Landon Cassill is looking forward to the NASCAR Sprint Cup Series' stop this weekend at the New Hampshire Motor Speedway (NHMS) for the Lenox Industrial Tools 301. Cassill and his No. 51 Security Benefit/Thank A Teacher Today Chevrolet team have shown significant improvement throughout the last month and are eager to build upon their results. 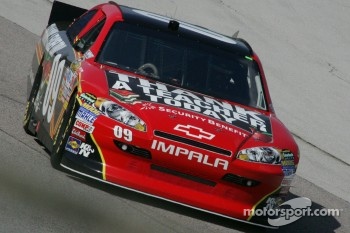 A comparison of Cassill's results from the first half of the season to the second half shows consistent progress. The 22-year-old averaged a 29th-place finish over the course of his first seven events with Phoenix Racing, which spanned from Auto Club Speedway to Dover International Speedway. In the last six events with the team, Cassill has averaged a 25th-place finish.

Cassill has three previous starts at NHMS. He competed in the 2010 Sprint Cup Series event, driving for Larry Gunselman. Cassill drove for JR Motorsports in 2008 NASCAR Nationwide Series competition. He put the No. 5 car on the pole, but finished in 34th-place following a crash. In 2007, Cassill raced for Hendrick Motorsports in the K&N Pro Series East. He started sixth and finished fourth.

Phoenix Racing has five Sprint Cup Series starts at NHMS, posting one top-10 finish, which came in 2009 with Brad Keselowski behind the wheel.

"Our results have steadily improved over the last few weeks. It's a combination of a lot of things that has us finishing better. First off, everyone on the Security Benefit/Thank A Teacher Today team has worked so hard from the start of the season. That hasn't changed a bit. But it takes time for a driver and his team to gel as one unit. We're developing a better understanding of what I need as a driver and how I can communicate what I need for the car. In short, we're preparing our cars better and making better adjustments on it during the race.

"Also, there's no substitute for seat time. There more laps I run, the more comfortable I feel at each track and have a better grasp of how to tackle it. I'm new to some tracks, but new to a lot of tracks in the Cup car. It's also different racing from the Nationwide Series so there is a big learning curve there. But, it's all coming together for us and I'm looking forward to building on what we've already accomplished for the second half of the season.

"New Hampshire [Motor Speedway] is a fun track. I've had a few races there and all were in different series. I think it's helped give me a good understanding of the track's characteristics. It's a fun track and really challenging. It's flat, so it takes finesse to round the corners. It's only a mile, which bunches up the field and keeps you on your toes. There's lots of action for sure.

"Besides seeing the improvements on the track, off the track we're starting to see more and more teachers get excited about our program. Our Facebook page (Security Benefit Racing) is starting to gain a bit more traction and I love hearing the comments from the fans about the sponsorship. It's been really cool to be a part of. Overall, this season is coming together for us."

Alpine has "no reason to be disappointed" with Le Mans podium

Kyle Larson: "I gave everything I had" to catch Hamlin

Larson on Michigan finish: "I just didn't want to screw it up"

Alpine has "no reason to be disappointed" with Le Mans podium