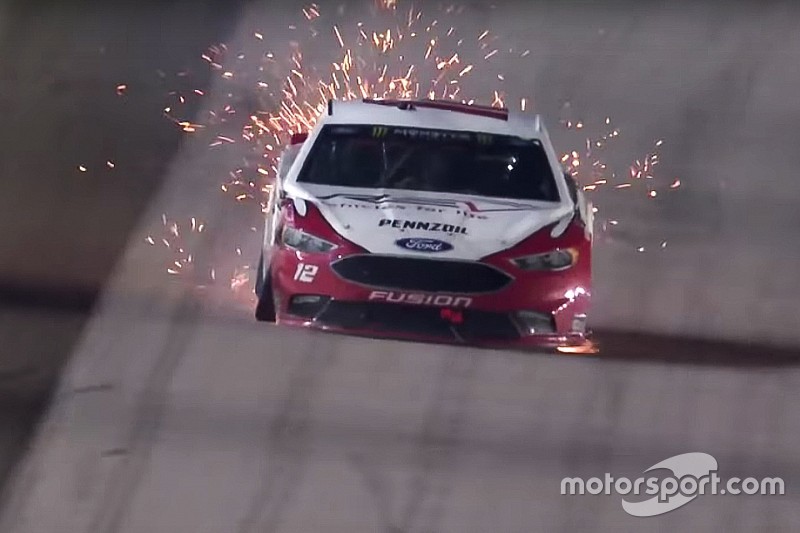 Both Ryan Blaney and Kyle Larson had cars capable of winning at Kansas Speedway and each won a stage, but it all came apart with 20 laps to go.

Larson had led 101 laps, but lost control of the race lead on a late restart to Kevin Harvick. As he fell back, Blaney attempted to pass him for the third position.

He aggressively side-drafted down the frontstretch and contact was made, sending the No. 12 Team Penske Ford careening into the wall with a flat right front tire.

"I don’t know. It was hard racing. I definitely take the blame on that one," said Blaney, who finished 37th after winning Stage 1 and leading 54 laps.

"I was just trying to side draft hard and the car was kind of light down the frontstretch there and it was just hard racing at the end. I about spun out in one and two on the restart, getting sucked around. We were making some spots back up and just trying to get back up to the front and tried too hard.

He later added, "I thought we made a good gain tonight and where our cars need to be.  Hopefully, we can carry that forward into the next upcoming weeks, but it was definitely my fault just trying too hard. I made contact and it cut my right-front down. I hate I got the 42 (Larson), but it was just hard racing.”

After the contact, Larson lost quite a bit of track position as the team made repairs to the left rear of his car during the caution period. The situation got worse after miscommunication led to the team failing to get all the lugs tight on the left rear, forcing him to make another trip down pit road.

But even though he was wounded, Larson was not yet out of the fight. He charged back up through the field and salvaged a fourth-place finish -- the highest-placing Chevrolet driver.

"Yeah, we just had a really good car tonight. Our Chevy was fast. Always run pretty good here, so it was nice to lead some laps. Thought we were going to have a really good shot to win there. Kevin (Harvick) was able to get to my outside and then was tight in traffic there. Yeah, and then Blaney was side-drafting really hard. I was as high as I could get. Made contact, whatever, and we had a bunch of damage.

"Hate that we didn't turn today into a win, but it's satisfying to see how much speed our car had tonight.

Matt Kenseth: “We obviously have some work to do"