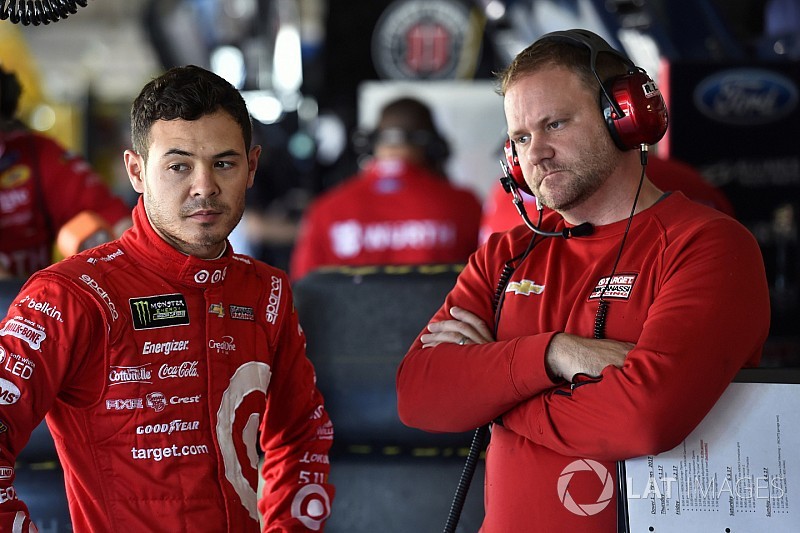 Kyle Larson will be without crew chief Chad Johnston for the next three weeks.

NASCAR busted the crew chief of the No. 42 Target Chevy for Section 20.4h; Section 20.15.2.2 — Rear Brake Cooling Assembly 1-2 f — “ductwork or other devices are not allowed to pass from one are of the interior of the vehicle to another or to the outside of the vehicle.” The infraction was detected in post-race inspection.

Johnston was also fined $75,000 and the team lost 35 driver and owner points. Larson’s second-place finish is encumbered per Section 12.10. Due to the penalties, Martin Truex Jr. will assume the Monster Energy Cup Series points lead.

For the third time this season, the No. 18 Joe Gibbs Racing team has been penalized for lug nut issues. Kyle Busch’s crew chief Adam Stevens was fined $10,000 for all five lug nuts not being properly installed (Sections 10.9.10.4 of the NASCAR rule book).

In the Xfinity Series, Thomas Machek, crew chief of the No. 01Chevy owned by Johnny Davis, also received a safety penalty for improperly installed lug nuts installed on Harrison Rhodes’ car. Mack was fined $10,000 and suspended from this weekend’s race at New Hampshire Motor Speedway.

Chip Ganassi Racing released the following statement regarding the penalties on the No. 42 Chevy: “We accept the penalty and will move forward.”