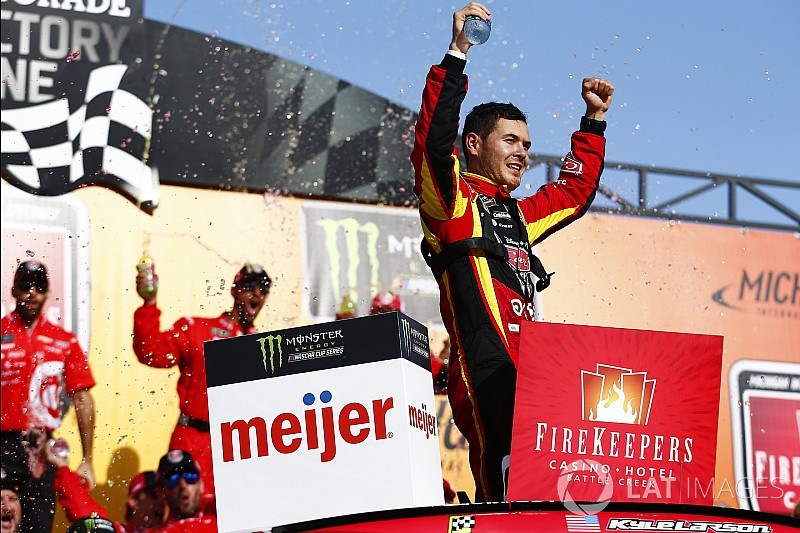 Larson led 96 laps for his third career win and his second MIS victory.

Truex shot out to the lead with the Toyotas of Busch and Kenseth tight behind him. Harvick moved up to fourth on the first lap followed by Elliott, Larson, Suarez, Hamlin ,Bowyer and Keselowski.

The leaders pitted on Lap 151. Kyle Busch was the first driver off of pit road followed by Jones, Earnhardt and Blaney — all who opted for two tires. Truex was the first car that pitted with four tires with Elliott, Kenseth, Harvick, Larson, Hamlin, Keselowski, Bowyer, Stenhouse, Kurt Busch and Jamie McMurray rounding out the top 15 However, Stenhouse received a penalty for being too fast entering pit road in section 1 and was forced to drop to the rear of the field. Thirty cars remained on the lead lap when the race returned to green on Lap 155.

With 40 laps remaining, Busch extended his lead to 0.884-seconds over Blaney. Elliott, Larson and Earnhardt rounded out the top five. On Lap 163, Larson dive-bombed Elliott and took over third. Halfway in the segment, Busch’s advantage was 1.7-seconds over Blaney followed by Larson, Elliott, Hamlin, Truex, Jones, Bowyer, McMurray and Johnson.

Busch drove out to a two-second lead with 30 laps to decide the race. Blaney, Larson, Elliott and Hamlin remained in the top five followed by Truex, Jones, Bowyer, McMurray and Johnson. Bowyer passed Jones for seventh on Lap 174. One lap later, Larson passed Blaney for second on the backstretch going into Turn 3.

Larson was closing in on Busch with 21 laps remaining when NASCAR called a caution for debris. Busch was 1.4-seconds ahead of Larson with Blaney third, Elliott, Truex, Hamlin, Bowyer, McMurray, Kenseth and Jones rounded out the top 10. Johnson was 11th followed by Earnhardt, Logano, Harvick, Kahne, Keselowski, Bayne, Kurt Busch, Suarez and Stenhouse.

There were 15 laps remaining in the race when Busch led the field to the green flag with Larson alongside. Blaney pushed Larson to the lead and Elliott passed Busch coming to the line followed by Hamlin and Blaney. Entering Turn 2, Bowyer, who was seventh, slammed into the wall to trigger the seventh caution. Larson held the lead followed by Elliott, Busch, Hamlin, Blaney, Logano, McMurray, Harvick, Truex, Suarez, Jones, Stenhouse, Kurt Busch, Johnson and Danica Patrick.

Larson held the point when the race returned to green with 10 to go, when the field came through Turns 1 and 2, Blaney checked up. Harvick got into the back of Blaney, Suarez got loose and was tapped by Wallace and collected Patrick and Allmendinger for the eighth caution.

Blaney, Harvick, Suarez and Allmendinger came in for repairs. Blaney received a penalty for too many men over the wall.

Larson shot out to the lead coming into Turn 2 by five-car lengths over Hamlin. At the line, Elliott moved up to second followed by Hamlin and Logano. Larson advanced to seven-tenths of a second over Elliott after two laps.

"Ryan Blaney gave me a heck of a push (on the next to last restart). I really have to thank him.His car took off good so I was happy he was behind me," Larson in Victory Lane. "I can't think these guys enough. The Cars 3 Chevy was really fast. It's a cool win for them and a great Father's Day present for myself. My dad's here, too.

"We've been so close to so many other wins. This is the second Cup win of the year but we've had six second-place finishes, which could be 30 more (playoff) points. All in all, good season so far and we'll continue to build on what we've got."

Click on image to watch Larson talk about his win.

There were 10 lead changes among four drivers.

Larson regained the points lead with his second win of the season. He has a five-point advantage over Truex.