“Just a great lap,” Truex Jr. said. “Dover has been so good to me. Our NAPA Toyotas have always been fast here.”

Our NAPA Toyotas have always been fast here.

Truex considers Dover his home track, as he grew up in nearby Mayetta, N.J.

Kurt Busch claimed the other front row position on the starting grid with a second-fastest lap time of 22.644 seconds in the No. 22 Penske Racing Dodge. The No. 27 Richard Childress Racing Chevrolet of Paul Menard, the final car to make a qualifying attempt, posted a lap time of 22.689 for the third starting spot.

“I had a good run in turn two and then I hit the rev chip in turns three and four and scared myself,” Busch said.

Carl Edwards claimed fourth in qualifying with a 22.705-second lap in the No. 99 Roush Fenway Racing Ford to give the first two rows of the starting grid parity, as all four manufacturers were represented.

David Ragan claimed the provisional pole early in the qualifying session with a lap time of 22.866 seconds in the No. 6 Roush Fenway Racing Ford, but gave up the top spot quickly to Jeff Burton, who ran a 2.829-second lap in the No. 31 Richard Childress Racing Chevrolet. The No. 11 Joe Gibbs Racing Toyota of Denny Hamlin then, briefly, moved to the top of the scoring pylon with a 22.801-second lap. By the end of qualifying, all three drivers were shuffled outside the top-10. 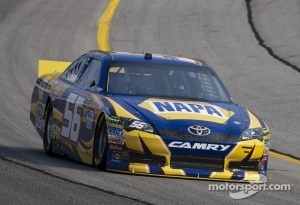 “It (the car) was more stable than it was yesterday (in practice),” Labonte said. “The track’s got a lot of good grip in it right now.”

Forty-four cars made qualifying attempts to claim the 43 starting spots for Sunday’s race. Mike Skinner was the lone driver who failed to post a fast enough to time to get into the race after he scraped the wall during his qualifying laps.