A look back at NASCAR's first-time winners in 2017 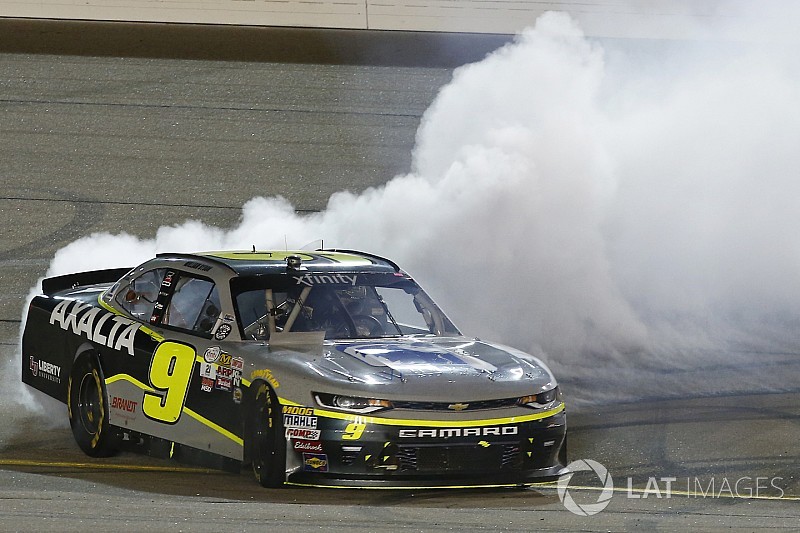 NASCAR's 2017 season saw a grand total of 15 first-time winners across its three national divisions. As several star names step aside, these drivers are stepping up to carry the torch into the future. 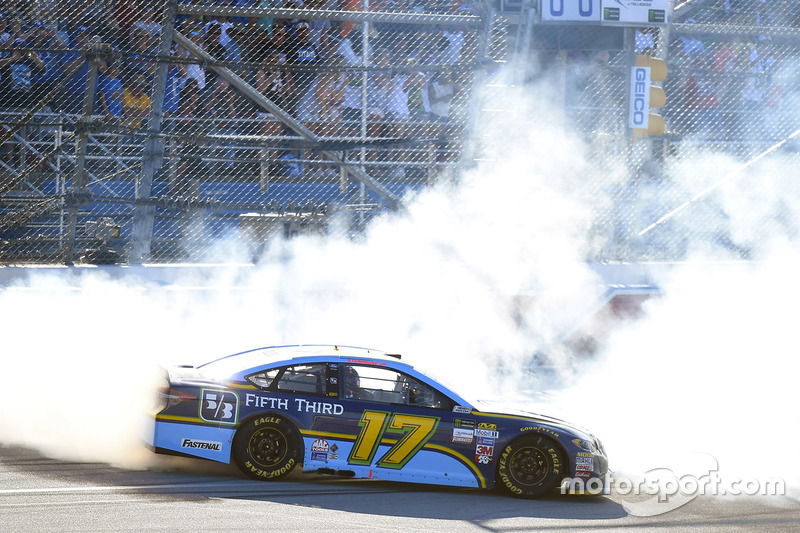 We start with the Cup Series. In his 158th career start, Stenhouse held back Kyle Busch and Jamie McMurray to take his maiden win. With the proverbial glass ceiling now shattered, he went on to win again seven races later at Daytona. 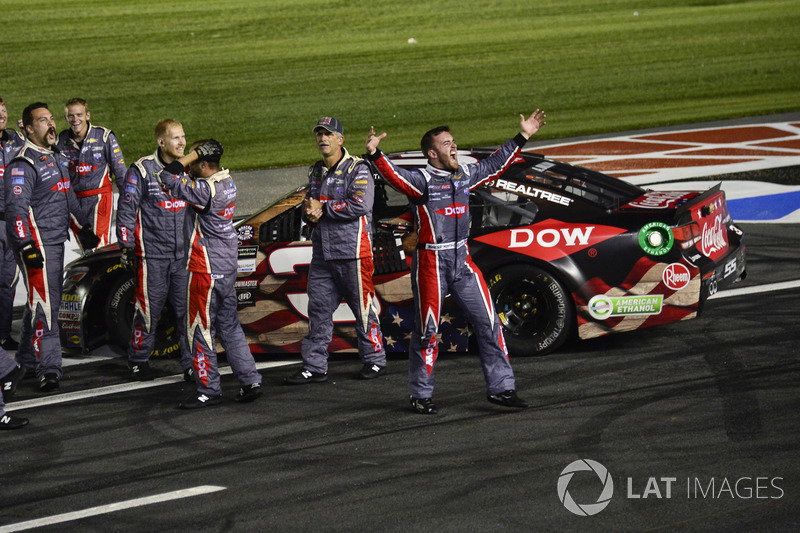 Austin Dillon captured his first win in NASCAR's longest race, playing the fuel-mileage game to snatch the win out from under the two men that would end up 1-2 in the championship - Martin Truex Jr. and Kyle Busch. The victory came in his 133rd career start and marked the first win for the No. 3 in the Cup Series since the late great Dale Earnhardt's 76th and final triumph 17 years ago at Talladega. 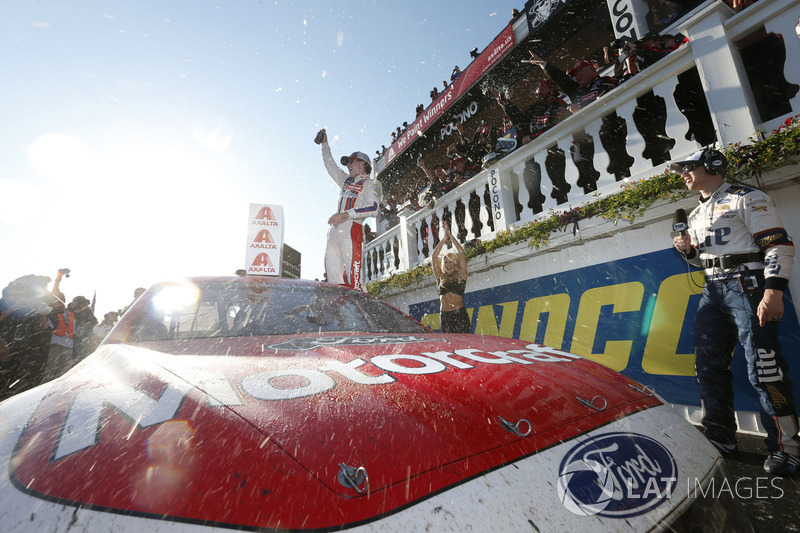 Ryan Blaney's Pocono win is perhaps the most impressive of the three newest Cup winners. He passed former series champion Kyle Busch with just ten laps to go and fended off another champion in Kevin Harvick to hang on to the race win. It was the 99th victory for the legendary Wood Brothers team and their first non-plate win in 16 years. For Blaney, the win came in his 68th career MENCS start. He will now head over to Team Penske in 2018, driving the No. 12 Ford. 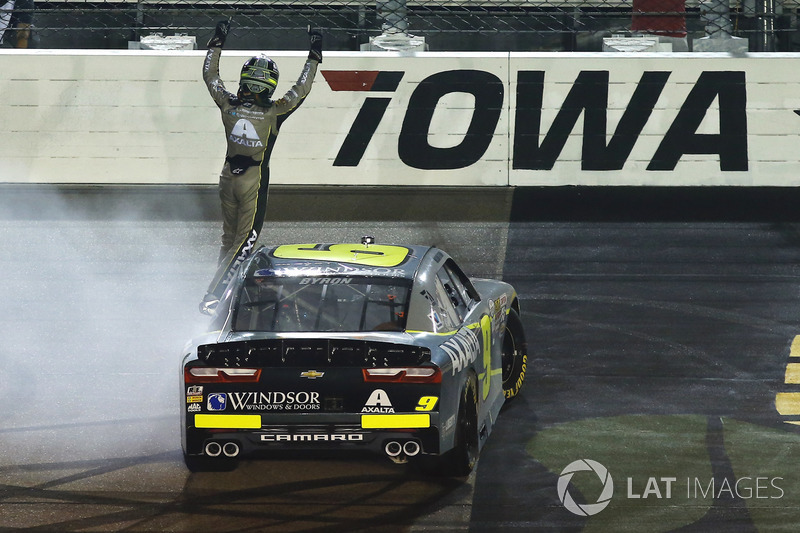 Just one week after missing out on his first Xfinity win by inches, William Byron dominated at Iowa Speedway. The rookie sensation would win three more times en route to the 2017 Xfinity title. Next year, he will take the wheel of the iconic No. 24 Hendrick Motorsports Chevrolet as he steps up to the premier division. 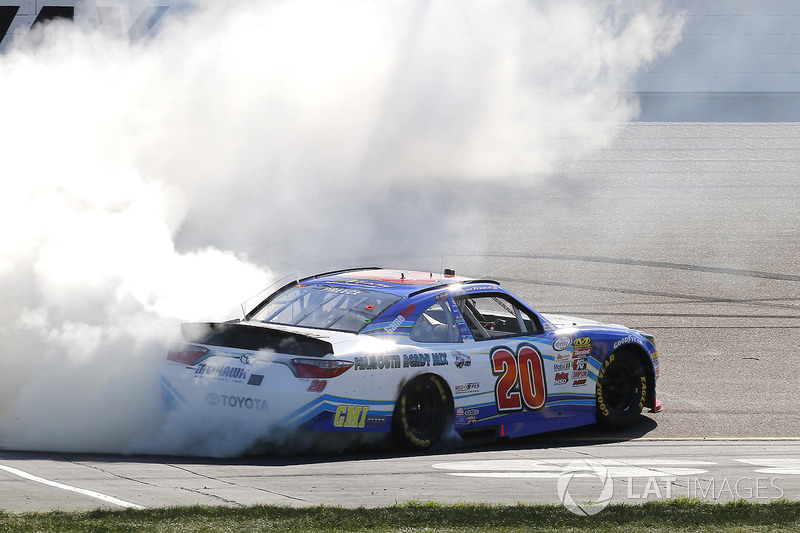 At the same track one month later, history repeated itself with another first-time winner. In just his second appearance with Joe Gibbs Racing, Preece led 141 of 254 laps and captured the checkered flag. He took a chance, giving up the opportunity to run the full season with smaller outfits so he could do just four with one of the best. The 2013 NASCAR Whelen Modified champion will compete in a partial schedule with JGR once again in 2018. 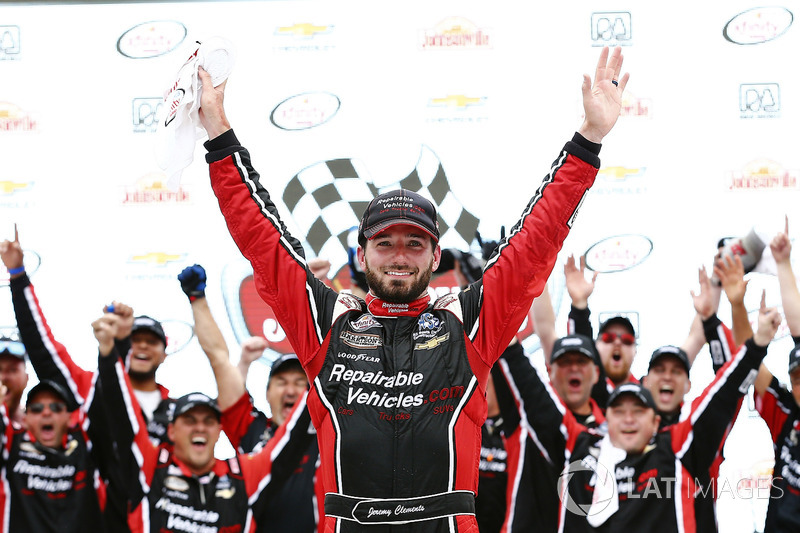 In one of the wildest finishes of the season, Jeremy Clements collided with Matt Tifft as they raced towards the white flag at Road America, causing both to spin. The driver-owner was able to quickly get his No. 51 Chevrolet pointed in the right direction after a 360 spin and drove off with the race win in hand. The upset victory came in Clements' 256th career start, having made his Xfinity debut 14 years ago in 2003. 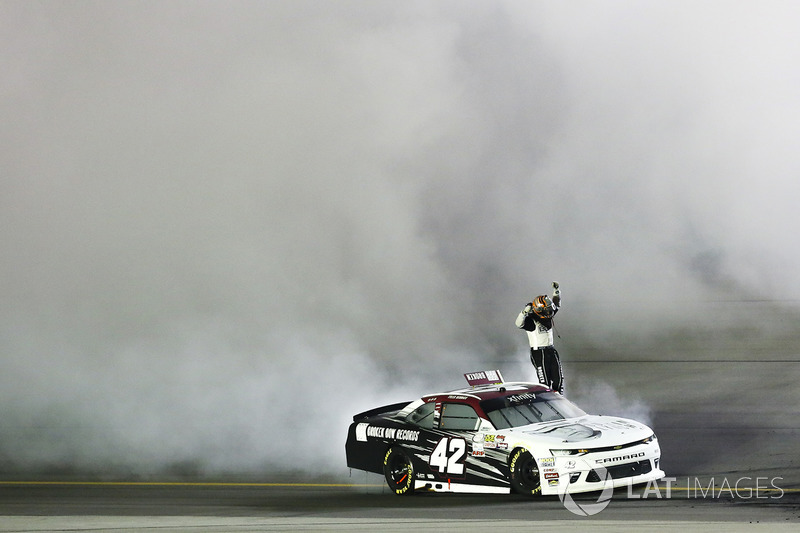 Tyler Reddick was another rookie to find Victory Lane in 2017. Following the 'I like winners' mantra of team owner Chip Ganassi, he dominated at Kentucky, lapping up inside the top ten and crossing the finish line with a massive 14.540-second lead over his closest competition. After a partial schedule with Ganassi this year, he will move over to JR Motorsports with a full-time ride in 2018. 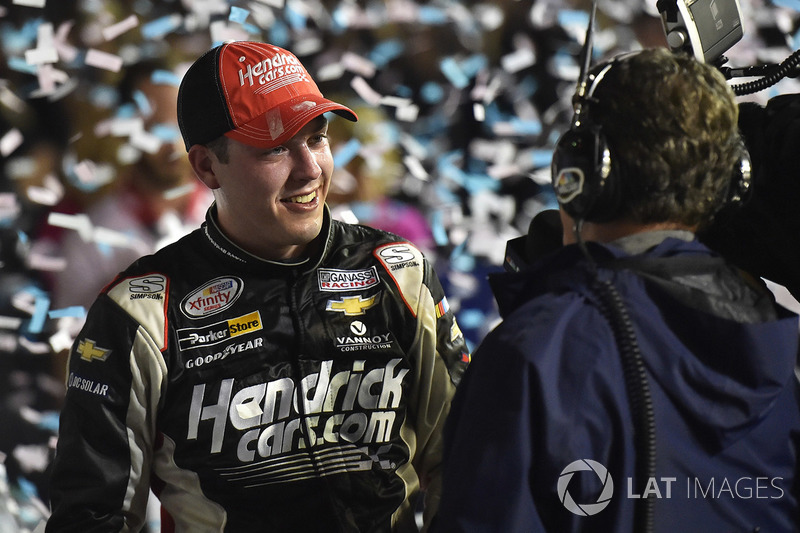 Alex Bowman's career is an interesting one. After competing full-time with Robby Benton in the 2013 NASCAR Xfinity Series season, he became a full-time Cup driver with BK Racing in 2014. Then, he abruptly lost his ride just before the 2016 season. He ran nine races with JR Motorsports in the Xfinity side that season, ultimately getting the call to replace a sidelined Dale Earnhardt Jr. in ten Cup races. As the driver of the No. 88, he nearly won at Phoenix in November before a late-race incident cost him his chance. But he will get many more opportunities as he was later named Junior's official successor for the 2018 season. But despite all that, it wasn't until this past October's Xfinity race at Charlotte where he won finally his first NASCAR race, driving for Chip Ganassi Racing. 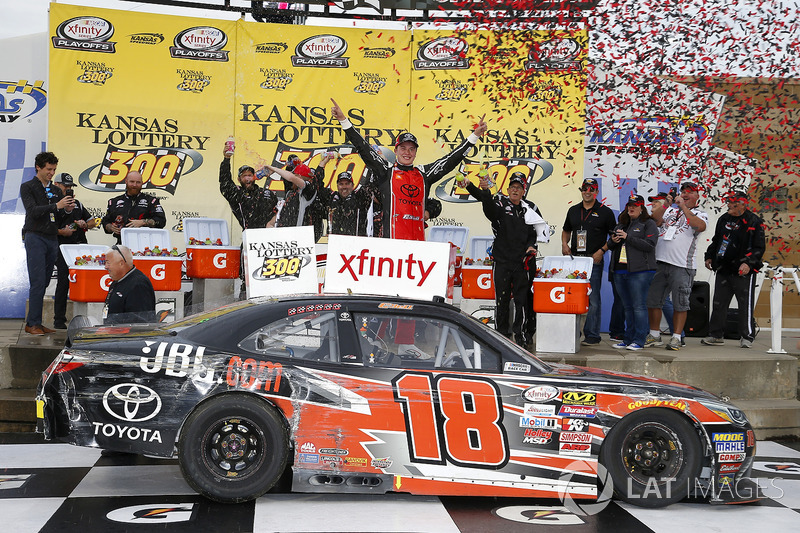 As the right side of this car shows, Christopher Bell's first Xfinity win didn't come easy. The newly crowned NASCAR Truck Series champion found himself battling with teammate Erik Jones late in the going at Kansas. With less than five laps to go, he slid up in front of Jones, but the latter had a massive run and ran into the back of Bell, putting both drivers in the wall. Jones fell off the pace with a flat tire as Bell nursed his Toyota Camry home for his first ever Xfinity win. He will become a full-time NXS driver with Joe Gibbs Racing in 2018. 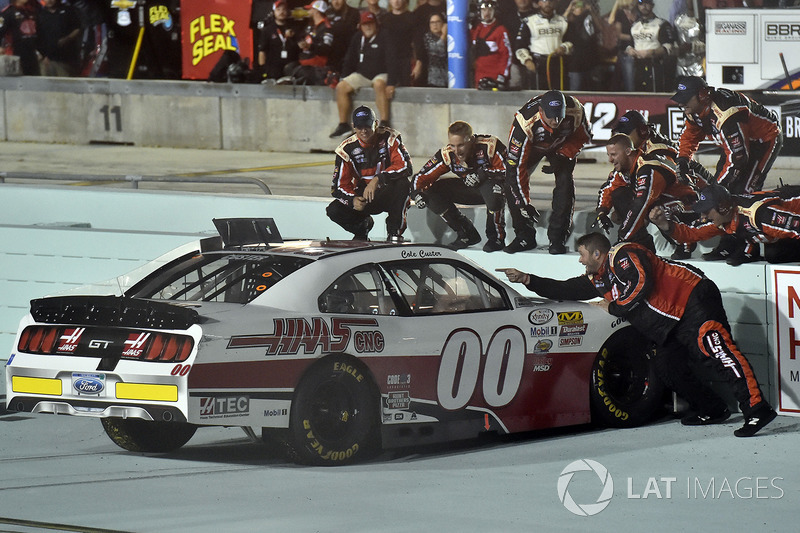 Cole Custer just missed out on advancing into the Championship 4 in the NASCAR Xfinity Series, and now he has to be wondering what could have been. In the finale, he put on an incredible performance, leading 182 of 200 laps and winning by 15.405 seconds. 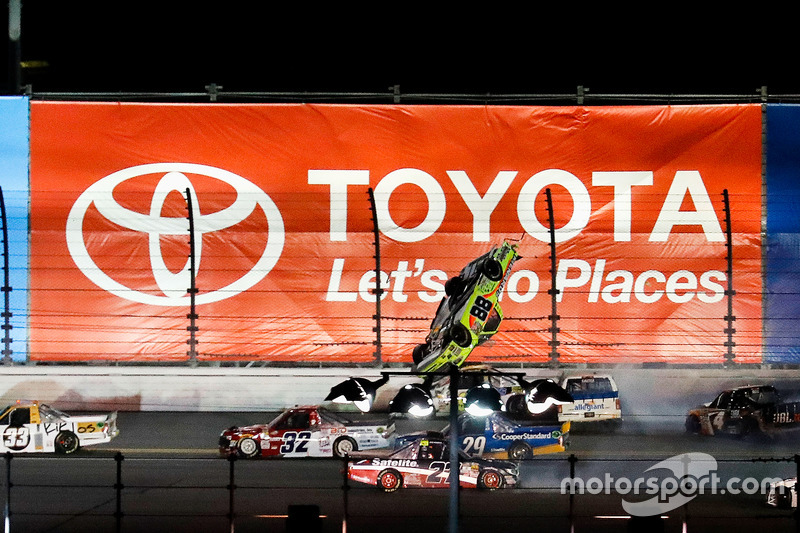 See that No. 33 to the far left of the picture? Yeah, that's Kaz Grala. The 18-year-old won pole position for the season-opener, but he took the white flag in sixth. But as the field raced out of Turn 2, contact was made and the seas parted for Grala as trucks went spinning one way and flying in another. 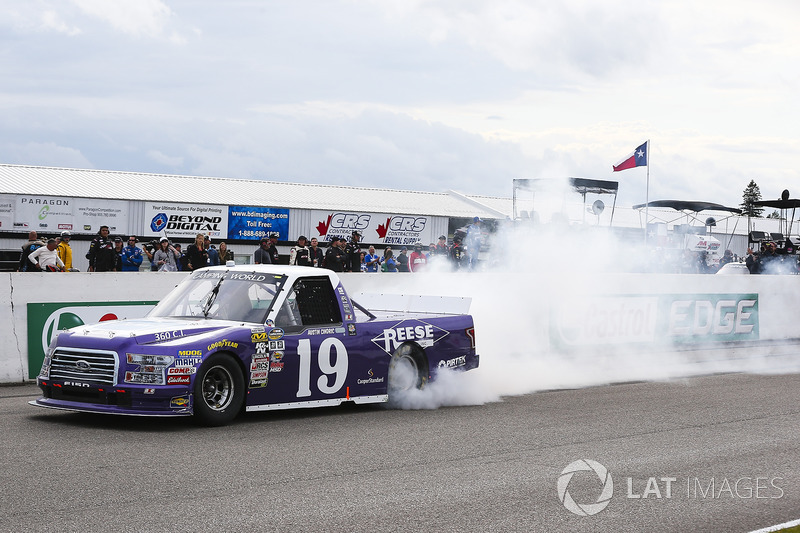 Austin Cindric's first win came at the expense of Grala's second. On the final lap of the Truck race at Canadian Tire Motorsports Park, Cindric got into the back of Grala and sent him around. The controversial win launched Cindric into the Playoffs and ultimately, the Championship 4. He ended up third in the CWTS standings. Next year, he will run a partial Xfinity schedule with Roush Fenway Racing. 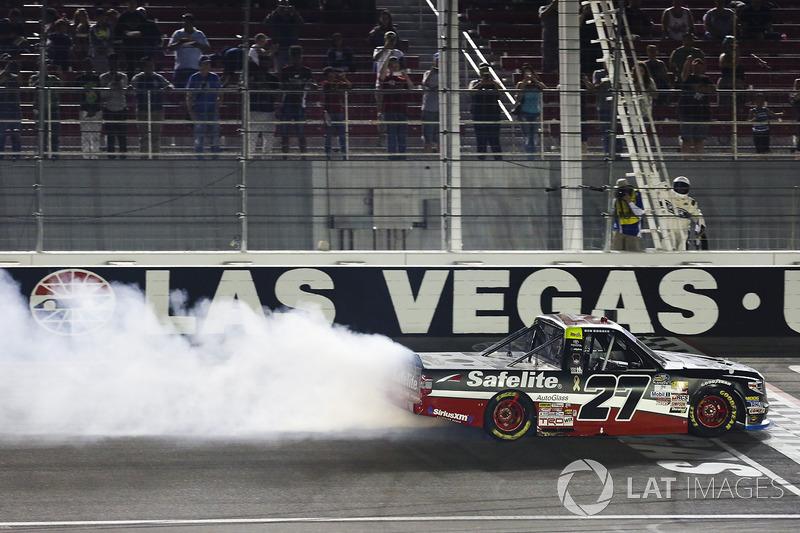 After multiple close calls, it was only a matter of time before Ben Rhodes found his way into Victory Lane. Fortune finally smiled down upon him at Las Vegas Motor Speedway this year as he was able to hold off a hard-charging Christopher Bell to win in 45th career start. 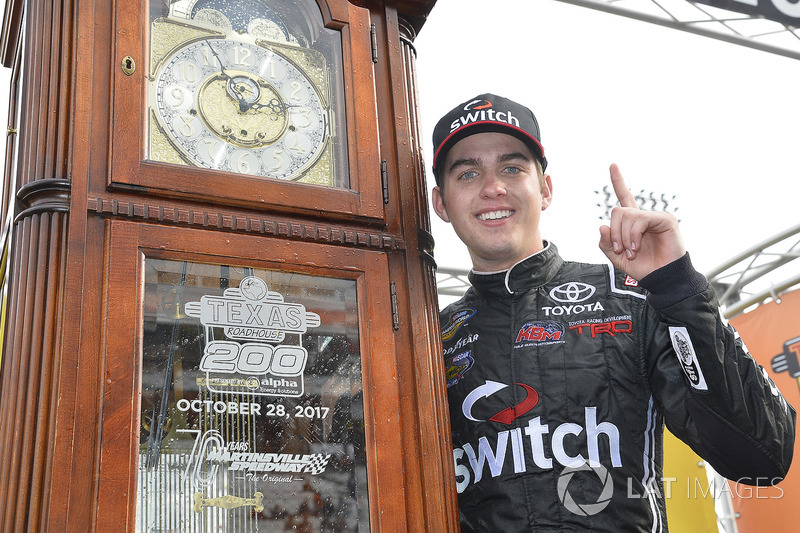 On a restart with just ten laps to go at Martinsville, the rookie Kyle Busch Motorsports driver made an impressive pass to the outside of Matt Crafton and held on for the race win. 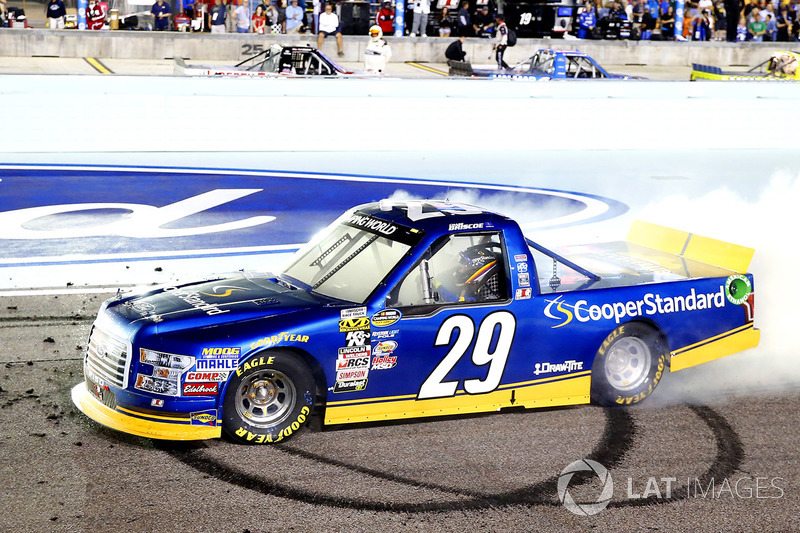 Much like the Xfinity Series, the CWTS finale produced a first-time winner as well. Briscoe concluded his rookie Truck season with a dominant victory at Homestead-Miami Speedway, leading 81 of 134 laps. The win was even more special for the team as it was Brad Keselowski Racing's final race before shutting their doors. Briscoe will now move over to Roush Fenway Racing for a partial schedule in the NASCAR Xfinity Series in 2018.