NASCAR President Steve Phelps vows to "double down" on the sport 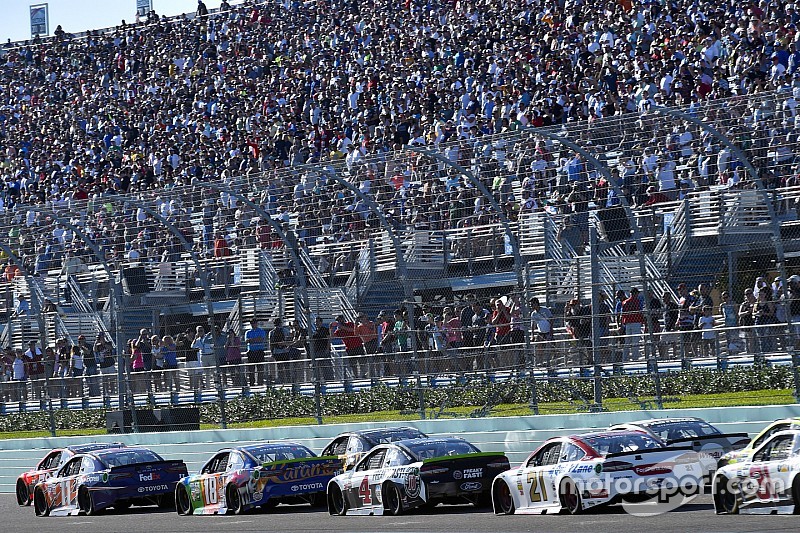 Expressing an air of optimism, NASCAR President Steve Phelps said Sunday he believes the sport’s “best days are ahead of it.”

With the recent announcement NASCAR has bid on purchasing International Speedway Corp., the recent changes in executive leadership and the unveiling of a new rules package for 2019, it would seem NASCAR itself may be in an era of transition.

During a “State of the Sport” news conference Sunday at Homestead-Miami Speedway, Phelps said while there may be structural changes ahead, the sport’s core goals won’t change.

“I can’t speak to the ISC acquisition, but what I will say is to me, if you look at the message that has been sent from Lesa Kennedy and Jim France, it’s that we’re going to double down on this sport because we believe in it,” Phelps said.

“We have a lot of opportunity, and we’re excited about where we’re going.”

Sunday’s news conference was in stark contrast to some in recent years with former NASCAR Chairman and CEO Brian France, which at times became combative when questions he perceived as negative were asked.

Phelps didn’t have all the answers on Sunday, but he appeared as forthcoming and frank as possible and expressed an air of confidence in the future.

‘We always have work to be done, for sure. The sponsorship component of this, there are – and I’ve been accused of being pollyannaish before. I believe the state of sponsorship in this sport continues to accelerate in a positive manner,” he said.

“I went to a Penske (sponsorship) summit that I was fortunate enough to speak at, and I was speaking to Bud Denker, Tim Cindric, and they were saying, hey, we have 15 new sponsors here. That's fantastic. You talk to Joe Gibbs; hey, we’ve got a bunch of new sponsors here, sponsors that have been signed at the sanctioning body.

“We’re always seeking to have new sponsors in the sport. We have a competitive advantage over other sports, I believe, because of our great fan base. Our fans understand what it means to be a sponsor of NASCAR.”

While TV ratings have declined this season, Phelps emphasized digital and social media engagement has been “through the roof.”

He also said he was confident those who work in NASCAR – executives, teams and drivers – are focused on battling the headwinds the sport may face.

“Our drivers are the single most important ambassadors for our sport,” he said. “We don’t have 1,600 players like the NFL. Every driver is important to drive star power.”

Still, Phelps believes the sport will always be defined by its quality of racing – which NASCAR constantly seeks to address and perfect.

“The season overall, I think we’ve had a tremendous amount of story lines, as I said, and I believe that the racing product is as good as we’ve seen. I think that bodes well for the future,” he said.

“I am truly excited about it.”