NASCAR Roundtable: Which driver will snap their winless streak next? 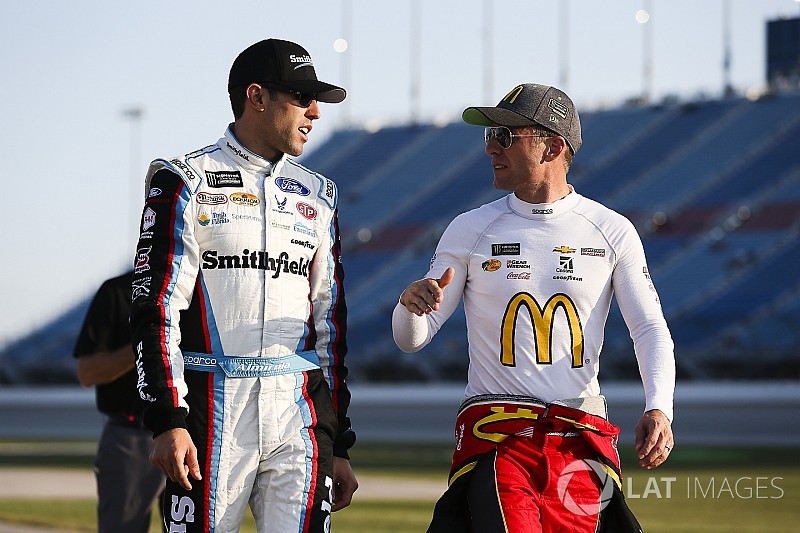 On this week's edition of the NASCAR Roundtable, we talk winless streaks, Kyle Busch's growing frustration and the surprises so far in the 2018 season.

Jim: With the way he has been running this season and the overall strength of the Stewart-Haas Racing organization, I feel like Aric Almirola would be the best candidate to break his winless streak. In the short time he's been at SHR, Almirola already came painfully close to winning the season-opening Daytona 500. My second choice would be Allmendinger simply because he always seems to be a threat on the road courses regardless of how well his season has gone.

Nick: Aric Almirola has to be the favorite among these names. SHR has been remarkably strong this year and Almirola is no exception, coming within half a lap of a Daytona 500 win back in February. But after leaving Daytona, he has continued to perform with no finish worse than 14th.

Tim: I agree that Aric Almirola will probably be the next driver of the four in the list to score a win. He came just half a lap away from winning the Daytona 500 and has been running in the front of the pack almost every weekend. I think he’ll win before the series returns to Daytona in July.

Tom: Aric Almirola will be the next to win out of the drivers currently on a long streak and that elusive victory will demonstrate further how comprehensively dominant Stewart-Haas Racing's operation is right now. His drive at Daytona was one of the best of his career and he's kept in touching distance with his team-mates, which is a promising sign. AJ Allmendinger's Martinsville performance was a real improvement, so he's worth keeping an eye on.

Kyle Busch has been on the cusp of victory, but continues to come up short. He is also getting increasingly frustrated by it. Do you see the No. 18 winning soon and where? If not, how do you think it will affect Kyle and the team?

Jim: This storyline seems eerily similar to last year. There was actually a point last season when no Joe Gibbs Racing drivers had won a race but that certainly changed by season's end. I could see Busch winning at either at Texas or Bristol coming up - or both. If you continue to put yourself in position to win - which the No. 18 team does repeatedly - it will be a question of when, not if, Busch will win. The frustration, however, may continue if it's Stewart-Haas Racing drivers who repeatedly block Busch's road into Victory Lane.

Nick: The win will come, but Busch seems a bit too aggravated this early in the season. He's highly competitive and tends to wear his emotions on his sleeve, but they have had a fantastic start to the season. He'll win multiple races this year, but he can't let his emotions get the best of him before then.

Tim: I think it’s only a matter of time before Kyle Busch is back in Victory Lane again and it could come as quickly as next weekend at Texas Motor Speedway. He always runs well at Bristol so he could go from no wins to joining Kevin Harvick as the only multiple race winner in a matter of weeks.

Tom: Kyle Busch's post-race interviews, when he's not embroiled in a Twitter spat with TV coverage, are picking up an increasingly irritated tone. It's understandable and his comment that he's on an "island" between first and third rings true. He's likely to only get more frustrated. But does it matter? He's top of the standings and he was a force to be reckoned with when he hit the playoffs last year.

With the first off-weekend of the season coming up, who has surprised you (good or bad) so far in 2018?

Jim: While I believe the Stewart-Haas organization was headed in the right direction, I was not expecting the dominating performance its drivers have produced so far this season. Three wins already by Kevin Harvick and Clint Bowyer ends a 190-race winless streak - that's an impressive start to the year and I don't suspect it's going to slow down anytime soon. As far as a bad surprise, I'm genuinely perplexed by the struggles Hendrick Motorsports has been going through. Martinsville is not a downforce track but even there none of the four HMS drivers were legitimately in the hunt for the win. It's certainly an unusual position for that organization.

Nick: The dominance of Stewart-Haas Racing has been quite a surprise. They have come out of the box swinging and two of their drivers have already made visits to Victory Lane. At the other end of the spectrum is Hendrick Motorsports, which has struggled mightily since Daytona and don't seem to be making much progress

Tim: Debuting a new car in the NASCAR Cup Series can present a bit of a learning curve, but I never expected Hendrick Motorsports to struggle like they have so far this year. I’ve really been surprised to see Stewart-Haas Racing come out of the box as strong as they have this season. If not for Harvick’s accident at Auto Club and Aric Almirola’s incident on the final lap at Daytona, SHR could have easily been undefeated so far this season.

Tom: Stewart-Haas's dominance of the season has been truly surprising. The headline was the three wins in a row for Kevin Harvick and now Clint Bowyer has ended a long streak without a win. Considering the disadvantage Ford was expected to have in the face of a new Camaro and Toyota's successful Camry, it's no mean feat. It's tempting to say that the Camaro's struggles and the new technical inspections have helped Ford, but SHR has outperformed Penske too, so the organisation deserves big credit.

The Trucks will now be off until their race at Dover on May 4th and there have been four different winners in as many races this season. Do you expect that streak to continue?

Jim: Yes. I believe Ben Rhodes will finally break into Victory Lane. He's led the most laps in the series so far this season and won stages but putting together a complete race has been a problem. I don't believe you can keep up that level of performance and not be rewarded for it sooner rather than later.

Nick: I'm going to say yes. In fact, this has happened every year for the last three seasons with four different winners in the first four races. As for who will be the fifth different winner, I'd put my money on Matt Crafton or Ben Rhodes. Both of those ThorSport drivers have run well in 2018 and have led laps.

Tim: I think we’ll see a Thorsport Racing truck in Victory Lane at Dover and it could be either Matt Crafton or Ben Rhodes. If Rhodes’ pit crew wouldn’t have had their trouble at Martinsville I feel he could have won that race last weekend instead of John Hunter Nemecheck.