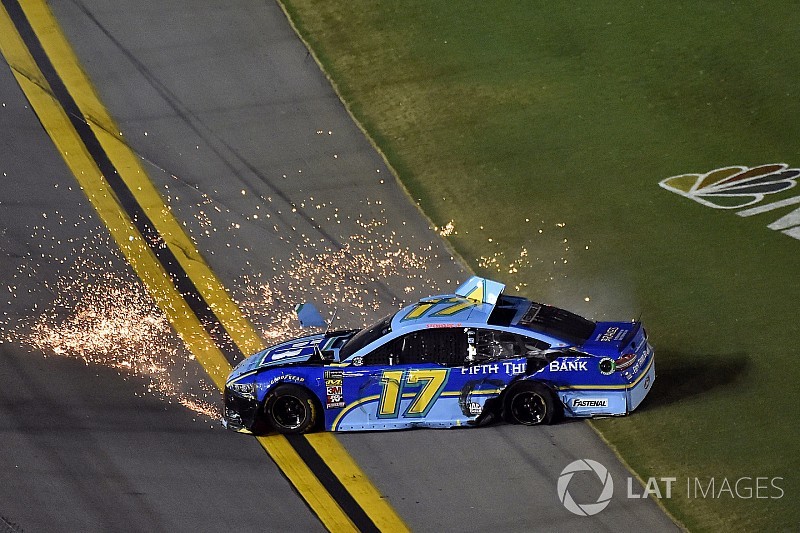 On this week's edition of the NASCAR Roundtable, our team takes a look back on a wild weekend of racing from Daytona International Speedway.

Ricky Stenhouse Jr. received a lot of criticism from the garage, media and fans after the race Saturday night. Was the criticism warranted and what are your thoughts on the incidents he was involved in during the Coke Zero 400?

Jim: Well, considering Stenhouse took full responsibility for the incidents he was involved in Saturday night, I believe the criticism was warranted. But I also believe Stenhouse was doing exactly what he thought what was necessary to earn the victory. After all, Stenhouse is currently not in position to qualify for the playoffs without one and Saturday night was the last superspeedway race before the playoffs and possibly Stenhouse's last, best chance to pick up a win.

Kenny: Ricky Stenhouse gets paid to try to win races and make the playoffs and contend for championships. He isn’t paid just to ride around. It’s hard to fault a guy for trying too hard. As for the incidents, contact with Brad Keselowski that started “the Big One” was as much the result of William Byron blocking Keselowski as Stenhouse running over the Team Penske driver. The contact with Kyle Busch, which triggered another multi-car crash, was clearly his fault however.

Nick: I had no problem with it. He didn't do anything blatant, he was just driving aggressively and pushing hard. Mistakes were made, but that's racing. If I was his team owner, I'd want to see my driver going for it and not holding back, just like he did Saturday night. He can't afford to back down when he is sitting on the edge of the playoffs. He screwed up and ruined a lot of people's races, but he also won the first two stages.

Justin Haley nearly collected his first win in just his second Xfinity Series start at Daytona before being black-flagged for passing below the yellow line. Do you think the call was justified and does the yellow line still serves its purpose?

Jim: The call was absolutely justified. In fact, I don't think I've seen a more clear-cut violation in a race since the rule was first implemented. I certainly don't think Haley intended to go below the line - in fact there appeared to be enough room that he could have avoided doing so. Nonetheless, rules aren't rules unless they are enforced and NASCAR did well to enforce this one. I have no problem with the yellow line rule, which basically ensures all of the racing action stays on the racing surface. They last thing we need at superspeedways is for drivers to take more risks on parts of the track that were never designed for racing.

Kenny: Yes, the call was justified. The rule states a driver cannot go below the yellow line and advance his position, both of which Haley did. It doesn’t matter if the move was intentional or not. It happened. The rule was put in place for safety reasons and the majority of drivers abide by it. It only becomes an issue when someone doesn’t.

Nick: Per the rule book, the call was justified. They couldn't just ignore it. Doesn't mean I like it though. Personally, I'd rather have the yellow line rule eliminated for the final lap of these races. They got rid of it to prevent accidents, but as we've seen time and time again, a wreck at the end of these plate races is inevitable. Let them use the whole track so we don't have another situation where a first-time winner has to stop mid-celebration because he dipped his left side tires below a line after making an incredible move at the run to the checkered flag.

Tim: Per the NASCAR rule book, the call was justified and I feel if NASCAR would have wavered on the call it would have caused more negative reaction than what was seen after the call. If a rule is written in black and white, call it and NASCAR did just that. You have to respect the guts it took for Justin Haley to make that move, but at the same time, the rule is there for a reason and an infraction has to be addressed to enforce the rule.

Now that Erik Jones has earned his first win, who might be the next to join the first-time winners’ club in Cup?

Jim: I'm still riding the Chase Elliott bandwagon on this one. Although no one at Hendrick Motorsports this year is setting the world on fire, I still believe Elliott is capable of winning at any time if he has the car behind him. His No. 9 team is certainly talented enough to get the job done and I believe the driver is, too.

Kenny: Chase Elliott. He’s too talented and his team is too good not to be in victory lane. They’ve been close many times. Eventually it happens, just as it did for Jones Saturday night in Daytona.

Nick: I mean, Chase Elliott has to get that elusive first win eventually. He keeps coming within arm's reach of it. Beyond him, I'd look to Jones' teammate Daniel Suarez as another potential first-time winner this year.

Tim: I have to agree with my colleagues on Chase Elliott. I would have bet a week’s pay he would have had one or more wins by now at the start of the season. He’s shown improved speed recently and I still think he could score a win at any moment.

Brad Keselowski has three wins at Kentucky Speedway (2012-14-16). Can he get his fourth win at the track on Saturday?

Jim: Keselowski's driving a Ford on a 1.5-mile track, so that is likely to put him in a good position to start with and combine that with his success at the track and I would consider him a strong contender for the victory. To get it, though, he will still have to get past the Big 3 - Kevin Harvick, Kyle Busch and Martin Truex Jr. That will be no easy task.

Kenny: It’s certainly one he should have marked on his calendar. Keselowski has more wins than any other driver at the 1.5-mile track and is No. 2 in laps led. His team’s mile-and-a-half program is good, but not great. A win isn’t out of the question, but it won’t be easy.

Nick: Keselowski is in need of a win and Kentucky would be a great place for him to get one, but with the way 2018 has been going, he'll have to get through the Stewart-Haas Racing armada first. All four of those cars led laps at Chicagoland and the team has been dominant at intermediate tracks this year.

Tim: I still think you have to look at the big three as favorites to win on Saturday based on their performance so far this season on 1.5-mile tracks, but if there is one who could beat them at Kentucky Speedway it would be Brad Keselowski. If you believe in trends, then Keselowski should be your pick this week.