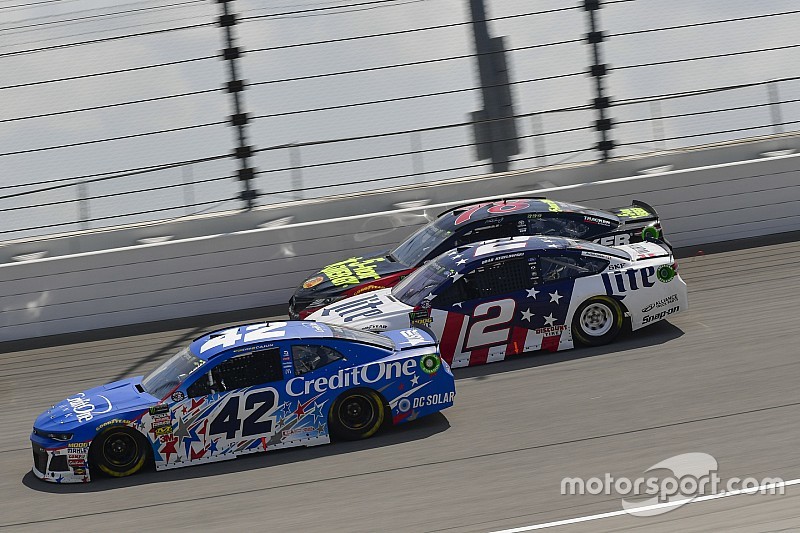 The NASCAR team at Motorsport.com discuss the playoff picture heading into an elimination race at Kansas Speedway and who will find themselves out of it when the checkered flag flies.

This week's race at Kansas Speedway will be the end of the second round in the NASCAR Cup playoffs. Who do you think will be the next four to fall in the playoffs?

Jim Utter: I have a feeling there may be some surprises out of Kansas. So, right now I'm going to go with Alex Bowman, Ryan Blaney, Kyle Larson and reigning series champion Martin Truex Jr. as not making the cut to the Round of 8. I have been very surprised with the performance of Truex and the No. 78 the past two races, especially considering he was in an excellent position to win at the Charlotte Roval which would have allowed him to be safely out of this conversation altogether.

Nick DeGroot: It's a difficult call because there are some big names in jeopardy, but I think Kyle Larson and Alex Bowman are definitely out of it. I also think Ryan Blaney may be on his way out, but his a bolder prediction: Brad Keselowski will knock out Clint Bowyer. The No. 2 team has been very competitive since the playoffs began and although Bowyer has a points buffer over the cut line, he is still very close to the bubble spot. Should Keselowski win, the driver on the bubble will find themselves out of it.

Tim Southers: I think we’ll see Bowman, Larson, Ryan Blaney and Brad Keselowski will be the next to fall out. I know Martin Truex Jr. is near the cut off line too but I think he’ll turn things around and be in contention for the win this weekend at Kansas Speedway.

How impressive is it that all four Stewart Haas Racing drivers have won at least one race this season?

Jim: It's very impressive but if you also throw in the races by each driver in which they looked like they had the opportunity to win but came up short, and it's hard to think of a race this year in the Cup Series where a Stewart-Haas Racing driver could not have come away the winner. Multi-car teams have been successful but rarely are they strong from top to bottom. The last time a team showed this kind of strength was when Roush Fenway Racing but all five of its cars in the playoffs back in the 2005 season.

Nick: SHR has done a phenomenal job this year and although Almirola's Talladega win may be written off as plate racing's unpredictability, he has been in serious contention several times this year. All four of those drivers have had the chance to win more than one race, which really is something.

Tim: I think this will be viewed as one of the more memorable events in the history in NASCAR when fans and historians look back on this season someday. While all four drivers have recorded wins and two of them have won NASCAR Cup Series championships, I think it’s even more impressive that Aric Almirola won his first race with the team in his first season at SHR with a new chief and team members.

How surprised were you with the strategy used by the SHR drivers at Talladega?

Jim: It was clear as the weekend progressed that SHR had a definite plan in place for the Talladega race. I'm not so surprised with the strategy they used. I'm actually more surprised that the rest of the field couldn't seem to figure out that unless they put together a similar group of cars in line to patiently run down the SHR group, there was no way they were going to catch them. That was especially true when the rest of the field seemed content to race two or three or four-wide while the single line of SHR cars drove off into the sunset.

Nick: I wasn't surprised that they tried it, but I was extremely surprised with how well it worked out for them. Without that caution in the final five laps, those four cars were just going to drive off together and race amongst themselves. You don't ever see that at modern Talladega. It was wildly impressive.

Tim: I think their plan was a reflection of how organized and structured their entire team has been over the past couple of seasons. I think once they all qualified together, their plan made sense. What really surprised me is how the four drivers all worked together throughout the entire race and were so patient with one another. Their strategy I think affected how the race played out and for us older folks have covered the sport for a long time, this race was one of the more unusual events at the 2.66-mile track.

The Xfinity Series begins their semi-final round at Kansas. Who do you think will be the first to punch their ticket to Homestead-Miami Speedway?

Jim: It's hard not to pick Christopher Bell, since he won this race a year ago and he has been impressive in the Xfinity playoffs so far this season. But if there is someone else who could step up, I think it may be Elliott Sadler. He has been strong at Kansas in recent seasons and JR Motorsports teams have been solid on the intermediate tracks this season.

Nick: Justin Allgaier or Christopher Bell are the obvious choices, as they have a combined 11 wins this year. But if I had to pick between the two, I'd go with Allgaier.

Tim: I think it will be either Christopher Bell or Justin Allgaier picking up the win. They’ve been two of the more dominant drivers this season as far as running up front and winning races and I don’t think there is no reason to think they will fall back real far this weekend at Kansas Speedway.