NASCAR Roundtable: Looking ahead in the playoffs and Silly Season 2018 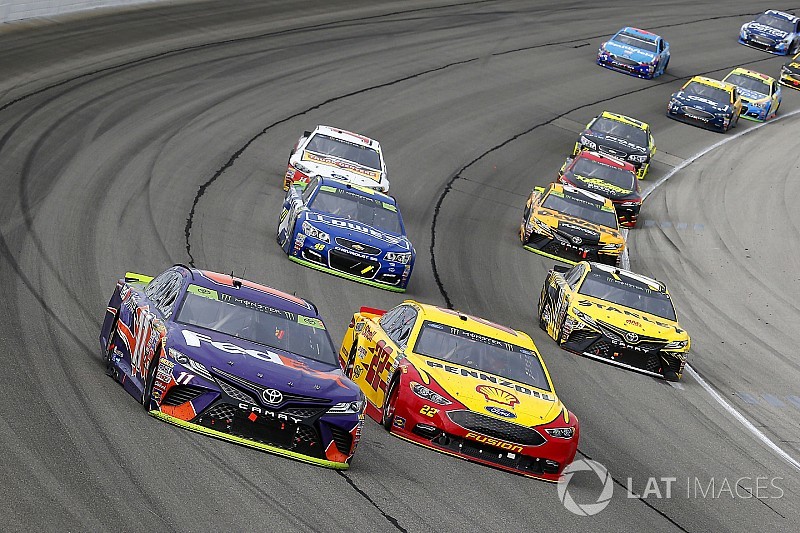 Our team of experts debate some of the biggest questions in NASCAR this week.

Martin Truex Jr. continued his strong run on 1.5-mile tracks this season winning at Chicagoland. It appeared Kevin Harvick had a strong car as well. Do you think we'll see them up front at New Hampshire Motor Speedway as well?

Jim: I expect to see both of them in the mix for the win on Sunday. There's no reason to believe Truex is going to back off just because he's already locked in Round 2. He still has two races to add to his already series-leading playoff point total. Continuing to win Stages and races will just make him a bigger lock to reach the Championship 4 at Homestead. Harvick's team has been getting stronger as the season has gone on and typically runs well at New Hampshire, including a win in this race one year ago.

Lee: I think it would be foolish not to expect the No. 78 Furniture Row Racing Toyota to be up front at any track on the tour. Loudon has been one of Truex’s favorite tracks over the years. In July, he won the pole and tied his career-best finish of third at the Magic Mile. While Harvick hasn’t had Truex’s speed this year, his record at Loudon significantly better. Harvick is the defending winner of this race. His other win on the one-mile flat oval came in the fall race of 2006. And in his last six starts at NHMS, Harvick has five top-five finishes and has led 379 laps. In the remaining nine events, Harvick has won at every track except for Texas where he’s scored top-10 finishes in his last six starts. If he cruises to the third round, he should be a lock with six wins in his last 10 starts at Phoenix.

Nick: Truex will certainly be a threat, but NHMS may bring the field closer together and allow Kevin Harvick to bridge the gap to the Toyotas. The same goes for Kyle Larson. I'd count on those three drivers being the favorites this weekend.

Tim: While I’ve been on record that Jimmie Johnson will be tough to beat as he always seems to step it up during the playoffs, it’s hard to deny that Truex has been the driver to beat week in and week out. Kevin Harvick also seems to have stepped it up a notch last week too and I fully expect both drivers to be in contention this Sunday.

The 12 drivers have been determined for the 2017 NASCAR Xfinity Series playoffs. Who do you think will be the final four in Homestead-Miami Speedway and who do you predict will win it all in November?

Jim:I'm going with William Byron, Elliott Sadler, Justin Allgaier and rookie Cole Custer in the Championship 4 at Homestead. I think Sadler wins that elusive first NASCAR championship (and no, he's not going retire after he wins it).

Lee: I think it’s Elliott Sadler’s year. He already won the regular season title and carries that momentum into the playoffs. But he’ll have to get past his own JR Motorsports teammates Justin Allgaier and William Byron to accomplish the task. The fourth driver is a crapshoot. While Toyota outspends Chevy and Ford, I don't see Matt Tifft running the table to Homestead. Although Daniel Hemric and Cole Custer are rookies, both have had solid runs and finished top 10 during the truck playoffs last season. That experience will pay off in the NXS title hunt. I think Custer has the advantage only because the Richard Childress Racing Chevys have been short on speed.

Nick: William Byron, Elliott Sadler, Justin Allgaier and Daniel Hemric are my final four. Among them, I think it will come down to Byron and Sadler for the title with the latter finally prevailing and capturing that elusive championship.

Tim: I think we’ll see William Byron avenge his frustration from last year in the truck series to win his first NASCAR championship. I feel his toughest competition will be his teammate Elliott Sadler. If Byron slips at all, I think Sadler will be there to claim the title. I also think Daniel Hemric and Justin Allgaier will be the other two at Homestead-Miami Speedway in the final four.

The eight drivers have been determined for the 2017 NASCAR Camping World Truck Series playoffs. Who do you think will be the final four in Homestead-Miami Speedway and who do you predict will win it all in November?

Jim: While I believe Christopher Bell is the favorite, I view the Truck championship battle as a little more wide open. I'm going with Bell, reigning champion Johnny Sauter, John Hunter Nemechek and Chase Briscoe racing for the title with Bell coming out on top for his first NASCAR championship.

Lee: I like the top four contenders — Christopher Bell, Johnny Sauter, Matt Crafton and John Hunter Nemechek. Chase Briscoe is my dark horse, but I don’t know how he gets past Bell, Crafton and Sauter — all who have stout factory support — especially since he hasn’t raced at five of the seven remaining tracks in a truck.

Nick: Christopher Bell, Johnny Sauter, Matt Crafton and Chase Briscoe. As for who will win it all, I think Bell will come out on top. He has been driving extremely well this season and certainly has the equipment under him to get the job done.

Tim: While it appears Christopher Bell is the driver to beat in the playoffs, I think Johnny Sauter has a chip on his shoulders and he’ll make it tough to beat him in the playoffs. I also think we’ll see Matt Crafton in the mix as well. The fourth driver I expect to see in the Championship Four is Chase Briscoe.

Matt Kenseth, Kurt Busch and Danica Patrick don't have set plans for 2018 yet.. Of the three, do you expect any on the sidelines next season?

Jim:It's quite possible both will be on the sidelines but I still think things will shake out that allow Kenseth to have a ride next season. For any drivers without full-time rides now there are not many viable options remaining unless the landscape changes drastically. The biggest unknown at the moment is Kurt Busch's future at Stewart-Haas Racing and the status of the No. 41 if Monster Energy elects not to return as a car sponsor next season.

Lee: Kenseth’s name has been mentioned as a possibility at Richard Childress Racing to replace Paul Menard in the No. 27 if sponsorship can be secured. His name has also come up for one of the Stewart-Haas Racing rides. As for Patrick, I don’t know where she could race and be competitive given that she was mediocre in top of the line equipment at Stewart-Haas Racing. Since champions such as Kenseth and Kurt Busch are struggling to secure solid gigs, I would imagine her options are slim.

Nick: I will be surprised if Danica Patrick remains in 2018, at least full-time, and I will be equally surprised if Matt Kenseth is rideless. His options are few, but they do exist. A lot of this rest on what happens with the No. 41 car.

Tim: I feel Danica Patrick will be the one on the outside looking in next year. Matt Kenseth has been mentioned as a possibility with several teams, but I think it all depends on sponsorship opportunities.

What driver currently with an underfunded Cup team would you put in a top-tier Cup ride, if you were given the opportunity?

Jim: Several good candidates in my opinion, but I would like to see David Ragan have another shot at a full-time season in a top-tier Cup car. I think he was overwhelmed and somewhat unprepared when he was moved up to the Cup series at Roush Fenway Racing while also competing full-time in Xfinity. We got an inkling of what he could do while filling in short-term for Kyle Busch at Joe Gibbs Racing two years ago. My second choice would probably be Landon Cassill.

Lee: If you had asked about the Truck series, John Hunter Nemechek would get my nod. I would love to see what he could accomplish in top-tier equipment since he’s delivered on a shoestring budget. On the Cup side, Chris Buescher. I think he has the discipline and talent to evolve into a weekly contender. Buescher is currently 26th in the standings. Every driver ahead of him — except for Michael McDowell — has had an opportunity to drive with one of the powerhouse teams. Would like to see what Buescher is capable of accomplishing.

Nick: I agree with Lee in that Chris Buescher would be my first choice, but for the sake of the discussion, my second pick would be Landon Cassill. He is consistent and reliable behind the wheel of the No. 34 car at FRM and outside the car, he is great with fan interaction, whether that be at the track or on social media.

Tim: I would like to see former NASCAR Next driver Corey LaJoie get an opportunity in a top tier ride. He’s’ won in everything he’s driven from stock cars to modifieds and has the ability if given the chance. I also think Matt DiBenedetto has done an admirable job with BK Racing several years ago and most recently with GoFas Racing.