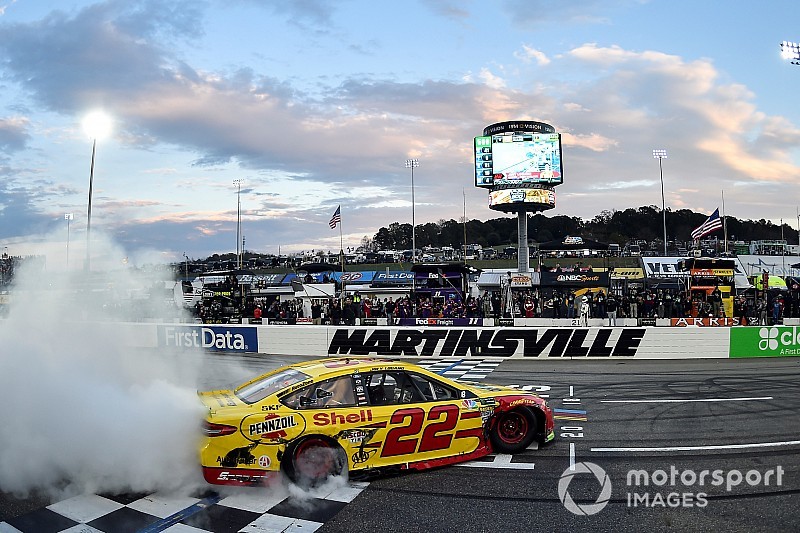 The NASCAR team examines and discusses the wild finish between Martin Truex Jr., and Joey Logano from Martinsville and other topics.

It seems everyone has an opinion of the finish from Martinsville Speedway in the NASCAR Cup Series race on Sunday. What are your thoughts?

Jim Utter: I thought it was phenomenal racing at the end of what was up to then a so-so race. I have absolutely no problem with how the race played out, especially considering it was a short track, where we have all seen actions 100 times worse. Whatever the "proper" method of utilizing the bump-and-run is, it certainly ensures not wrecking out your competitor and nothing like that happened after Joey Logano's contact with Martin Truex Jr. I don't blame Truex for being upset - he has lost what would have been two playoff victories on the last lap - but trying to categorizing what took place as something other than good short track racing is a big stretch.

Nick DeGroot: Fantastic racing and a phenomenal finish. If I'm Joey Logano, I'm putting the bumper to Martin Truex Jr. and if I'm Truex, I'm going to be fuming about it. Truex raced him clean but didn't get raced clean back and that's why he was upset. But Truex should have looked at the situation, realized what was on the line and considered that the guy he was battling wasn't going to stick to your code of racing ethics when it comes down to it. Logano did what he needed to do and Truex erred and thinking that Joey wouldn't go for it. But now Logano must be ready because if those two end up going head-to-head for the title, there is now nothing holding Truex back from returning the favor. There doesn't have to be a right and wrong here, just two guys going for it with differing opinions of where the line is when so much is at stake.

Tim Southers: I didn’t think the race itself was all that great but the finish lived up to be another memorable Martinsville finish. I understand the emotions on all sides, but growing up as a short track fan the move at the end of the race was nothing out of the ordinary for me to witness on a short track. When you add the factor of racing for a final four playoff berth, I think 95% of the other drivers would have done the same thing to win the race and I would also expect the driver being bumped to be as upset as Martin Truex Jr., was too.

Do you think Joey Logano has to be concerned of a "Matt Kenseth-type" retaliation from Martin Truex Jr. over the next three races?

Jim Utter: No. First of all, Truex is not going to risk getting suspended for one or more races especially when he still has a chance to win the championship. And along with that, what good is retaliation against Logano at Texas or Phoenix? He still gets to compete for the championship at Homestead. And if Truex makes it to the Championship 4, are we really to believe he will risk his own title chances to deny Logano's? Not likely.

Nick DeGroot: We already saw an aggressive move for a race win by Logano cost him a title once (2015 with Kenseth). Although I don't see Truex retaliating in that fashion, he certainly won't race him clean if the No. 22 is all that stands between him and back-to-back championships. Theres no question about that.

Tim Southers: If this wasn’t in the final three races of the year and Truex’s impending move in 2019 to a new team I would say a definite - yes. But at the same time, I think if Truex is not in the final four at Homestead-Miami Speedway, if I were Joey Logano, I would want to stay clear of him if I could at all times.

For younger NASCAR fans, they weren't around when Dale Earnhardt Sr. was alive and racing. In all probability, if that would have been Earnhardt instead of Logano, he would have just laughed at everyone and thought nothing of laying the bumper to the car in front of him. Would you agree or disagree with that thought and why?

Jim Utter: Fans still like that now, they just don't like when it's their favorite driver who gets bumped out of the way or it's a driver they dislike who is doing the bumping. The end of Sunday's race was exactly what fans hope for when they go to a NASCAR short track, but half the people complained about even though they saw exactly what they wanted to see (just not their favorite driver coming out on top).

Nick DeGroot: There's no difference. Like I said, I have no problem with what Logano did as long as he understands that if it comes back around on him, he can't take issue with it. That was just two different styles clashing on that final lap.

Tim Southers: I think that type of racing is what made NASCAR so popular in the first place and I think most fans were excited and happy about the finish of the race and how hard they both went for the win. I think everyone was happy except for maybe the Truex Jr. fans of course for obvious reasons.

Stewart-Haas Racing has been the dominant team all season long but after Martinsville, three of the four drivers are outside the final transfer position. How surprised are you that there could only be one driver make it into the final four at Homestead-Miami Speedway?

Jim Utter: It's not that surprising considering for most of the season, Kevin Harvick was far and away the most dominant of the group. And right now, it looks like he is the most likely going to be the lone SHR representative in the Championship 4. I still think there is a chance for another SHR driver to join him, with the most likely opportunity coming this weekend at Texas, where all of the SHR drivers should run well.

Nick DeGroot: It's interesting how the discussion flipped from all of them advancing to the potential of all of them getting eliminated. I still believe Harvick will be fine, especially with Phoenix ahead, but I'm not that surprised. Kurt Busch, Bowyer and Almirola have all shown flashes of greatness this year, but none of them have been consistent enough for me to think of them as final four material.

Tim Southers: I honestly thought for most of the season that at least one of the three would have a good chance to join Kevin Harvick in the final four and I still think it could happen, however, I didn’t think we would see a driver like Chase Elliott get hot at the right time. The good thing for the SHR team is Texas Motor Speedway is on the schedule and all four SHR cars have shown speed all year long at intermediate tracks.