NASCAR Roundtable: Will Truex win a third in a row at Chicagoland? 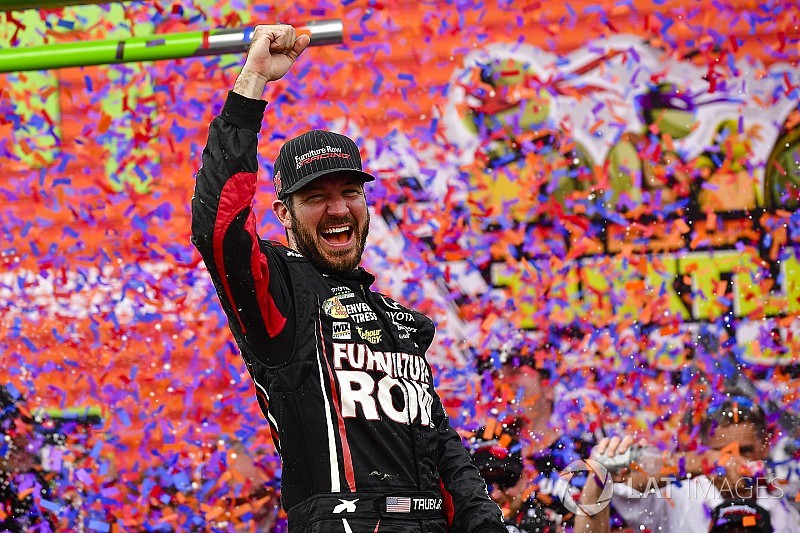 Welcome to the latest edition of the NASCAR Roundtable.

Martin Truex Jr. has won the previous two races at Chicagoland and enters this weekend's race fresh off of his win in Sonoma. How likely do you think it is he can score a third win in a row at Chicagoland?

Jim: Well, it's not hard to say Truex, Kevin Harvick and Kyle Busch - who have combined to win 12 of the season's first 16 races - won't all be in the mix this weekend for the win. The complete teamwork evident in Truex's win at Sonoma shows that team is still on top of its game and having won the last two Cup races at Chicagoland, he's certainly in position to pick up a third consecutive victory.

Kenny: The Sonoma win will give Truex and his team a shot of momentum, but they’ll need more than that. Kevin Harvick and Kyle Busch have been a tick better on the 1.5-mile layouts this year – Truex won on the big tracks (Auto Club and Pocono) before scoring on a road course Sunday. He’s got a shot, but he’ll have to get past the other two to pull it off.

Nick: I want to say yes, but Kevin Harvick and SHR have just been so strong this year at intermediate tracks that I can't bet against them. Kyle Busch is another obvious choice, but I would have to go with Harvick for the win in Chicago.

Tim: I think he could do it, yes, but he’ll have to top Kevin Harvick and Kyle Busch to get it done this weekend. Harvick won the first two races held at the track. Truex clearly has momentum after his win at Sonoma, but it wasn’t like Harvick and Busch have fallen off the pace as they both finished in the top five at Sonoma.

Jim: At this rate, I think we have clearly seen the Cup series' top teams rise to the top and it would be a big surprise to me if there suddenly developed a fourth or fifth team that would pick up multiple victories. I think we fall far short of last year's total and I don't expect more than 10 different winners this season and we may be lucky to get to that number.

Kenny: I think we fall short, well short in fact, of 15 winners. With 20 races remaining, there would need to be a different winner every two races or so from here on out to reach that mark. With the way Kevin Harvick, Kyle Busch and Martin Truex have dominated races this year, I don’t see that happening. Ten or 11 different winners for the season would probably be more realistic.

Nick: We will not. Kevin Harvick, Kyle Busch and Martin Truex Jr. have such a stranglehold at the front of the field, drivers such as Kyle Larson and Jimmie Johnson winning would be an upset in some regard. By season's end, we'll reach ten, but not 15.

Tim: I think we’ll be lucky to see 10 different winners this season with the dominating performances of three drivers who’ve combined to win 12 of the first 16 points races of the year. Kevin Harvick has five, Kyle Busch is at four and then Truex with three wins. While I feel we’ll still see a couple of different winners throughout the season, we won’t even get close to last year’s total.

What has been the biggest surprise to you in the Xfinity Series this season?

Jim: I think the biggest surprise for me is that the three drivers atop the series standings  - Elliott Sadler, Cole Custer and Daniel Hemric - have yet to win a race this season. The most surprising of the three I would say is Sadler, who has been a consistent performer and presence atop the series standings the last couple of years but has come up short in the wins column.

Kenny: How well Daniel Hemric and the No. 21 team have performed out of Richard Childress Racing. Hemric is a talented driver but I didn’t expect that team to be third in points at this juncture. Particularly when RCR’s Cup teams aren’t running in the top 10 and contending for wins on a regular basis. An XFINITY program is often a reflection of a group’s Cup effort – Joe Gibbs Racing is a prime example – but Hemric’s results seem to come in spite of RCR’s current Cup struggles.

Nick: Sadler not yet winning is definitely a surprise, but Kaz Grala's performance with the all new Fury Race Cars team has been very impressive to me -- two top tens in four races with no result worse than 16th. I am excited to see more out of them in their upcoming races.

Tim: I would agree with my colleagues on one driver - Daniel Hemric. He’s ran well enough at times that he could already have a couple of wins but has yet to visit Victory Lane. I feel he’ll score a win before the end of the season, but I thought he would have at least one win by now.

Justin Haley became newest first-time winner in the NASCAR Camping World Truck Series this season last weekend. Do you think we could see another one Friday at Chicagoland?

Jim: I certainly think another first time winner is possible and if there is one, I'd have to go with Stewart Friesen. He's done everything but win this season, racing consistently up front, leading laps and has only started outside the Top 10 in one race so far this year. He is shown is capable of winning and I think it's just a matter of time.

Kenny: I think with the series heading back to a 1.5-mile track, the odds of seeing another first-time winner aren’t great. But there are a couple of folks who have run consistently well this year and could step up. Stewart Friesen doesn’t have a ton of asphalt experience but he’s finished sixth or better in all five races this year on intermediate tracks, including a runner-up at Texas. And Todd Gilliland continues to impress in the Kyle Busch Motorsports No. 4 Toyota entry.

Nick: It's only a matter of time before Stewart Friesen finds his way to Victory Lane, but Johnny Sauter has been so strong this year, especially on the intermediate tracks. But he almost beat the veteran at Texas, so I can no reason why he can't take the fight to him at Chicagoland.

Tim: I think Stewart Friesen will be the next driver to score a win in the CWTS and as well as he’s been competing, a win is just right around the corner. Additionally, he’s ran well well on 1.5-mile tracks despite not having much experience on them prior to this season.