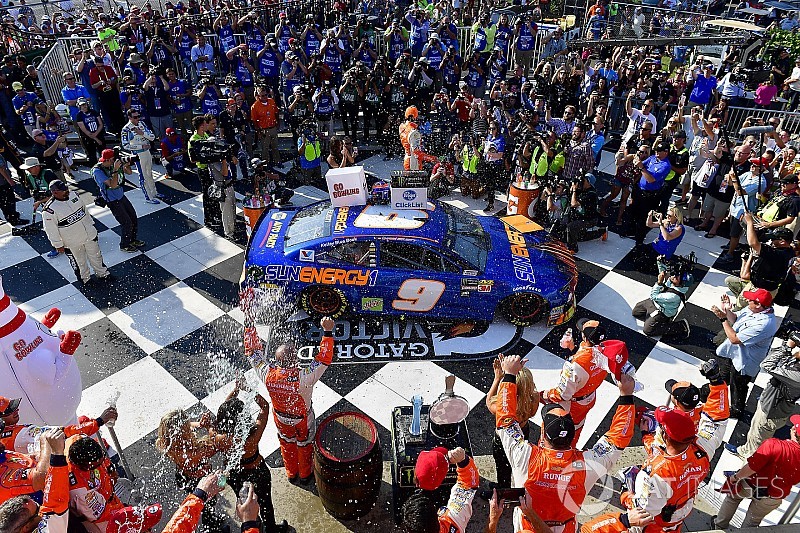 Our NASCAR team examines Chase Elliott's first Cup win and who might be the next to reach Victory Lane.

How big was Chase Elliott's maiden Cup win at Watkins Glen for NASCAR?

Jim Utter: It could not have come at a better time, nor in a better fashion. It seems all season fans and even media have greatly anticipated the rise of young talent in the Cup series only to see three veteran, experienced drivers dominate the competition for most of the year. The exciting thing about Elliott's win was that it came with him doing one-on-one battle with two of those veterans - Kyle Busch and Martin Truex Jr. Elliott's win was a shot in the arm for Hendrick Motorsports but also for NASCAR itself. As much as some like to say NASCAR has lost its older fans, fans today to gravitate to the storylines that connect the sport to its past.

Kenny Bruce: On a scale of 1-10, at least a 9. For starters, Elliott is one of the “young” guns NASCAR is hoping will contend for wins on a regular basis and build a name/reputation for themselves. Secondly, there’s the link to his father, Bill, the 1988 series champion and a NASCAR Hall of Fame member. Awesome Bill from Dawsonville … nearly everyone remembers that.

Nick DeGroot: With Dale Earnhardt Jr. retired, he will more than likely take up the mantle as the sport's Most Popular Driver, so it is huge for him to finally breakthrough and get that first win. The reaction from the crowd said it all. Despite the Brian France news casting a cloud over things, Elliott's win has energized the fan base and injecting some much-needed excitement into the 2018 season.

Tim Southers: This was huge and couldn’t have come at a better time for Elliott, Hendrick Motorsports and NASCAR. The 22 year-old driver earned his first win racing two former Cup Series champions hard every lap and this win I feel will be the first of many for one of NASCAR’s biggest young stars. Yes, his dad is Bill Elliott, but judging by the response of the fans on Sunday, he’s already got plenty of his own admirers.

Now that Chase Elliott has his first Cup Series win out of the way, who do you think will be the next 'Young Gun' to score a win in NASCAR's top series? Among the drivers looking for their first Cup win include: Darrell Wallace Jr., William Byron, Alex Bowman, Daniel Suarez, Ty Dillon.

Jim: Should Hendrick Motorsports continue its improvement, another driver from that organization could very well end up in Victory Lane. But I think Daniel Suarez is currently in the best position to find his way to Victory Lane. He has had some very solid results lately and I believe getting much better at being able to describe to his crew chief what he needs from the car in order to get the most out of it. I would not be shocked to see him win before the end of the season.

Kenny: I would not be surprised to see Suarez be the next driver to pick up that first career win. He has shown steady improvement on the track and I think the team is getting more comfortable with its driver. Bowman is also beginning to generate a little attention.

Nick: Daniel Suarez currently leads that list. He has the pace, the talent and the momentum after back-to-back top-five finishes. But should Hendrick see an up-tick performance after Elliott's triumph, both Bowman and Byron will become real threats.

Tim: I agree with my colleagues that I think Daniel Suarez will make history by becoming the first Mexican-born driver in the history of the NASCAR Cup Series to win a race. It could also come as early a this weekend in Michigan. He won his first NASCAR Xfinity Series race there several years ago.

Clearly, Hendrick Motorsports has improved its performance of late. Is there enough time left in the season for Chase Elliott or another HMS driver to be a serious contender for the series championship?

Jim: Chase Elliott is making all the right moves right now. He's winning stages and collecting playoff points. If he is going to have a shot and getting through the first nine races of the playoffs and earning a shot at the Championship 4 at Homestead, he's going to need to collect a lot more. Kevin Harvick, Martin Truex Jr. and Kyle Busch have a tremendous head start in that area over the rest of the field.

Kenny: I think Elliott can make a legitimate run at the championship. His team seems to be peaking at the right time. The pressure of a playoff is still relatively new though so Elliott will need a little luck to advance multiple rounds. I don’t think the other Hendrick teams have been consistent enough to be considered playoff contenders.

Nick: Elliott has led the Hendrick team since the start of the season and they are peaking just before the playoffs, so they are absolutely a contender, but let's be realistic here: No one else is in the same class as Kevin Harvick, Kyle Busch and Martin Truex Jr. But still, I could see him ending the year in the top half dozen.

Tim: I think Elliott has improved this season - especially recently - and should easily make it into the second round of the playoffs. To advance any further I think he and his team will have to step up their game to contend with the likes of the ‘Big 3” and several other Ford drivers. It can be done however, and I would not be surprised to see him as part of the final four in Homestead.

There are just two races remaining before the playoffs begin in the NASCAR Camping World Truck Series. Who do you think is feeling the most pressure to get a win at Michigan or Bristol?

Jim: If they want to be ensured of a spot in the playoffs, then Stewart Friesen and Matt Crafton need to cement their invitation by winning one of the next two races. There are already five drivers locked in through wins. At this point, I'm not sure I would want to assume points alone could advance them to the playoffs. And if someone unexpected wins outside the current eight leaders in the playoff standings, then the situation will get very interesting going into the regular season finale at Bristol.

Kenny: Probably Cody Coughlin or Dalton Sargeant, two guys sitting outside the playoff cutoff. Both have had up-and-down seasons thus far – looking like potential contenders one week but struggling the next. Among those inside the top eight and unofficially playoff bound – Stewart Friesen probably feels as if he needs a win to prove he and his team are legitimate title threats. Second, third and fourth in his last three starts.

Nick: Stewart Firesen is in need of a win for the same reason Elliott was in Cup. He has been knocking on that door and once he breaks through, I'd consider him a title threat. He has shown speed on a multitude of circuits including the intermediates, which is critical in the playoffs. As for the bubble watch, Cody Coughlin and Dalton Sargeant both need to be counting points and ready to jump at the opportunity to win, considering their precarious position.

Tim: I think one of the strongest trucks this season that has yet to visit Victory Lane is the Chevrolet driven by Stewart Friesen. Friesen has been fast at numerous tracks this season but has yet to close the deal by scoring his first NASCAR national series win. I think he has the best chance and is feeling pressure to secure a spot. Former champion Matt Crafton is probably feeling the most pressure trying to make sure he makes the playoffs and it would be a huge upset if he fails to make the playoffs this season.