Ryan Blaney: Penske "on the brink" of matching SHR 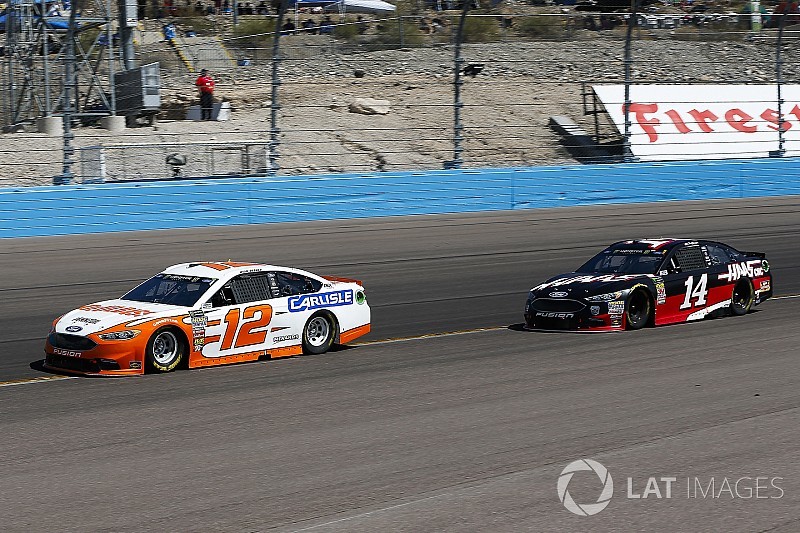 Ryan Blaney says his Penske team are “on the brink” of being able to match Ford pacesetters Stewart-Haas Racing in the 2018 NASCAR Cup series.

Joey Logano took Penske’s only win of 2018 at Talladega last month, while SHR has managed five wins through Kevin Harvick and Clint Bowyer as Ford has continued to hold the edge over the newer Toyota and Chevrolet.

But Logano’s consistency means he holds an 18 point gap over Harvick for second in the standings, with both trailing leader and Toyota driver Kyle Busch.

Blaney has yet to win in 2018, coming closest at the season-opening Daytona 500 where he led the most laps and fell to seventh. He has since had five top 10s from the following 10 races but says his team is now close to matching SHR's race-winning form.

When asked how Penske could match SHR, Blaney told Autosport/Motorsport.com: “I think we’re on the brink of being where we need to be.

“Ford’s had a lot of success this year and we just need that little bit more to break through and be at that level.

“Just keep finding new things, keep working hard and Penske does a great job on that, just improving on every little thing, from the body to mechanical grip, to eking out races.

“That spot’s coming along.”

Mustang can learn from Fusion

Ford will retire the Fusion in favour of the Mustang in 2019, having used the Fusion since the Gen-6 regulations began in ’13.

The Blue Oval has waited until Toyota introduced its new Camry in 2017 and Chevrolet replaced its Camaro the following year.

Neither manufacturer replaced their car with a completely different production model though, but Blaney says Ford can still learn from the Fusion in the development of its Mustang.

“It’s always nice when they introduce a new model to the series,” he said. “I think with the Mustang coming in, it’ll not only look great but help performance.

“I’ve seen renderings of it. I really like the way it looks and it’ll be great when they do the official unveil.

“When you build a new car, you can take the goods and the places you struggle into the new car and improve it.

“Those two comparisons will play into their favour and I think any manufacturer does that with the previous car when they go into new one.”

Blaney added that he was looking forward to seeing the Mustang pitted against the Camaro, considering their 50-year production car rivalry.

“Those cars have been pitted against each other for generations,” he said. "It’s at [the] highest level of stock car racing and I think it’ll be a very cool battle.”

The Mustang will shortly go before NASCAR for approval as it works towards its 2019 debut.

Could Chris Buescher be Chevrolet's best hope at Kansas?