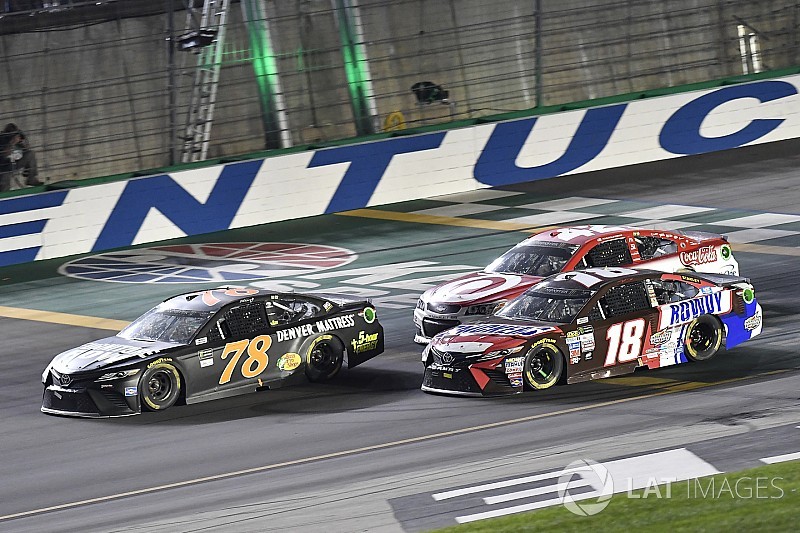 In 2017, NASCAR’s satellite teams are proving that the customer is always right.

For the third time this season, Martin Truex Jr. has spanked the field — including his Toyota teammates at Joe Gibbs Racing — with his latest success coming at Kentucky Speedway in Saturday night’s Quaker State 400.

Kyle Larson currently leads the standings after two wins and his sixth second-place finish in the first 18 races — with engines, transmissions and gears Chip Ganassi acquires through Hendrick Motorsports.

While racers from NASCAR’s super teams continue to provide competition for Truex and Larson, the drivers of the Nos. 78 and 42 have been battling for the top spot in the Monster Energy Cup Series standings and beating their well-heeled counterparts on a weekly basis.

All three of Toyota’s wins have come from Furniture Row Racing. Halfway through the 2017 season, JGR is winless. At the same point last year, Gibbs had earned seven wins with each of its four drivers visiting Victory Lane at least once. Kyle Busch, Denny Hamlin and Matt Kenseth would currently qualify for the playoffs on points, but they’re growing weary of running behind their affiliate team.

Seven-time champion Jimmie Johnson has carried the Hendrick Motorsports banner with three wins this year — but he’s the only victor among his three teammates. Only Chase Elliott, who finished third on Saturday night, is in the Playoff Zone.

“It's about people, really,” Garone said. “We have just a really good group of guys, and I mean, all the teams do, but sometimes you get a group that gels really well and just worked really good together, and in particular on the 78 team.

“The guys have been together for quite a while now, and with Cole’s (crew chief Pearn) leadership and a few more of the guys at the shop, it just really works well out there, and we have a real isolated total focus on our program, and I think you see those kinds of results on the racetrack.”

The boutique team — that expanded to two squads with the addition JGR protege Erik Jones coming on board — receives all of its essentials from Gibbs. But Truex’s dominance, which includes 13 stage wins, the No. 78 has 28 playoff points once the playoffs begin.

While all the Toyota teams fall under the Toyota Racing Development banner, other technical alliances have not remained as cordial. The flow of information slowed when Gibbs started beating the Hendrick cars when the team was still part of the General Motors family.