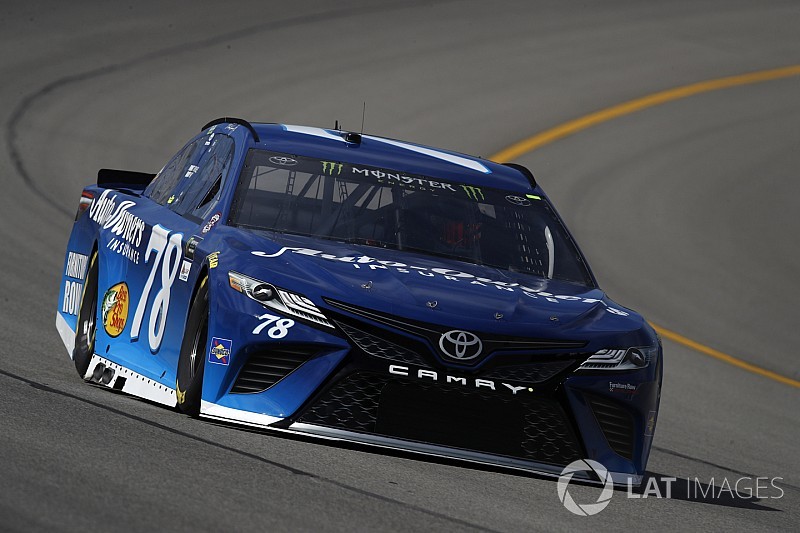 Martin Truex Jr. won his ninth stage of the season on Sunday at Michigan International Speedway.

A four-tire stop during the competition caution enabled the No. 78 to pass polesitter Kyle Larson on Lap 35 and lead the final 26 of 60 laps. Truex had a 3.2-second lead over Larson as the first segment ended.

“Our Toyota has been pretty sporty so far, we’ll just keep after it…hopefully, keep this thing up front all day,” Truex said. “Playoff points are going  to be huge, hopefully keep racking them up and get us another trophy at the end of the day.”

Larson led the field to green for the FireKeepers Casino 400.

Seven drivers started from the rear of the field. Landon Cassill, AJ Allmendinger and Jimmie Johnson with back-up cars, Kevin Harvick, Kurt Busch and Ty Dillon for unapproved body modifications and Daniel Suarez for changing a tire after qualifying.

All of the drivers that started from the rear — along with Austin Dillon, Michael McDowell, Paul Menard and Reed Sorenson — pitted during the caution. Larson held the point on the restart as Bowyer passed Kyle Busch and Truex to move up to second.

With 10 laps remaining before the competition caution, Larson extended his lead over Bowyer by 1.5-seconds.

When the competition caution was called on Lap 26, Larson had led all the laps and held a 1.489-second lead over Bowyer. Truex, Hamlin, Kyle Busch, Elliott, Blaney, Logano, Kenseth and Keselowski rounded out the top 10. Jones, Earnhardt, Kasey Kahne, Ricky Stenhouse Jr., and Kurt Busch ran 11th through 15th as the cars came into pit.

Larson made a two-tire start and retained the lead when the race returned to green on Lap 29. Halfway in the first stage, Larson led followed by Truex, Blaney, Hamlin, Kenseth, Bowyer, Kyle Busch, Jones and Logano. On Lap 35, Truex, who had four tires, drove to the inside of Larson for the lead. Busch was third followed by Blaney, Hamlin, Bowyer, Kenseth, Jones, Logano and Elliott.

Coming to Lap 40, Truex’s lead over Larson was 1.487-second. Hamlin passed Blaney for fourth and Jones complained of a loose wheel. He pit on Lap 41 after running in the top 10 and dropped to 37th.

After completed his 47th lap, Truex extended his advantage to 3.1-seconds over Larson. Busch, Hamlin and Bowyer completed the top five. Kenseth, Blaney, Logano, Elliott and Johnson rounded out the top 10.

With five laps to decide the stage, Truex moved out to a four-second lead over Larson. Kyle Busch, Hamlin and Kenseth rounded out the top-five.

Twenty-eight cars remained on the lead lap at the end of Stage 1. Matt DiBenedetto, running 29th, was the free pass.

Joey Logano hoping to turn his luck around at Michigan