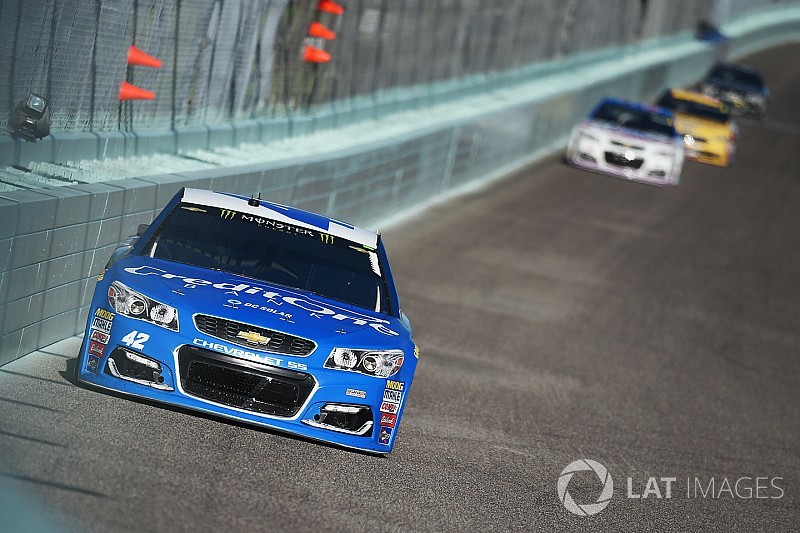 Kyle Larson made a clean sweep of the first two stages at Homestead-Miami Speedway on Sunday.

Larson led 144 laps en route to his eight stage win of 2017. He beat Martin Truex Jr. to the line by .639-seconds in a 10-lap shootout after Danica Patrick triggered the third caution of the EcoBoost400.

Larson had the outside line when the race returned to green on Lap 87. Harvick moved around Kyle Busch for second followed by Truex, Kurt Busch, Logano, Elliott, Hamlin and Kenseth. The Fords of Keselowski and Harvick battled for second in Turn 4 coming to Lap 90 but the No. 2 held the position—temporarily. Harvick completed the pass for second on Lap 93. Kyle Busch went low through Turns 3 and 4 on Keselowski on the next lap.

As Larson continued to ride the rim on Lap 96, Harvick closed to within .214-seconds on Larson—the first driver to challenge the No. 42 Chevy all day. Busch dropped to the inside of Keselowski in Turn 3 and completed the pass before the line on Lap 99.

On Lap 104, Truex caught Keselowski on the backstretch out of Turn 2 and completed the pass for fourth. By Lap 110, Larson’s lead was 3.7-seconds over Harvick and growing. Busch caught Harvick on Lap 113 on the backstretch and completed the pass for second between Turns 3 and 4. While the Playoff contenders battled, Larson moved out to a four-second lead.

Keselowski was the first Playoff driver to pit on Lap 120. Harvick came on the next lap. Larson pitted on Lap 122 and turned over the lead to Kyle Busch, who awkwardly dove onto pit road along with Truex on the next lap.

Kyle Busch caught Harvick at the line on Lap 131 and passed the No. 4 Ford coming out of Turn 2. Keselowski continued to run fourth followed by Truex, Kenseth, Logano, Kurt Busch, Hamlin and Elliott. Larson held a three-second lead over Kyle Busch with 20 laps to go in the stage. Harvick, Truex and Keselowski completed the top 10.

Danica Patrick was running 18th when she lost control of her car and hit the wall in Turn 2. Kasey Kahne could not stop in time and ran into the back of the No. 10 Ford on Lap 141.

“I hit the wall in three and four and got some fender rub on the tire and it blew the tire," Patrick said. "I went a couple of laps and there was smoke in the car, but they thought it was all right, but it wasn’t.”