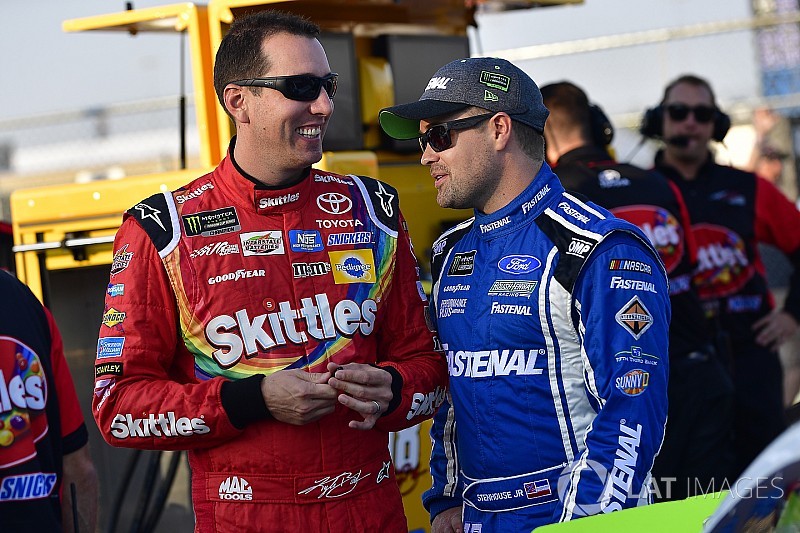 Ricky Stenhouse Jr., who was was criticized after being involved in multiple incidents at Daytona, admitted that he was too aggressive at times during the race.

That appeared to be the end of it, but Kyle Busch, who's race ended after contact with Stenhouse while battling for the lead during the second stage, had more to say Friday at Kentucky Speedway.

When asked in the Media Center if Stenhouse reached out to him and apologized, Busch replied, “He did not reach out ... I am disappointed that he did not.

“He wiped out half the field. Pretty sure there would be a pretty busy Monday for him, but there wasn’t, so apparently he just doesn’t care.”

When questioned if that would change the way he would race Stenhouse in the future, Busch quipped, “I can’t – I can’t worry about people that far back in the field.”

He later gave a more a extensive reply, better expressing his feelings about the situation. “If you don’t care, don’t reach out, you know? If you did it purposefully, don’t reach out, you know? But if you actually have some remorse and you’re apologetic or you need to be, then I tend to reach out, you know, when I make mistakes or when I do things I feel like hinder other drivers then I always reach out and just say something like, ‘Hey, man. Man, I hated I go into you. I’m sorry,’ you know? Whatever. It’s not going to change the fact, but at least you, you know, take that step, so that’s just my mindset. Other drivers have different mindsets.”

Busch finished 33rd at Daytona and was among 20 driver that failed to finish due to accidents, while Stenhouse went on to place 17th in his wounded Ford Fusion.

Stenhouse must have heard Busch's comments because he decided to visit him ahead of the final round of qualifying Friday. The two shared a brief conversation on the pit lane while Busch sat in his race car. Stenhouse then explained to NBCSN what was discussed in the exchange, and it appears he is not backing down.

"Not really a change of heart. I just told him why I didn't reach out. I felt like he ran his mouth enough on his radio and then after the race that I didn't really have anything to say to him. Honestly feel like I normally do reach out to people when I make mistakes and I clearly made a mistake, but with him running his mouth, I just felt like I don't really need to call him, so I just let him know that."

And then, a warning. "I told him you're right, you do run a lot further up front, but pick and choose your battles wisely because you will have to deal with me sometime whether you're lapping me or we get our cars better and we're up there racing with you.

"I told him if he wanted to keep running his mouth, he can come over and do it around me and I'll stop it for him, for myself."

When asked if this feud is over despite the pointed comments, Stenhouse simply reiterated, "Yeah, I'm fine, but if he wants to keep running his mouth, he can come over and do it to me."

Busch will start fifth in Saturday's Cup race at Kentucky Speedway while Stenhouse will roll off 14th.