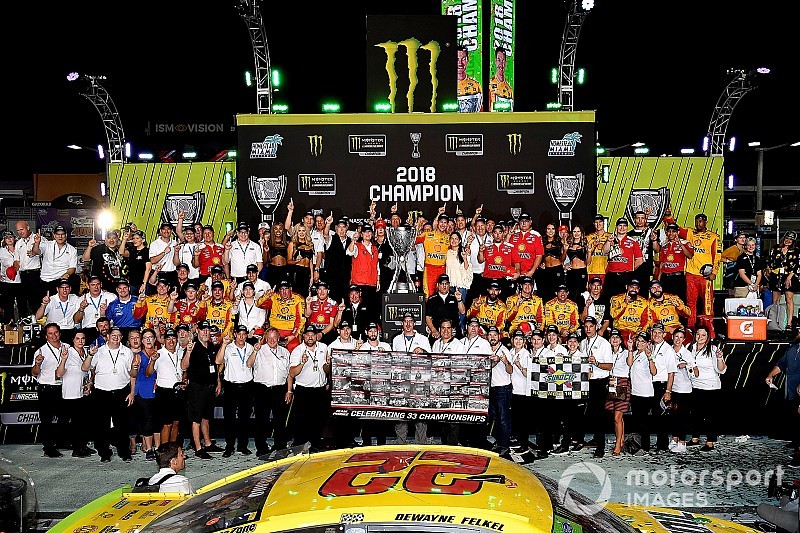 Spotter TJ Majors caps off his first year spotting for Joey Logano in the NASCAR Cup Series in style with a championship.

Although he had already spotted some for Logano when he drove in the NASCAR Truck Series for Brad Keselowski, this year was Majors’ first serving as Logano’s spotter fulltime in the Cup series and the duo ended their first season together celebrating their first series championship.

While much of the attention was given on the ‘Big 3’ (Kevin Harvick, Kyle Busch and Martin Truex Jr.) most of the season, Majors felt that since the race at Watkins Glen, N.Y., his team was one of the best and they peaked at the right time.

“After that race at Watkins Glen where we ran only one lap before crashing out I think we had the best average finish or one of the best for the remainder of the season,” said Majors. “I also think knowing we already had a win (to make the playoffs) allowed us to be a little more aggressive going after points and that helped us as well.”

“We ran well in the spring and won at Talladega, but I think the win by Joey at Martinsville was the shot in the arm the team needed,” said Majors. “We also ran well at Kansas and Texas (in the playoffs) so we knew we had good speed on 1.5-mile tracks.”

Majors spotted the past 10 years for Dale Earnhardt Jr. before moving over to Logano after Earnhardt retired at the end of the 2017 season.

The transition was smoother than Majors could have ever imagined.

“I’m so happy to be a small part of this championship team,” said Majors. “Joey and I really hit it off well from the first race of the year and I appreciate Joey bringing me in this season to help.

“They already had a great team in place before this season and it’s been great to be a part of this group. Joey likes a lot of information and he understands things once I tell him and it’s seamless how he uses the information I share with him right away.”

Battling for a championship may seem nerve-wracking but Majors felt the exact opposite.

“It’s funny really as I was more nervous the Monday after Martinsville than I was this past weekend,” Majors said. “I really wasn’t nervous at all and I just tried to look at it as just another race.

“I also think the confidence Joey had all weekend carried over to the entire team. His confidence he shared and talked about built us all up over the entire weekend.”

As for the key pass Logano made around Truex on the way to the win, Majors said while it might have looked like a big deal on TV and how the announcers were talking about it, he felt it was just part of the plan for the race.

“When Martin went to the bottom of the track, Joey was able to run the line he planned on running on other restarts and I knew if we could get to the outside that was the place to be,” said Majors.

Celebrating the championship was an unforgettable experience, Majors said.

“I really appreciate all the spotters coming by and congratulating me and our team,” said Majors. “I was also able to face-time with my wife and daughters in Victory Lane and that was special.

“It was kind of cool seeing the guys on the team that had been here before and not been able to celebrate a championship now happy and celebrating was special. I had over 200 text messages by the time I was able to check my phone Sunday night.