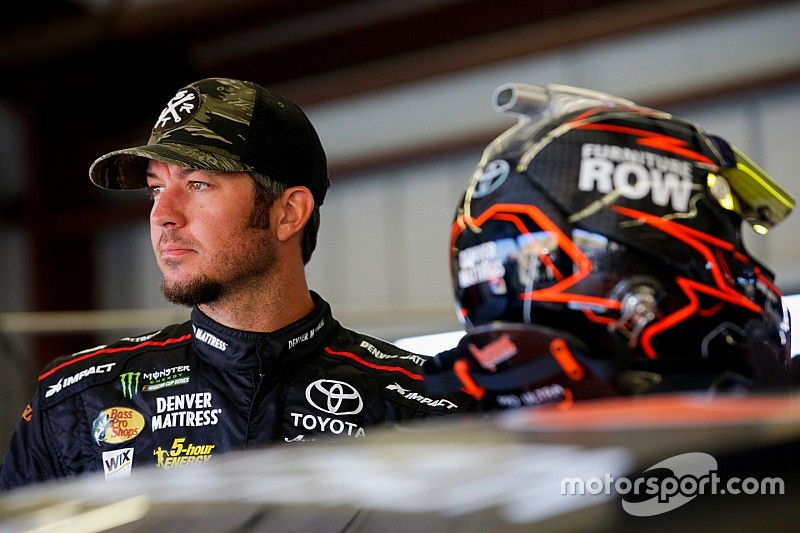 Busch passed Truex for the lead entering Turn 2 on the Lap 87 restart. Before completing the first lap, Keselowski slid up into the No. 48 of Jimmie Johnson and also collected Clint Bowyer in Turns 3 and 4 to ignite the third caution.

The race returned to green on Lap 93. Busch held the lead with Truex in pursuit. The field completed the first circuit. While entering Turn 1, Kasey Kahne stuck his nose under the No. 6 Ford of Trevor Bayne for 11th-place and sent the cars into the spin cycle.

A dozen cars came down pit road during the fourth caution. Kyle Busch remained on the track along with Truex, Harvick, Kenseth, McMurray, Elliott, Kurt Busch, Jones, Logano, Newman and Bowyer. Stenhouse, Earnhardt, Blaney, Suarez, Hamlin, Larson, Wallace, Allmendinger and Patrick rounded out the top 20 when the race returned to green on Lap 100.

The fifth caution was triggered by Bayne spinning off of Turn 4 on Lap 112. Busch held a 1.351-second lead over Truex. Kenseth, Harvick, Elliott, Jones, McMurray, Bowyer, Kurt Busch and Larson rounded out the top 10. Elliott, Logano and Earnhardt pitted during the caution.

Busch led the field to green on Lap 117. Harvick moved to the outside of Truex to take second-place at the line. Truex came back around for second in the first turn.

As the No. 18 car encountered traffic, Truex closed in and passed Busch for the lead on Lap 134. Harvick remained third followed by Jones, Larson, Bowyer, Hamlin, Kurt Busch and Jamie McMurray.

When the race returned to green on Lap 141, Truex was in the lead followed by Kyle Busch, Harvick, Kenseth, Jones, Larson, Bowyer, McMurray, Allmendinger and Earnhardt. McMurray and Larson made contact on the restart and the No. 42 dropped, reporting he was loose.

Kenseth passed Harvick and Earnhardt picked up three positions after the first lap.