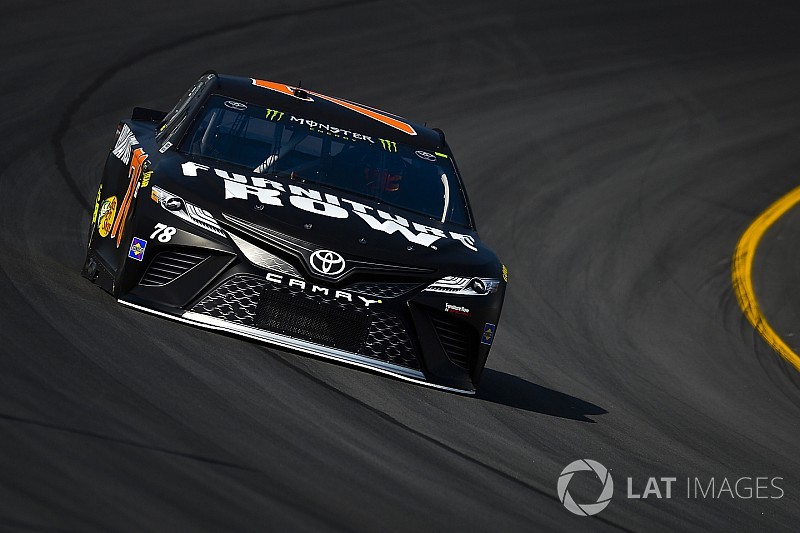 Martin Truex Jr. led the final 13 laps in the first segment of the 400-miler at Kentucky Speedway to earn his 12th stage win of 2017.

“I’m running my own race here,” Truex said. “The Furniture Row Toyota has been doing good.”

Kyle Busch led the field to green in the Quaker State 400. Jamie McMurray got a great jump at the start and went inside of Matt Kenseth for third.

In the first three laps, Kyle Larson, who failed to qualify on Friday, came from the rear of the field to 29th. NASCAR officials reported a tire rub on Ty Dillon’s car on Lap 7. He would pit on Lap 17 after dropping off the lead lap.

Johnson passed Blaney on Lap 13 for seventh. Logano and Elliott completed the top 10. Busch held a one-second lead over Truex and had lapped 10 cars. However, by Lap 25, Busch’[s advantage fell to 0.579-seconds on the No. 78.

Just before NASCAR called the competition caution, Truex passed Busch for the lead on Lap 29 but when the yellow flew, the No. 18 car retook the lead.

On the Lap 35 restart, McMurray followed Busch to second. Truex, Kenseth, Harvick, Johnson, Jones, Blaney, Suarez and Elliott completed the top 10. Hamlin came inside from 11th to ninth. By Lap 39, the first 10 cars were single file. Larson restarted 18th but with four tires quickly moved through the field.

Harvick passed McMurray on the final lap before the end of the stage to finish fourth. Kyle Busch’s 66 laps were the most led.