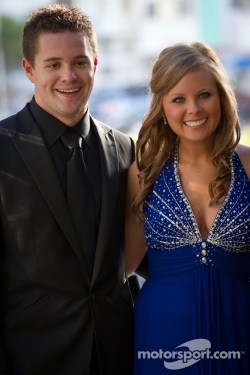 DAYTONA BEACH, Fla. (Dec. 6, 2011) – Remember standing at the ice cream counter as a kid? So many great flavors to choose from that sometimes you gave in to a double or triple scoop? That’s the way the 2011 NASCAR Nationwide Series season ended up – so many great stories were told.

From the “pick-a-series” rule that gave driver championship contenders an opportunity to truly chase a championship, to the first full year of competition for the new car, to new stars and veterans alike taking center stage, this past season was one that made its own headlines.

There certainly were some outstanding performances that took place during the recently completed 2011 NASCAR Nationwide Series season. The following is a look back at some of those standout performers and memorable races, as selected from discussions with the national series directors, competition department and NASCAR Integrated Marketing Communications managers. Additionally, click on the following links for special audio, video and photo packages commemorating the 2011 season.

Ricky Stenhouse Jr. – Redemption may be an over-used word in athletic achievement, but there’s no better way to describe Ricky Stenhouse Jr.’s recovery from infamy to the fame of winning the 2011 NASCAR Nationwide Series driver championship.

The story is worth repeating. Stenhouse, 24, barely made it through a 2010 season in which he filled Roush Fenway Racing’s shop with the remains of numerous Ford race cars. Relieved of his driving duties at one point in 2010 by owner Jack Roush, Stenhouse’s NASCAR career hung by the thinnest of threads. But the native of Olive Branch, Miss., listened – and learned – from the experience. He rebounded to claim Sunoco Rookie of the Year honors, in the process erasing the largest deficit in series history.

Stenhouse kept that momentum in 2011, winning two races, three Coors Light Pole Awards and piling up 16 top-five and 26 top-10 finishes. Stenhouse earned his first NASCAR national series win – and a reputation for never backing down – at Iowa Speedway in May, coming out on top of a door-to-door battle with his teammate Carl Edwards. His signature moment came three months later, also at Iowa, when he won despite a last-lap engine failure as Edwards rammed into Stenhouse’s rear, blasting him across the finish line.

Elliott Sadler (Honorable Mention) – His first full NASCAR Nationwide Series season since 1998 didn’t exactly get off to the rousing start Elliott Sadler had hoped for. He finished 38th at Daytona and left Speedweeks ranked 27th with just six points to his credit.

But the NASCAR veteran recovered, climbing to the points lead twice and challenging Ricky Stenhouse Jr. in what effectively was a two-man race throughout the last half of 2011. Sadler was a victim of an untimely wreck in the seasons’ penultimate race at Phoenix, costing him a real opportunity to take the title chase versus Stenhouse down to the season finale at Homestead-Miami. Still, his return to the series was a hit with the fans, who voted Sadler as the NASCAR Nationwide Series’ Most Popular Driver in an online poll on NASCAR.COM.

Comeback Driver of the Year

He was involved in an accident with his Turner Motorsports teammate, Justin Allgaier, resulting in a 32nd-place finish at Atlanta. He fell to 40 points behind the leader with eight races left, effectively ending his championship hopes. Then following the race at Dover, he was released by Turner. He was still third in the standings, but without a ride to keep that status. That was the low.

Despite a seemingly insurmountable task, he was able to work out a season-ending deal with MacDonald Motorsports. His finishes, although not what he had been accustomed to, were consistent enough to lock him into fifth place in the final championship standings.

Kenny Wallace (Honorable Mention) – Driving for an independent team – RAB Racing – and, by his own decision, without a paycheck – Kenny Wallace spearheaded one of the most unsung comebacks of 2011. In the process, he cemented himself in the record books by becoming the all-time starts leader in the NASCAR Nationwide Series.

Following the 2010 season, Wallace underwent a personal reinvention. He lost weight, got fit and rediscovered his “inner race-car driver” with his move to RAB. In addition to overtaking Jason Keller as the series’ starts leader – and becoming just the second driver in series history to surpass 500 starts – Wallace partied like it was 2005 registering or matching the following bests, all since that season: his first top-five finish, 11 top 10s and a seventh-place final championship ranking.

RAB Racing with Brack Maggard – Before becoming the primary face of RAB Racing, Robby Benton, 32, got started in NASCAR doing summer jobs in Robert Yates’ shop before serving on Davey Allison’s crew. He still displays a pair of Allison’s racing gloves on his office wall.

Before this season Kenny Wallace, 48, had produced solid numbers in a NASCAR career that totaled over 800 starts among its three national series. But he felt as though he was running out of time to continue to prove himself on the track.

The two joined forces in 2011, providing proof for one another that they could compete – and how. Benton’s RAB Racing team finished 14th in the final 2011 owner standings, the highest among single-car independent teams in the NASCAR Nationwide Series. Its turnaround can be traced back to 2010, when Boris Said edged Kevin Harvick Inc.’s Max Papis at the finish line in Montreal, giving Said his first NASCAR Nationwide Series win while rewarding Benton and RAB with the organization’s first victory. More importantly, RAB learned it belonged.

This year, Wallace brought with him a renewed energy. He helped lead the fourth-year organization into uncharted territory, where it thrived. In addition to RAB finishing tops among one-car independents in the owner rankings with an average finish of 15th, Wallace was seventh in the final driver standings, collecting one top five and 11 top 10s. Since 2008, the team’s only previous top-five/top-10 finish was Said’s victory.

With Ricky Stenhouse Jr. winning the 2011 driver championship, this year marked the first time that the same owner claimed both the NASCAR Nationwide Series driver and owner titles with different teams.

JGR’s No. 18 Toyota, helmed mostly by 2009 series champion Kyle Busch, appeared unbeatable in the early going, winning five of the season’s first 10 races. But Edwards and Roush Fenway’s No. 60 Ford team, backed by veteran crew chief Mike Beam, kept chipping away at the deficit. He closed on his rival in September and kept up the pressure through the season finale at Homestead-Miami Speedway.

Edwards competed in 34 of the season’s 34 races. GRAND-AM Road Racing veteran Billy Johnson drove the No. 60 at Road America and was headed for a top-five finish before being struck down by mechanical problems.

Timmy Hill – Winning the Sunoco Rookie of the Year Award in one of the most hotly-contested battles in series history is a testament to the resilience of Timmy Hill and his Rick Ware Racing team.

To begin the climb, Hill didn’t race in the season-opener at Daytona. He wasn’t yet 18. Twice during the season, RWR tragically lost a member of its team. Then, just one week after Hill had been honored at the season-ending banquet as the series’ top rookie, another member of the RWR organization unexpectedly passed away.

But through it all, Hill managed to grow in the moment. He battled fellow rookies Blake Koch and Ryan Truex from the moment the trio began racing against each other at Phoenix in February. His main competition turned out to be Koch, as Truex wasn’t able to secure a ride for the season finale, losing his rookie standings lead in the process.

Hill’s best result was 11th at Road America. He also posted finishes inside the top 20 at Talladega, Chicaogland, Richmond and Darlington. His Chicago result came three days before his high school graduation. He and Koch, who became good friends throughout the battle, finished just one position apart six times. The rookie award came down to the final race where the driver who finished in the best position between the two would claim the honor. Koch finished 23rd. Hill was 21st.

Blake Koch (Honorable Mention) – Koch didn’t race at Daytona to open the season. He also wasn’t entered at Las Vegas. But with full sponsorship and a fresh, upbeat attitude in addition to solid skills, Koch’s season with MacDonald Motorsports truly began at Auto Club Speedway and showed improvement throughout. He drew close to Timmy Hill for the rookie honor at the season’s quarter pole and even took a slim lead late, thanks in part to a five-race string of finishes that bested Hill, including matching his career-best finish of 14th at Phoenix. But the string broke at Homestead, the worst time for Koch’s award aspirations.

NAPA Auto Parts 200, Circuit Gilles Villeneuve – Marcos Ambrose, the class of the NASCAR Nationwide Series Montreal field, every year had continuously failed to bring home a victory for various reasons. He vowed to return to this event until he won. His chances this year again looked slim after having to start at the rear for missing qualifying while traveling from his NASCAR Sprint Cup duties in Michigan – which took him from a plane to a helicopter to a boat to finally get to his spot on the starting grid – just before the race.

He also had to deal with the hometown favorites: Jacques Villeneuve (the polesitter), Patrick Carpentier (making his last start before retiring) and Alex Tagliani (also started on the front row).

Villeneuve led 29 of the first 44 laps but his chances went away when he and Ambrose tangled in Turn 1 after a restart with 26 laps remaining. Ambrose powered through the mishap and kept pushing through the field, finally taking the lead from Tagliani on Lap 65. This time he held on around the final turn to take an improbable victory.

The excitement continued after the race when Carpentier’s frustrated crew chief Jerry Baxter grabbed Steve Wallace by the hair while Wallace was still in his car. Baxter’s pit road rage was in response to Wallace spinning out the local hero on Lap 56, ruining Carpentier’s final race.

U.S. Cellular 250, Iowa Speedway (Honorable Mention) – In its short NASCAR Nationwide Series history, Iowa Speedway is quickly becoming a track where the outcome can be counted on as one to remember.

Both races at the .875-mile track this season were sellouts (as have all series races there); both were thrillers and both had the same winner – Ricky Stenhouse Jr. – and the same protagonist – Carl Edwards.

But the August race resulted in one of this year’s top moments.

As he was leading out of Turn 4 on the final lap, Stenhouse’s engine unexpectedly gave way. Edwards, running a distant second but making obvious headway after Stenhouse’s misfortune, had his view blinded by the smoke and oil from Stenhouse’s expiring motor and plowed into the rear of the No. 6 Mustang. That short chain-reaction sent Stenhouse across the finish line first. The victory, and Stenhouse’s championship season, was indeed “Smashing,” as the next day’s headline blared in the Des Moines Register.