Ryan Newman took a new road to an old result in qualifying at Charlotte Motor Speedway on Thursday. Newman used a unique high line around the 1.5 mile circuit and put in the fastest lap of 187.546 miles per hour to claim the pole for ...

Ryan Newman took a new road to an old result in qualifying at Charlotte Motor Speedway on Thursday.

Newman used a unique high line around the 1.5 mile circuit and put in the fastest lap of 187.546 miles per hour to claim the pole for Sunday's Coca-Cola 600 at Charlotte Motor Speedway. 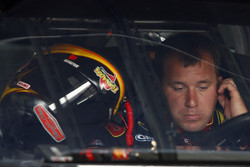 It was his ninth pole at Charlotte.

"It was a great run," Newman said. "That was the most courageous lap I've probably ever had around here. I told the guys I was going to stick to what I ran in practice and that was the top side. I've never run into the corner at 200 miles per hour before and made it stick. I've never been a guy to run the wall, let alone in qualifying."

Newman also won the pole here last year and finished second. His nine poles here leads all active drivers and he is second in all-time poles here to David Pearson.

Newman said that he learned that the high line could be the fastest way around the track during practice earlier in the day.

"I watched what Juan (Pablo Montoya) did and he was pretty good off of (Turn) 2 and all the way down into 3," said Newman, who has 46 career poles. "He just didn't get 3 and 4 quite right and he was the best car by far in practice. It was a great run for us. I used his example and fortunately had a really good lap."

Newman has never won here and the most laps he's led here was 49 when he started on the pole in May 2003. This is the fourth straight week that he will star inside the top six.

Kurt Busch nearly knocked Newman off the pole late in the session when he also laid down a terrific lap that missed the top spot by just 3/100ths of a second.

"I'm really proud of my guys with how this car is running," said Busch, who equaled his best qualifying performance here, matching his second place start in 2005.

Busch has three top-10 finishes in the past five weeks and won the Sprint All-Star Race here last Saturday.

"It's just a good vibe we have," Busch said. "Things are going good and hopefully we can get it put together for the full 600 miles."

Meanwhile Martin Truex Jr. followed up his pole run at Dover two weeks ago with the third fastest qualifying time. Truex has four top-10 finishes this year and is looking for his first win in nearly three years.

"Business is picking up," Truex said. "The NAPA Toyota has been really good here. That was a good run. It feels good and we're starting to have fun again."

Kasey Kahne also went out late in the session and put down the fourth fastest time while Jimmie Johnson, who won here from the pole last October, will start fifth.

Johnson said he was thinking about running the high line like Newman did after liking that route in practice but decided to stick with the low line in qualifying.

"The bottom always prevails in most cases but not today," Johnson said. "I took the bottom. The car was good -- maybe a little too loose - and I got a great lap."

Joe Nemechek was one of the drivers outside the top 35 that had to get into the race on time. He qualified 19th.

Herta enters blue-flag debate – and admits he killed a squirrel