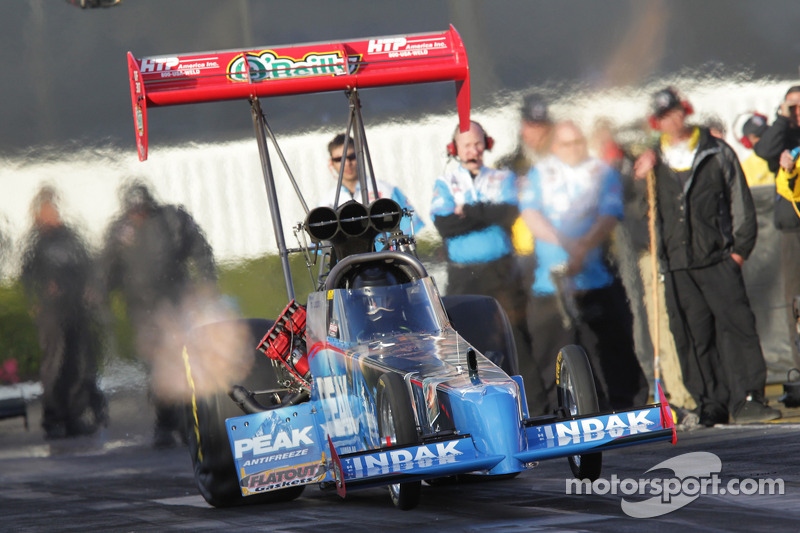 POMONA, Calif. – It wasn’t the way Zizzo Racing wanted to end its 2011 campaign, but TJ Zizzo and his Chicago-based teammates have nothing to hang their heads about. A season highlighted by an upset win of championship contender Spencer Massey at the team’s home track, Route 66 Raceway in Joliet, Ill., also saw several improvements in its qualifying program and race day tune-ups.

In the first round of the Auto Club NHRA Finals Sunday, Zizzo was paired with fellow second-generation racer Brandon Bernstein. Despite a quicker reaction time by Bernstein, Zizzo was faster nearly the entire 1,000 feet by .06 seconds at one point. Unfortunately, the PEAK Motor Oil/Herculiner dragster’s supercharger failed near the finish line, giving Bernstein the round win and ending Zizzo Racing’s season.

“We were on a career-best pass!” Zizzo said after the run. “I never saw Brandon until the supercharger shaft broke. Our supercharger program is definitely high on our list for 2012.

“It was a season full of challenges, but we feel like we met those challenges head on and came out on top more times than not. My team is great, our fans are great and I want to thank both for a great season. We’re already preparing for a great 2012 season! We also want to thank PEAK Motor Oil and Old World Industries, along with Misix, INDAK, all of our great marketing partners and especially Kenny Youngblood for designing a beautiful paint scheme for us and honoring us with his amazing artwork all season long.”

Zizzo Racing will make an announcement very soon regarding its 2012 plans.