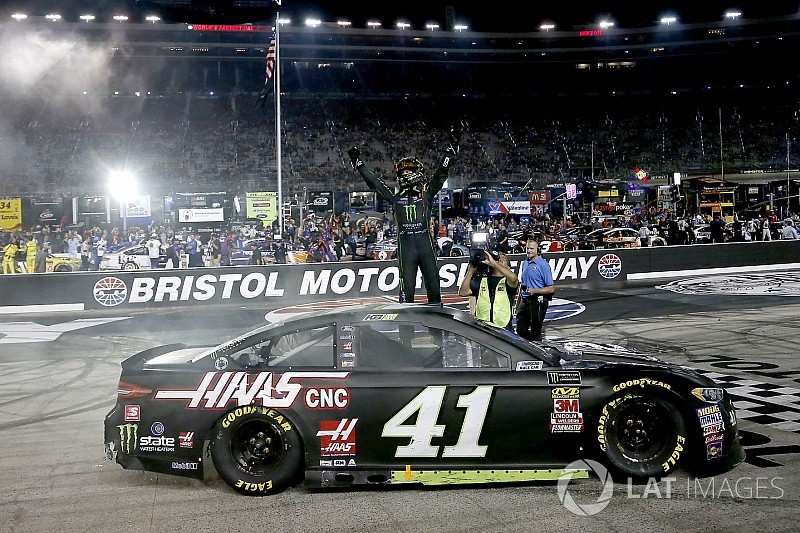 If I told you a Busch won Saturday’s annual Bass Pro Night Race at Bristol Motor Speedway you’d probably guess it was Kyle.

And that’s not a bad guess because the youngest Busch brother had seven career wins at Bristol as he headed into the 500-lap race on one of NASCAR’s most popular tracks.

However, he still had seven after the completion of the Monster Energy Cup Series race.

If I told you the race was won by a driver out of the Stewart-Haas Racing stable, you’d probably guess Kevin Harvick and again, that would be a mighty fine guess. Harvick had already won seven times this season when the green flag dropped at BMS.

He still had seven wins several hours later when the checkered flag appeared.

Nope, the 40th annual running of the night race saw Kyle Busch wreck early, somehow manage to come back and contend, then cut a tire after contact late in the race. Fans along the fence in Turn 4 jeered the 2015 champ as his car sat disabled on the apron of the track.

Busch, driver of the No. 18 Toyota for Joe Gibbs Racing, has six wins this season, a spot in the playoffs and the points lead. Let ‘em jeer all they want.

Harvick, on the other hand, contended early until an issue forced him to pit road under green and he went two laps down. He spent the bulk of the series’ 24th race working his way back onto the lead lap.

If anyone jeered him, it went unnoticed. Like Busch, he’s playoff bound and among the few favorites expected to compete for the title in Homestead, Fla., later this fall.

The race winner was a Busch and came out of the SHR camp and it was Kurt Busch, and that just goes to show you how crazy and unpredictable NASCAR can be.

Not that Kurt Busch wasn’t a deserving winner. The only thing the 40-year-old seemingly did wrong all night, besides not comb his hair or don a cap after the fact, was leave his helmet and gloves on the roof of his race car when he climbed out to grab the checkered flag and do a quick on-track interview.

Busch was fourth in points heading into the race and fourth when it ended but more importantly he was a winner for the first time this season and like his teammate Harvick, guaranteed a spot in the 16-team playoffs that begin next month.

His last win came early last year. In the season-opening Daytona 500. That’s 58 races. In the meantime, 18 others have visited victory lane.

The win says plenty about SHR – the organization has put three drivers in the winner’s circle this year with Harvick, Clint Bowyer and now Busch. A fourth teammate, Aric Almirola, has run well enough to win. When and if he does, no one should be surprised.

The win also says a lot about Busch, who has suddenly found himself back in the spotlight now that reports of a potential departure from SHR at season’s end have surfaced.

Drivers and teams don’t normally shine when their future is being questioned and what they might or might not be doing next season suddenly starts to overshadow what they are trying to accomplish in the here and now.

But Busch and crew chief Billy Scott and the No. 41 team put all that aside and overcame an early-race crash (cosmetic damage only) and late-race restarts and when the checkered flag flew it was the No. 41 first across the line.

“Winning is great, any time, no matter how long there was in between,” Busch said afterward. “The motivation is always there. …

“For me, you never waiver, you keep focused. The timing was perfect with our team gelling, this Bristol night race (on tap), go after it.”

As for the reports …

“You just stay … laser focused on the task," he said.

Kyle Busch: “It just wasn’t meant for us this weekend”