Over half the field taken out in consecutive wrecks at Daytona 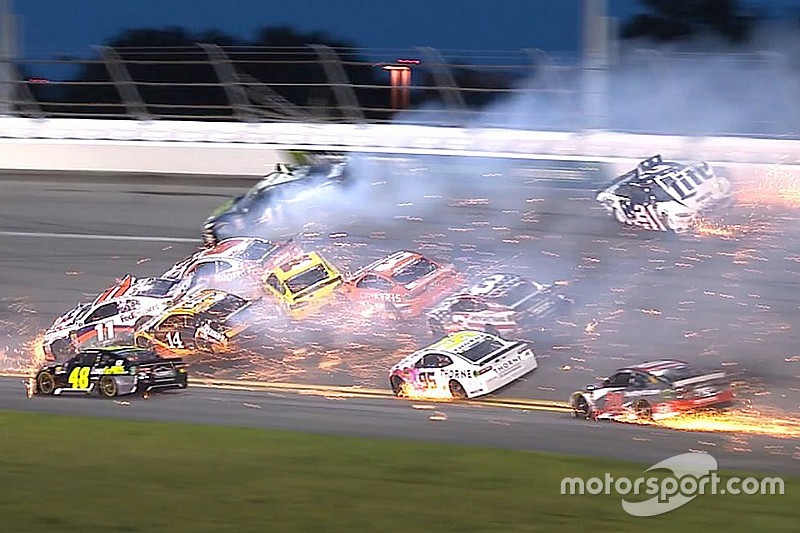 Ricky Stenhouse Jr. hooked Brad Keselowski while racing for the lead to trigger a 20-car accident on Lap 54 at Daytona International Speedway.

The ‘Big One’ is not unusual at a restrictor plate track, however this early in the race is not common in the Monster Energy NASCAR Cup Series.

Rookie William Byron was leading the Coke Zero Sugar 400 when he moved down to block Keselowski who backed off and was bumped in the right rear by Stenhouse Jr. igniting the first big accident of the race.

For Keselowski, placed blame on Byron for throwing a block, which he says created the situation that knocked he and several others out of the race.

The accident collected a lot of contenders with all four Stewart-Haas Racing cars, three of the four Hendrick Motorsports cars and all three Team Penske cars among those collected.

Denny Hamlin also suffered heavy damage in the accident and couldn’t tell what started it from his angle.

"I don't really know, the (No.) 2 (car) was sideways in front and he got wrecked and so did everybody else,” said Hamlin. “It's unfortunate. The Coke Zero Sugar 400 is usually this kind of race but it usually happens much later.

"Now it's a total crapshoot with most of the normal contenders taken out."

On the ensuing restart, Stenhouse was at the epicenter of yet another incident as he attempted to side-draft Kyle Busch for the second position. Contact was made and chaos ensued as Busch came down into race leader Byron, sending both cars into the outside wall.

"I don't know, just disappointing to get crashed out by the same guy that caused the first wreck," said Busch.

"You always come to Daytona waiting to crash, just trying to figure out when and where and hoping you walk away from it."

Byron agreed with Busch's assessment, saying, "just 17 car hooked the 18 into me. Seemed like he was being really aggressive. Second time we've been on the wrong end of something with him.

"At least we led some laps so that was good."

Kyle Larson, Jamie McMurray and Trevor Bayne were also caught up in it.

Stenhouse went on to win the second stage of the race.