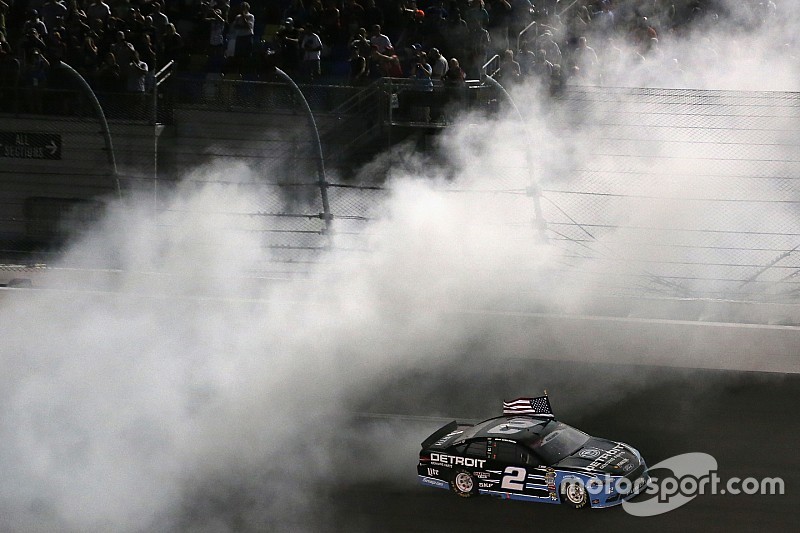 After Aric Almirola won the Xfinity race on Friday, Brad Keselowski led the Blue Oval brigade to Saturday’s win in the Coke Zero 400.

“I'm really proud of this Roush Fenway team,” Bayne said. “We had a pole this weekend, three cars in the top-10, two in the top-five. That last run, starting 12th and being on the top and getting a run in that lane and having a lot of help from the 3 (Austin Dillon), we were able to work the top and get a P3.”

While Ford is used to Team Penske pulling its weight, it was also a solid weekend for a Roush organization that has been on a noticeable upswing after three years in the doldrums. Greg Biffle, who started from the pole, recovered to finish eighth after the No. 16 car was involved in a 22-car wreck on Lap 90. Still, it’s the first time three Roush Fords have finished in the top 10 since the August race at Bristol Motor Speedway in 2014.

“It was a rough night after we got in that wreck,” Biffle said. “We got shuffled out of line, and that will happen with speedway racing. We were working our way back up and running with the 4 car (Kevin Harvick), and a few of those guys and somebody got turned right in the middle.

“We got pretty severe damage and were able to come back and finish eighth. We had a pretty fast car and the 2 car (Keseowski) was unbelievably fast. We have some work to do still, but I'm so proud of my guys. This Ford EcoBoost Fusion ran really well.”

After winning the pole on Friday, Biffle offered props to veteran crew chief Jimmie Fennig, who has taken over the speedway program at Roush. Handling was a key component for competitive cars — particularly at Daytona.

All about the engine

“The leadership team at Ford Performance, Raj Nair (Chief Technical Officer) and Dave Pericak (Director of Ford Performance), have inspired everyone to step up their game and given us the resources we all need to win race and compete for championships,” Yates told motorsport.com.

“This win is special to me for two reasons: first, it’s Brad Keselowski’s first win at Daytona, and second, it keeps the Yates name in Victory Lane here.”

Yates engines have powered Keselowski to four of his five restrictor-plate wins. Given the Yates family history on restrictor plate tracks, it’s not surprising that Doug Yates takes pride in his team’s accomplishments.

“Last night’s Xfinity win with Aric was really special as well. Fred Biagi and Bill Denbeste are great guys," Yates said. "To win the Cup pole with Roush Fenway and Greg Biffle validated the fact that Jack and his team are making great strides. For Trevor and Ricky to finish in the top five, overall it was a fantastic weekend at Daytona for Roush Yates and Ford Performance.”