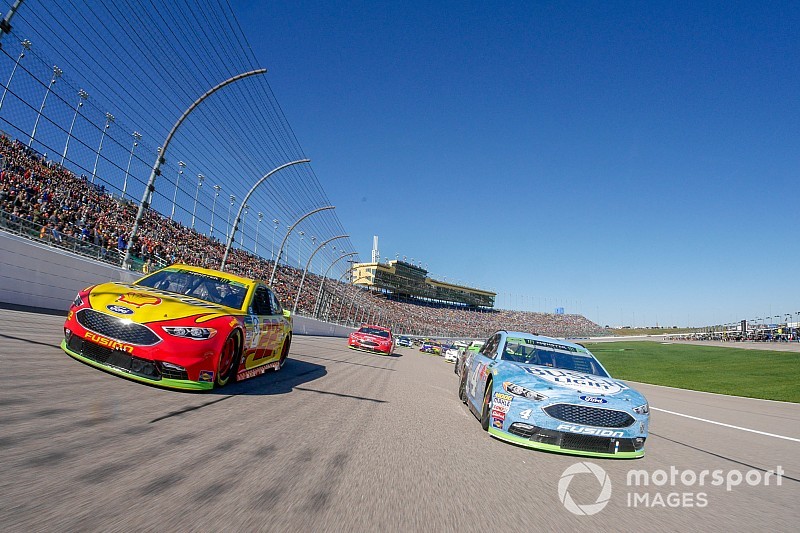 Ford has two drivers with a chance to win the 2018 championship as both Kevin Harvick and Joey Logano advanced into the Championship 4.

The Blue Oval has won 18 of the 35 points races run this year with Stewart-Haas Racing holding the majority at 12. But the other six belong to Team Penske. Additionally, both organizations have gotten all of their drivers to Victory Lane this season.

Walt Czarnecki, executive vice president of Penske Corp. and vice chairman of Team Penske, believes that the addition of SHR made the entire Ford camp stronger.

"Having them (SHR) come into the Ford camp was a huge plus for everybody who runs the Ford oval. I think Tony and Gene and everybody over there helped us elevate our game, and I think that under the corporate aegis of Ford Motor Company, they got us working together, and I think, frankly, it's one of the reasons we're here today.  We're still competitors, and we make that very clear, but I think in some ways we might have been able to help SHR, and I think in some ways they've been able to assist us, so I want to make sure that we recognize that point, our friends in Dearborn for doing that.”

When Stewart-Haas Racing came into being, they raced under the Chevrolet banner and even won their first championship with Chevy in 2011. But after the 2016 season, they made the decision to switch to Ford. Despite winning the season-opening Daytona 500 with Kurt Busch, they struggled to find their footing elsewhere. It wasn't until Sonoma in June when Kevin Harvick scored his first win as a Ford driver, and he only won once more at Texas in the fall. Ultimately, it wasn't the season they wanted, but it set them up for an incredible 2018.

Harvick has won eight races this season (a personal record) and enters Homestead as the favorite in the eyes of many. And beyond that, all four SHR drivers advanced into the Round of 8 with an opportunity to make it to Homestead.

SHR co-owner Tony Stewart took Czarnecki's comments to heart and reflected on how far they've come in just a decade.

“It's very humbling," Stewart said. "You know, obviously 10 years ago we were a two‑car team. We didn't know where we would end up 10 years later, and then we knew what we wanted to do and what our goal was, but still with that and the technology is so great and changes so fast in our sport, you can never predict where everything is going to end up. You have to do the work. You have to have the right people in place, and the rest of it has to work itself out.

"Obviously Roger Penske is probably the greatest car owner the world has ever seen in motorsports as far as all the spectrums of racing that they cover. That's a huge compliment. You know, and it's fun. It's been, like Walt mentioned, amazing to work with Ford. It has helped us take our program, obviously, to a level that it's never seen before, and the Penske side and the partnerships that we have together, I mean, we help raise the bar for ourselves amongst each other, and that transfers on the weekends to the rest of the competition.

"We're proud of that partnership with Ford.  We're proud of the working relationship we have with Penske and Roush and the other Ford organizations. Together we continue just to press each other harder to make our programs better.”

A Penske resurgence in the playoffs

Team Penske got off to a slow start this year, but as the playoffs neared, they came to life. Brad Keselowski won three consecutive races to end the regular season and start the postseason, while his teammates Ryan Blaney and Logano have both captured victories of their own since then.

"It was quite an accomplishment," Czarnecki said of all seven Ford teams between SHR and Penske making the 16-driver playoffs. "I think we had all seven of our ‑‑ four, and three got in. I just see a continuum of this. I don't see any abatement on the part of Ford Motor Company. They're enjoying the success, and I think I'm correct that Ford is in a position to win their first manufacturer's championship in 14 years, and that's a big deal. That's a big deal to them. And so we want to be part of that.