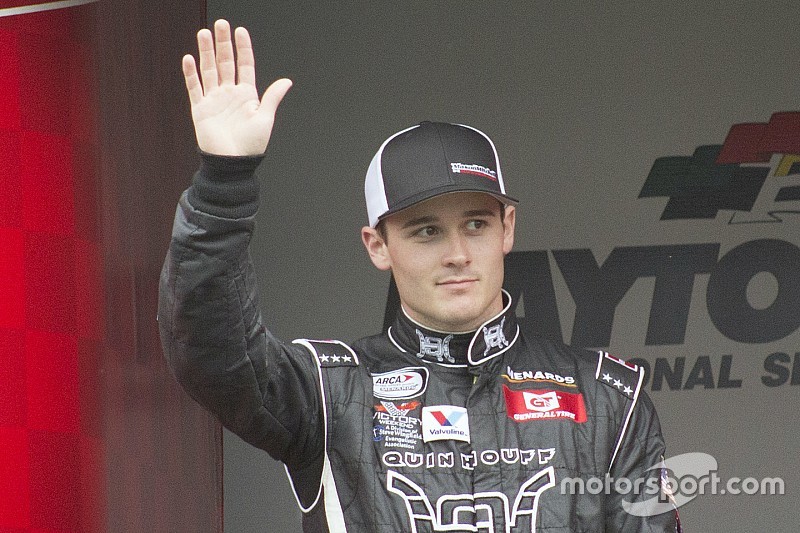 With just two handfuls of Xfinity Series starts to his name, Quin Houff is on a fast track to NASCAR’s top series.

Spire Motorsports announced this week that Houff would handle the driving duties for the team’s No. 77 entry for roughly half of the 2019 Monster Energy NASCAR Cup Series schedule. He will make his series debut March 10 at Phoenix.

Houff, 21, drew attention after capturing several wins in the CARS Response Energy Tour before moving to the ARCA series in 2017. He has made 10 Xfinity Series starts over the last two seasons with a career-best 12th-place finish coming at Iowa Speedway.

“I cannot thank Jeff Dickerson and T.J. Puchyr from Spire Motorsports enough for the opportunity to make my dream a reality. There are thousands of drivers who make racing on Sundays their goal,” Houff said.

“To be one of the few drivers who get to realize that goal is a true blessing. It's humbling for me to compete at the pinnacle of the sport, but it also a testament to all those who stood behind me to this point and those who will continue to do so in the future.” In December, Spire purchased the charter from the now-closed Furniture Row Racing No. 78 team. The Furniture Row charter is one of the most valuable in NASCAR as its worth is decided by the previous three seasons of competition, when it finished 11th, first and second in the series standings.

Furniture Row closed its doors at the end of the 2018 season and its driver Martin Truex Jr moved to fellow Toyota-aligned team Joe Gibbs Racing for 2019. Jamie McMurray will compete in the season-opening Daytona 500 using the charter from Spire in conjunction with Chip Ganassi Racing. A driver for the season’s second race at Atlanta has not been named.

“As a rookie, I’m hoping to learn as much as I can about the cars and how they handle and react,” Houff said. “I&#39;m looking forward to learning some new tracks as well as revisiting some others. I am also anxious to see how these long, 400- and 500-mile races play out.

“I just want to go out there and put the car where it needs to be because this is the top of the sport
and I have to learn how these guys race in order to become a better driver myself.”