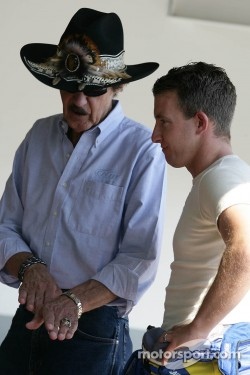 Allmendinger on Bristol Motor Speedway: “Bristol is one of my favorite places to go. I love that place, but it hasn’t been kind to us lately. It’s a fast little half-mile track and it always has a big crowd full of excitement. I feel like we’ve got a really good short track program and I feel like Bristol is going to be a lot better for us this year. To be ninth in the points after the first three races is a great feeling. Now if we can go to Bristol and have another Top-10 finish, that will be another step in the right direction.”

Spotter Tony Hirschman on Spotting at Bristol: “Bristol is one of the hardest tracks to spot at, especially since they reconfigured it with progressive banking. Everyone used to fight for the bottom of the track and now the car can run on the bottom, middle or top grooves of the track with success. A big part of my job at Bristol is to let AJ know who is running where and to try and keep him up-to-date on where the fastest cars are running. I also have to watch out for trouble ahead. Bristol is so fast and everything happens so quick, you can be a straightaway behind the start of an accident and still get swept up in it. I just have to be on my toes every second of every lap. It feels like I never really get a break, so it's one of the more mentally taxing races that I spot. If I can help get AJ through the race with the Best Buy Ford intact and he comes home with a good finish, it's especially

satisfying. There is such a fine line when racing at Bristol, the driver has to race aggressively because that's the nature of the track, but yet still take care of the car for all 500 laps so he still has something to race at the end. That's the main thing that I try to remind AJ of all day long.”

Hirschman on Working with Allmendinger: “This is the third year I've worked with AJ. We started working together in 2009 and I really enjoy working with him. One thing I can always say is that he gives 100 percent every single lap. He's not out there to just ride and make laps, he’s out there to pick up positions and win races. AJ and I have a great working relationship, it's been rewarding to watch him mature as a driver over the last three seasons. I look forward to continued progression as a team and getting our first win together. We've improved every year in the points and we’re all looking at the big picture. We want to be in contention for the Chase, and I think that is a realistic goal for all of us on the No. 43 Best Buy team.”

Chassis History: The No. 43 Richard Petty Motorsports team has prepared chassis No. 710 for this weekend’s event at Bristol Motor Speedway. This will be the first time this Best Buy Ford has been run in 2011.

Voting is under way to determine the 2011 NASCAR Wheaties Fuel Most Popular Driver. Vote for your favorite RPM driver at www.WheatiesFuelMostPopularDriver.com. The 10-week playoff format will return, with the top 10 vote-getters competing for top accolades at the season’s end. Fans can vote once a day for their favorite NASCAR Sprint Cup Series driver.

Fun Fact: Bristol Motor Speedway is known for its unique driver introductions. Each driver will be introduced to the crowd with a song of his choice playing in the background. Allmendinger has chosen the song “Turn Around” by Flo Rida for his introduction.

Ambrose’s Thoughts After Vegas: “Finishing fourth In Las Vegas takes a bit of the pressure off of me. I’m driving for a new team and a new sponsor, so I really feel the pressure to perform. It’s really great that in just three races we got our first Top-five finish and a starting place on the front row. It gives me a boost of confidence and all the guys on this Richard Petty Motorsports team some confidence in me and my driving ability. Confidence was definitely the number one thing we got out of Vegas. I haven't had a chance to test very much with my new team on 1.5-mile ovals, so it was like baptism by fire and it turned out to be a great day for us.”

Ambrose on Going to Bristol: “We have a good boost of momentum going into Bristol this weekend. It’s our first half-mile track and I want to perform well. It’s a fast track with a great atmosphere full of energy and electricity. I’m really excited to have DEWALT on my Ford Fusion at Bristol and I’m looking forward to having another great weekend of racing.”

Parrott’s Thoughts After Vegas: “Las Vegas was great, we ran well from the time we unloaded on Friday. Marcos drove an excellent race and the crew did a phenomenal job in the pits. I think our fourth-place finish at Vegas is a telling sign of good things to come. Based on how the team is performing and how Marcos is driving, I have a good feeling about going to Bristol and I think the DEWALT Ford is going to be really fast this weekend.”

Crew Chief Todd Parrott’s Keys to Getting Around Bristol: “Bristol is the fastest half-mile track we go to. There are a lot of things happening and the driver has to be able to react quickly to different situations. It’s one of those tracks where a driver can get caught up in a wreck very easily. We have to have a car that rolls through the center of the corners and can stay on the bottom of the race track. Late in the race we want a car that can move to the top of the track because the higher groove gives the car more momentum off of the corners. Bristol is a tough race track, you either love it or you hate it. You never know what’s going to happen.”

Chassis History: The No. 9 RPM team has prepared chassis No. 693 for the 500-lap race at Bristol Motor Speedway. This DEWALT Ford Fusion was previously run last season at Richmond (Va.) International Raceway.

The No. 9 Richard Petty Motorsports Ford Fusion will have a different look this weekend. DEWALT will make its first appearance of the year as the primary sponsor of the No. 9 machine.