Roundtable: Can Jimmie Johnson end his winless streak at Texas? 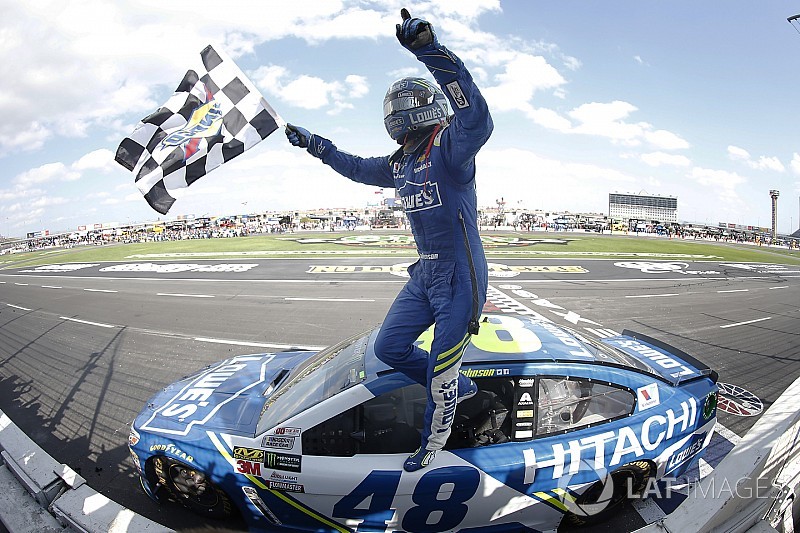 After an off-weekend following Clint Bowyer's triumph at Martinsville Speedway, NASCAR returns this weekend for another intermediate track in Texas Motor Speedway.

Jimmie Johnson won this race last spring and has also won five of the last ten Cup races held at Texas Motor Speedway. Do you think he can break his winless slump of 29 races this weekend?

Jim: Anything is possible, I suppose, but I haven't seen anything from Hendrick Motorsports or the No. 48 team so far to indicate they are on the cusp of a victory at an intermediate track. But that's the thing about Jimmie Johnson - he can surprise you at any time and serve up a reminder as to why he is a seven-time Cup series champion. It certainly would be good news for HMS as a whole if Johnson were to win or put together a strong race from start to finish.

Nick: Although the statistics say yes, the 2018 season says no. I expect Martin Truex Jr., Kyle Busch and Kevin Harvick to be the stars of the show at Texas while Hendrick Motorsports continues to play catch-up. They just haven't proven that they should be considered a contender this weekend based on their recent performances. However, winning on strategy is a completely different animal.

Tim: While Jimmie Johnson has an impressive record at Texas (like he does at many tracks on the schedule), I just don’t see him being a factor this weekend based on his recent performances. I think another top-10 would be like a win for that team right now. As for picking a driver at Hendrick Motorsports, I would pick Chase Elliott to win out of the four drivers this weekend.

Tom: I don't see Johnson's run ending just yet. We've not seen a Chevrolet in victory lane since Daytona and his Hendrick team-mates look better placed to beat him to the top spot currently. If he can make another step up on his top 10 place finish in California, he'll be edging closer to breaking the slump. Chase Elliott and Alex Bowman look better placed currently.

Landon Cassill has landed the ride previously held by Jeffrey Earnhardt with StarCom Racing. What do you think would be a successful season for that new team and Cassill this season?

Jim: Honestly, if the team remains intact with Cassill in the driver's seat until the end of the 2018 season that would be a victory in itself. The organization is basically starting from scratch and needs to make a lot of improvement. However, if there is one driver who has been able to get the most out of the limited equipment he has at times driven in the Cup series, it's Cassill. He should at least be able to tell the team where it's lacking and offer some recommendations on what to do to improve.

Nick: Don't try to be a hero. Don't push the equipment beyond its capabilities. Keep the car in one piece. If he can do these things and the team can actually go to the end of the season without changing drivers again, then it would have been a successful year. They are brand new and are in a building phase. This is the time for learning and improving so they can come back stronger in 2019.

Tim: I think Cassill has the experience to help the team grow and get better on track, but they have a long way to go being a startup team. I think if they could score top-20 finishes and maybe grab a top-15 here and there this season will be a ‘victory’ for the team.

Tom: It's very simple for Cassill: he has to seize the chance given to him after coming in from the sidelines. Then he has to avoid the poor results that Jeffery Earnhardt picked up. It's always a building year in a first campaign and Cassill has to contribute to that on and off the track. For StarCom, it has to make sure Cassill can contribute to its cause, find some stability and make sure it's better placed going into year two.

Kevin Harvick won the last Cup race at Texas last fall during the playoffs. Could we see Harvick start a new winning streak beginning at TMS this weekend?

Jim: Absolutely. Harvick dominated the 1.5-mile tracks at Atlanta and Las Vegas already this season and there is no reason why the No. 4 team shouldn't be in contention this weekend at Texas. Given Harvick and Stewart-Haas Racing's current successful run can be traced back to Harvick's victory last fall at Texas, there is even more reason to believe Harvick should be a favorite to make it two in a row at Texas.

Nick: Oh definitely. Although I don't think he'll go on to win three in a row again, he's easily in my top three when it comes to Texas picks. He beat Truex at his best last fall and the No. 4 team is arguably superior now, so it would be foolish to think he won't be a serious threat at TMS.

Tim: I think even Las Vegas will make the Stewart-Haas Racing team the favorites to win a title this season at this point based on the performance of all four drivers so far this season. Every driver has shown signs of being able to win a race and lead laps and if not for two accidents, could have all six Cup wins so far this season. Harvick has shown he’s clearly the most consistent winner and there is no reason to think he can’t win this weekend and start a new streak.

Tom: It would be hard to bet against it. Clint Bowyer's win for Stewart-Haas Racing proves the team is competitive across its four-car team and at most tracks. Kevin Harvick has been a cut above his team-mates and I expect that to continue.

If you could pick a surprise winner for Saturday's NASCAR Xfinity Series race, who would it be and why?

Jim: Given his exceptional performance and victory at Homestead-Miami Speedway last fall, I think Cole Custer could earn his first Xfinity Series victory of the season this weekend at Texas. However, given the recent history of Xfinity Series races at Texas, it's going to take quite a lot for a series regular to come away with a win. Cup series drivers - particularly Erik Jones - have had a stranglehold on those races in recent years.

Nick: My pick would be Christopher Bell, but since you said 'surprise' winner and I don't want to choose Custer since he's already been selected twice over, how about Tyler Reddick. The JR Motorsports driver won at Daytona and hasn't slowed down any since then.

Tim: I agree that probably Cole Custer will be the ‘surprise’ winner but it’s hard to go against a Cup Series regular at this track. I also think we could see a JR Motorsports driver run up front for most of the day, but it will be hard to beat a Cup regular at this 1.5-mile facility.