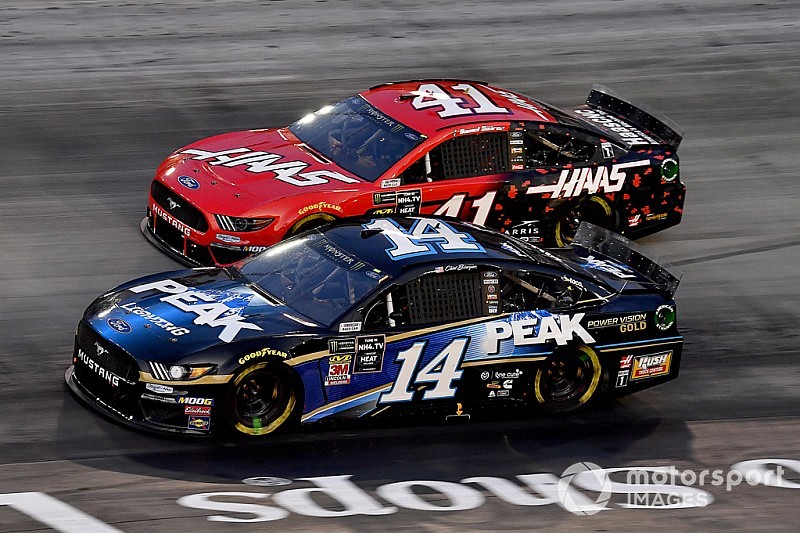 On this week's NASCAR Roundtable, we discuss the etiquette of slower traffic at the end of races, the tightened playoff fight as two teammates face off and the upcoming road courses for the Xfinity and Truck Series.

Ryan Newman raced Matt DiBenedetto hard late in the Bristol race while trying to stay on the lead lap and the two made contact. Do you think that was just racing or did Newman do something wrong?

Jim Utter: While it may not be a popular answer for race fans, I don't have any problem with how Newman raced on Saturday night. He was not a lap down (as many claim), he was on the tail end of the lead lap, doing his best from going a lap down. Under those circumstances, it's on the race leader to get around a slower car. If Newman was already lapped (or any other driver in that situation), then I believe those drivers should clear the way for those racing for the win.

Nick DeGroot: Newman was well within his rights to try and stay on the lead lap as he is in playoff contention, but when you start banging fenders with the leader at the end of a race, that seems a bit much. Especially in that situation where you have a driver going for their first win. I don't expect him to pull over, but I don't expect him to be bouncing off the leader either.

Tim Southers: While I think it was just hard racing (which Newman does on a regular basis with all competitors) I feel that late in the race Newman should have not raced DiBenedetto so hard. I know this comment will draw the ire of some people as he was 'technically' on the lead lap, but that late in the race I feel should offer a different set of circumstances. Then again, if he would have just pulled over, I'm sure fans would have been upset that he didn't' race hard enough. There are definitively two sides to this story.

Daniel Suarez moved ahead of teammate Clint Bowyer in the playoff fight. Could you see it coming down to these two SHR cars and only one making it? If so, which one?

Jim: The final playoff spot certainly could come down to Bowyer and Suarez and right now I would have to go with Suarez. Bowyer has just two top-10 finishes in his last 10 races, while Suarez has finished eighth or higher in his last two outings. Bowyer's team just seems to be having trouble putting complete races together, something he desperately needs to claim the final playoff berth.

Nick: It really is looking that way and if so, I'd go with the No. 41 team. Clint Bowyer is far more experienced but he's had a really rough go of it as of late with a lot of incidents and inconsistency. Meanwhile, Suarez seems much smoother and able to put races together even when the result isn't stellar. And when it comes down to a point or two, another incident by Bowyer will likely sink his playoff hopes.

Tim: I just think the experience of Clint Bowyer will prevail next week at Darlington Raceway as it's one of the most challenging tracks on the circuit. I also could see Daniel Suarez making it to the postseason but he will really have to turn it up a notch at Darlington and Indianapolis.

Given his success of late in the Cup series, now that DiBenedetto is driving the Joe Gibbs Racing's No. 18 this weekend do you think he could win Saturday's Xfinity Series race at Road America?

Jim: Given DiBenedetto has a pair of top-10s in the first two road courses in the Cup Series this season, I certainly think he could pull out a victory in what is one of the Xfinity Series' strongest teams. Coming off his career best Cup finish, picking up his first NASCAR national series win would be a nice bonus.

Nick: He's definitely one of the contenders. That car is fast no matter who is driving it but DiBenedetto is also very strong at road courses. He finished fourth at Sonoma and sixth at Watkins Glen in the two Cup races this year. I could see him, Allmendinger and Cindric being the three to beat.

Tim: Very easily. Everyone knows Joe Gibbs Racing cars are really good in the series (well maybe except for Bristol where Kyle Busch suffered mechanical problems and Christopher Bell was collected in an accident) and DiBenedetto has a lot of momentum and confidence right now so it wouldn't be a big surprise to me at all.

Canadian Tire Motorsports Park generally produces a wild race each year in the Truck Series. Do you expect a surprise winner in Sunday's second playoff race?

Jim: I don't see this as a surprise, but I definitely could see Brett Moffitt opening the Truck playoffs with two consecutive wins. GMS Racing won this event a year ago with Justin Haley and Moffitt - who is now with GMS - finished third in last year's event.

Nick: The track seems purpose-made for wild finishes and that tight last corner is just too tempting when you're running a close second. We see fireworks almost every year with interesting names going at it for the win. I would not be surprised if we get a shock winner and another shocking finish.

Tim: Who knows. One thing is for sure if tradition is a predictor of this race, the finish will be exciting no matter who wins. I think we could see someone like Johnny Sauter pick up the win as he is not afraid to trade paint with anyone and if he's close to the win this weekend, the two trucks (or more) going for the win in the final turn are almost guaranteed to trade some paint and bend up some fenders.