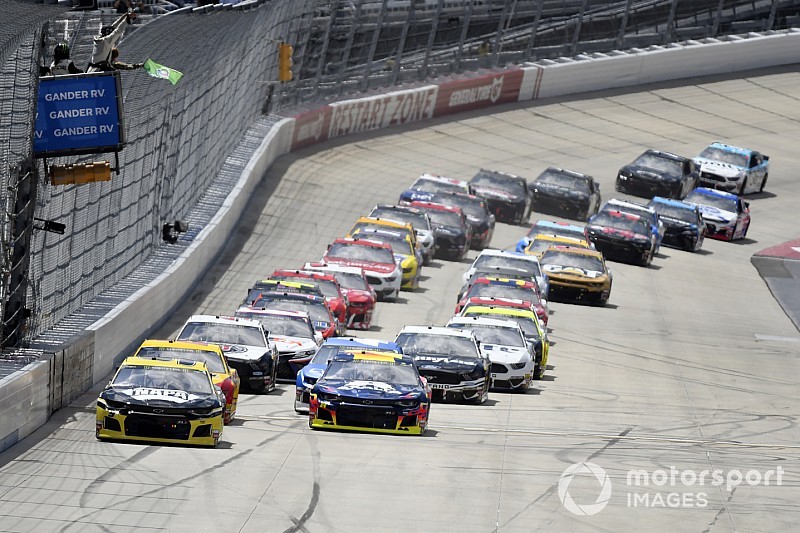 On this week's NASCAR Roundtable, we discuss JGR's winning ways, how the aero package can be improved after Dover and what to expect at Kansas speedway.

Dover was another race where we saw a limited number of cautions and drivers able to pull the cars back after getting sideways. Do you think the new rules package is giving the cars too much downforce?

Jim Utter: Well, there is certainly more downforce than last season. But the previous three seasons, NASCAR had taken downforce away from the cars and there was no corresponding increase in cautions. I wouldn't know how to judge whether someone made a good save because of their talent or because the car is easier to drive. Other than wanting the cars to have some common elements to them at every race, I never understood why NASCAR decided to utilize any form of the aero package at tracks less than 1.5-miles in length. Most complaints about the quality of racing have always been directed at intermediate tracks.

Nick DeGroot: The cars are so planted to the ground that this is no surprise. It's not just about the lack of cautions, but the cars don't seem to be on the ragged edge anymore. We don't want it to become slot car racing. NASCAR should work to get the cars back off the ground and I believe you'd see an immediate increase in the on-track action.

Tim Southers: I don’t know if more downforce is to blame or not but it did appear that the drivers have adapted to the new package pretty well. I also think the talent level of the drivers has something to do with the limited cautions.

Joe Gibbs Racing has won seven of the first 11 Cup Series races this season with three of their four drivers already scoring at least two wins. Do you see Erik Jones winning anytime soon for JGR?

Jim: I have little doubt Erik Jones will end up in Victory Lane this season and likely more than once. It took a little time for Martin Truex Jr. to get on the same level as Denny Hamlin and Kyle Busch and he's now won two of the past three races. Sooner rather than later I see Jones and his No. 20 Toyota team doing the same thing.

Nick: Erik Jones can reach Victory Lane, but he needs to do it this season. His lone victory so far came at Daytona so we need to see that No. 20 start contending for wins at other tracks, which I believe he is capable of doing but that team seems to be missing a little something right now.

Tim: I agree in that I think Jones will get at least one win this season. They seem to have things in order at Joe Gibbs Racing and Jones is too talented not to get a win or two before the season is over.

Kansas Speedway hosts the Cup Series this Saturday night. Kevin Harvick won this race last year. Will Kevin Harvick be able to capture his first win of the season this weekend or is it more likely Chase Elliott follows up his win there last fall with another checkered flag?

Jim: While Harvick has shown speed and consistently good finishes this season, he still isn't leading a lot of laps, which typically is a good indicator someone is in position to challenge for wins. Right now, I think Elliott has a better chance to win this weekend than Harvick. But I do suspect Harvick and his No. 4 team will find that missing ingredient soon and when he does, look out.

Nick: I don't think Harvick will get the win. Stewart-Haas Racing has been strong this year, but they are just a step behind in some areas. I would put my money on JGR getting another win honestly. Martin Truex Jr. is just now hitting his stride and Kyle Busch already has three wins this season.

Tim: While it clearly appears Elliott and his team have their No. 9 Chevy figured out with a win and top-five finish in the past two races, I think Harvick is more than capable of winning this weekend in Kansas. I must say the biggest surprise for me this season is that no one from Stewart Haas Racing has won a Cup race yet this year. I think Harvick can do it this weekend, but he’ll obviously have to outperform several drivers - including a suddenly hot Elliott - to do it.

Johnny Sauter scored his first win after rejoining ThorSport last weekend at Dover. Do you think he can make it two wins in a row this weekend at Kansas or will someone else prevail Friday night?

Jim: Sauter is certainly in a good position to pick up a second consecutive win but I have a feeling the Kyle Busch Motorsports entries will be strong at Kansas this weekend and I would not be surprised to see Harrison Burton picked up his first career win.

Nick: Sauter is motivated, I think that post-race interview showed that. His record as Sauter is impressive as well with the highest average finish among active drivers but it's about time Brett Moffitt broke through and got his first win of the year. The reigning series champion has four top-fives in the first six races, but no wins yet. Kansas might just be the place to end that, albeit short drought.

Tim: I think all Sauter needed was that first win back with Thorsport to take off and I could see him not only winning in Kansas, but also at Charlotte in two weeks. I agree with Jim that the KBM trucks will be fast, but I think Sauter’s experience will make the difference.