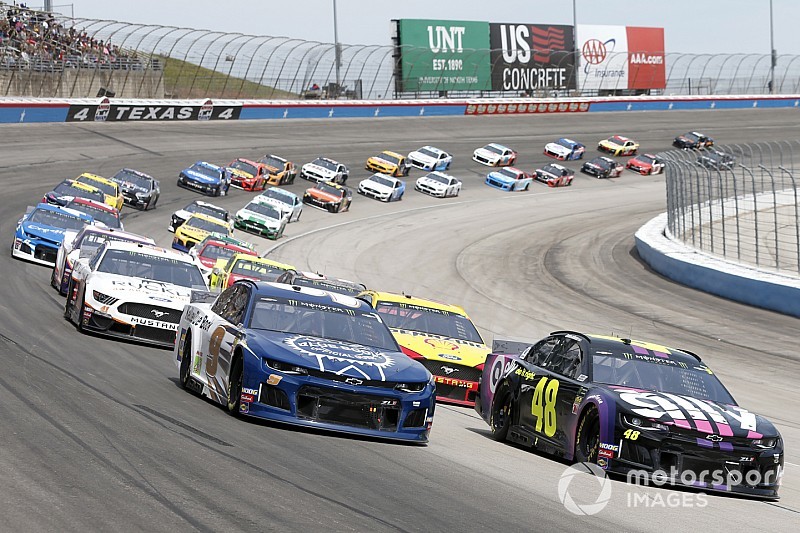 Chevrolet enjoyed its strongest performance of the year last week at Texas Motor Speedway. Could be a sign of a huge turnaround for the Camaro and specifically, Jimmie Johnson in 2019?

Jimmie Johnson scored his first top-five of the season last weekend and was consistently fast throughout the entire weekend. Do you think he's turning the corner to get out of his extended slump?

Jim Utter: From start to finish, Sunday was one of the best race weekends Jimmie Johnson has had in a long time. And more importantly, that improvement could be seen among all of Hendrick Motorsports. Until now, only Chase Elliott seemed to be able to find himself in the hunt for race weekends but on Sunday, Johnson, Elliott and William Byron were in the mix. Had Alex Bowman not had to start from the rear of the field for going to a backup car, I suspect his day would have been a lot better, too. The weeks ahead will provide the final say, but the No. 48 appears back on track.

Nick DeGroot: Texas was telling for the No. 48 because they just didn't put together a good race, they were solid the entire weekend. And in the race, they would get back in the pack and still find their way back towards the front. That is the No. 48 team I remember and even if they struggle at Bristol, there's no doubt they hit on something at Texas. Their slump may very well be coming to an end.

Tim Southers: I don’t know if Johnson is back all the way to contending for wins on a weekly basis just yet, but last weekend could be the beginning of a turnaround for him and the entire Hendrick Motorsports teams. Chase Elliott appeared to be the only driver who was running consistently up front, but now it appears that all four teams have shown improvement. I don’t know if he’s turned the corner completely but we might look back at Texas Motor Speedway as the weekend that turned Johnson’s season around.

Do you think NASCAR is getting too picky with the uncontrolled tire rule?

Jim: No and here's why - the point of NASCAR's rules on uncontrolled tires is not to wait until tires are rolling out of pit boxes and onto pit road before calling penalties. Their rules are to prevent tires from doing that to begin with and despite the grumblings about them, they have worked virtually to perfection. Can anyone remember the last time a tire went rolling down pit road or in another competitor's pit box? NASCAR in this case has actually been very preventive rather than reactive and now it's getting criticized for that, too.

Nick: Yes it is. Now let me preface this by saying that in the calls I've seen NASCAR make, they were justified based on the rule -- but the rule shouldn't exist in its current form. That's where my issue lies. I do not like the idea of a preemptive penalty and that's what it feels like to me. If a tire goes outside the box, that should be the penalty. A crew member not staying within arm's reach of a tire at all times is getting too much. It used to be a penalty because you actually lost control of the tire and it became a hazard on pit road. Penalizing teams just because it's not within a certain distance of a crew member, even if it isn't going anywhere seems ridiculous. And just to try to preemptively stop tires from leaving the pit box? Not a fan of that.

Tim: I must agree with Jim’s take on this issue. If NASCAR didn’t police things like they do and looked the other way, the first time a tire went rolling down pit road and was hit by another car or worse knocked into other crew members injuring them, people would be talking about how NASCAR doesn’t enforce its own rules.

What kind of race do you expect this weekend at Bristol Motor Speedway?

Jim: Given some of what we saw at Martinsville, I would think speeds would be up some with the higher downforce but a lot of how the race will play out will be determined by how willing drivers are to explore driving on multiple lanes. And how comfortable drivers are doing that generally comes from how well the PJ1 track compound works over the course of the weekend. It will be warmer this weekend, which I think will make for better racing.

Nick: Martinsville surprised me with its lack of action we'd associate with a short track, but I expect Bristol to be different. Modern Bristol allows drivers to utilize more than one lane to battle and with those tight quarters, sparks will fly as they always seem to do at the half-mile.

Tim: Judging by what Brad Keselowski said after his win at Martinsville Speedway two weeks ago we could be in for an exciting race this Sunday. While I know there are fans who haven’t enjoyed the racing at Bristol recently, but I love watching the two and three-wide racing throughout the field. As for this weekend with the new downforce rules, Keselowski predicts the cars and drivers both will be challenged this weekend. I expect and exciting event.

How important was it for Chevrolet to have a handful of drivers in the top-10 this past weekend for their best overall showing of the season?

Jim: Until Sunday, Chevrolet's best hopes most weekends appeared to lie with Kurt Busch and Chase Elliott. If Hendrick Motorsports continues its turnaround as a whole, it's likely more and more Chevy drivers will enter into the mix for race wins. Richard Childress Racing continues to show raw speed and hopefully will be able to capitalize on it sooner rather than later.

Nick: Chevrolet needed that shot in the arm. It's proof that they can bridge the gap to their competitors and that they are making some headway. But they must build on this, it can't just be a one-off or they risk another year of falling behind their rivals.

Tim: I think it was very important for the brand. While Kurt Busch has been the most consistent Chevy driver overall so far this season, if Hendrick Motorsports and Richard Childress Racing can put some strong finishes together after showing speed in qualifying I think we’ll see Chevrolets battling for wins this season.