Roundtable: The racing was closer at Michigan, but was it better? 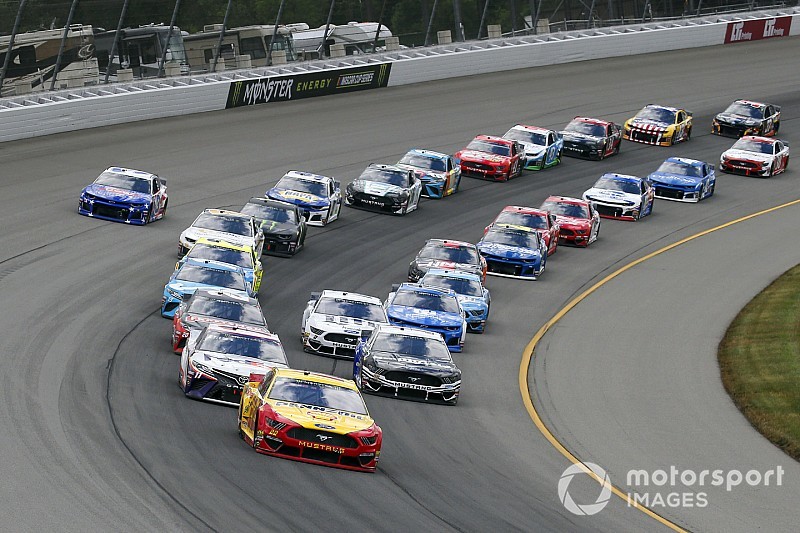 The aero package at Michigan, primetime races and standalone races for the NASCAR Xfinity and Truck Series -- all that and more on this week's edition of the NASCAR Roundtable.

Also, will anyone move up to challenge the clear favorites - Christopher Bell, Cole Custer, Tyler Reddick - to claim the 2019 NASCAR Xfinity Series title? That was discussed in last week's edition of the NASCAR Roundtable.

Passing the leader seemed difficult without help. Was that just because Joey Logano, who led 163 laps was that strong or would you blame it on the package?

Jim: Passing the leader isn't supposed to be easy. The leader is generally the leader for a reason - they are faster than everyone else. I can tell you one guy who didn't have a problem passing and that was Joey Logano. He took back the lead each and every time he lost it. I think the overriding frustration of most drivers lies in the fact they don't have the speed to match the Gibbs and Penkse cars to take the lead and keep it. Those two organizations clearly got off to a better start this year in finding speed with this package.

Nick: I didn't like that passing was so difficult without help. If you weren't getting a push, you couldn't really make a move on your own to pass the leader. Yes, the racing was closer, but that doesn't mean the racing for the lead was better. The restarts put on a show as usual, but having the top three run bumper-to-bumper in front of a pack is not better than two cars taking off and battling amongst themselves, swapping the lead every lap. Yes, Logano's strength out front made it even more difficult for challengers, but we saw the same issue at Pocono. I know it looked better than previous years and the stats back it up, but it wasn't what I was looking for in a race.

Tim: I think it was mostly that Joey Logano was fast all day and Kevin Harvick had issues throughout the first two stages with his car. I honestly feel that fans’ expectations are a little unrealistic to expect cars to finish side by side each week. I understand the driver’s frustration at times feeling like they are limited in what they can do with their car in this package but that’s why I also feel it’s still a work in progress.

Do you think it's time to look at a scheduled primetime race during a weeknight?

Jim: Sure, if we don't want any fans in attendance. All I heard was Monday's race was going to be a huge success on TV because it would end in prime time. It drew a 1.0 rating. Even in 2019 most fans who attend races in person come from outside the city in which the race is held. If TV wants to foot the bill to hold a midweek race, then let them foot the bill to the track that does it. I personally don't see the point of racing in front of empty grandstands in hopes of gaining a TV audience.

Nick: As Jim pointed out, it may help TV viewership, but it won't fill those grandstands. There are a lot of fans who can only attend races because they are on weekends. Not I wouldn't be opposed to one or two mid-week primetime races, but it should never become the norm.

Tim: If we get to a point to where everyone is willing to accept a made-for-tv deal then go for it. I think the only week/weekend that would make sense would be to maybe try and run the Daytona July race on a July 4 that falls midweek and then maybe run up to Atlanta and run that weekend as well. It’s close enough to the majority of teams to make sense logistically and Atlant deserves a warm-weather date. Plus diehard fans could have two relatively close races to attend in the same week if they choose.

Christopher Bell, Cole Custer and Tyler Reddick have clearly separated themselves from the rest of the field in the Xfinity Series. Do you see anyone else right now who could move up to their level?

Jim: It would be difficult for another driver to match that level of performance this late into the season, but if it were to happen, my guess is it would come from a driver at JR Motorsports - Justin Allgaier, Noah Gragson or Michael Annett. Annett has already won one race and has been solid in several others. Both Allgaier and Gragson have shown the speed to contend for wins but need to have a "clean race" with mistakes in order to capitalize. Bell, Custer and Reddick aren't going to make it easy for anyone else to join the party.

Nick: Justin Allgaier is the next-best bet. He is a veteran, won multiple races this year and has been near the front again this year. He just hasn't broken into the win column yet, but it will come. Still, that No. 7 team has some work to do if they want to go head-to-head with the 'Big 3' dominating the series right now.

Tim: I have to say I agree with Jim on the obvious contenders to the ‘Big 3’ right now in the Xfinity Series. The JR Motorsports drivers have the experience in Allgaier and Annett, plus Gragson has shown good speed at times although he is young. The only other ‘sleeper’ I might consider would be Austin Cindric who also has a fast car.

The Xfinity and Truck Series will have their own events at Iowa Speedway this weekend. Do you think those series should have more standalone events away from the Cup Series?

Jim: It would be a great idea but I doubt it's feasible. Remember, both series used to have several standalone events and one of the reasons they disappeared is because it was not financially beneficial for the tracks, which had to pay the sanctioning fees with smaller crowds. Combining events into single weekends across two or three series was a cost-saving venture for tracks and TV networks. I think the are places that could work such as a return to Montreal, which typically drew large crowds of its standalone Xfinity races.

Nick: That's how it was originally supposed to be. I really wish the Xfinity and Truck Series got some of their identity back and didn't just follow Cup around for most of the season. We certainly need more events unique to those divisions.

Tim: I think it would work but it would have to be at locations that could afford it. I agree with Jim that Montreal is a place to consider if the right promoter gets behind it. I also think two other places could pop up for Xfinity and Truck standalone events. Canadian Tire Motorsport Park already hosts a truck race, I feel the support might be there in that market (just outside of Toronto) to support an Xfinity race someday. I also think if Jukasa Motor Speedway keeps growing after it’s reopening, a truck race would make sense there too.