Roundtable: Expect a wild race at Pocono this weekend 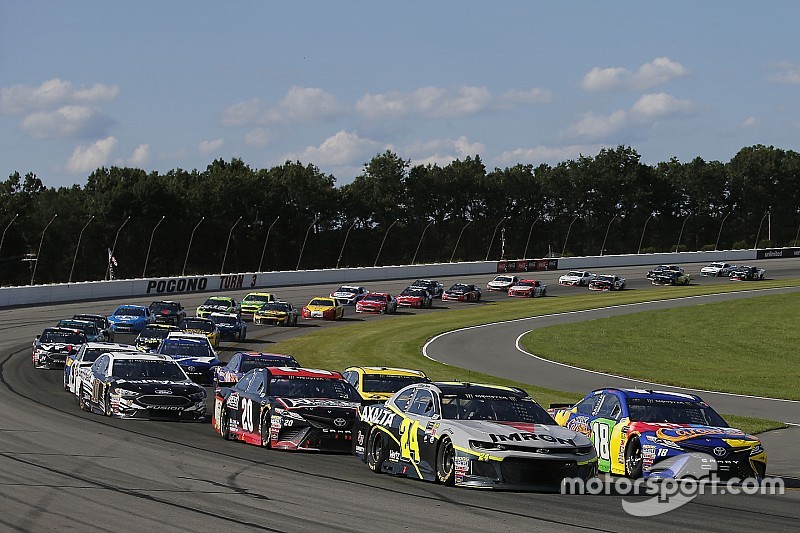 After a wild finish in Charlotte last weekend, the NASCAR team predicts the Cup Series race at Pocono could be wild this weekend.

No NASCAR drivers did the double this year at the Indianapolis 500 and Coke 600. Should the two series work to make it more logistically possible for a driver to pull it off or leave the schedule as is?

Jim: I don't think it's that big a deal or a big payoff. At the end of the day, the Indy 500 and Coke 600 are signature events for each respective series. I honestly don't think having drivers attempting to complete the "double" raises the stature of either event. Is it cool? Of course. But should you buck the Memorial Day weekend traditional dates to make it happen? No way.

Nick: I love it when any driver attempts the double and it brings more exposure for both series when stars crossover, but I prefer the schedule as is. It's possible to do with Kurt Busch pulling it off a few years back and moving the time between the events around won't change much about participation.

Tim: I think it would be good from a marketing standpoint for both series to have a driver or two attempt it, but I honestly don’t see many drivers out there today who would be interested in doing the ‘double’. I’ve heard there are rumors of switching race days to make this happen and I think that would be a mistake.

Despite a lack of cautions most of the season, which has been attributed to this aero package, there were 16 (including three stage breaks) in the Coke 600. Why were there more incidents, especially tire failures?

Jim: First, I don't think this aero package is the sole reason for less cautions. The Cup series in particular has seen far fewer cautions per race in recent years long before the new aero package came along. Much of the issue in the Coke 600 was from teams trying to get an advantage on more grip by lowering air pressure in the right-front tire - and they paid a heavy price. Cole Pearn, Martin Truex Jr.'s crew chief, admitted as much after the race and said they took Goodyear's advice and raised their air pressures following his early-race incident.

Nick: The tire issues come down to the teams and what they're doing with air pressures, but there were certainly more incidents in this race than previous this year. The package has made these cars more planted to the ground, harder to spin out on their own and of you notice, the incidents Sunday began with contact between cars. So I wouldn't dwell too much on it, there was just a bit more action this particular race which led to more incidents.

Tim: I think this was a result of teams trying setups and air pressures due to the known temperature sensitivities of Charlotte Motor Speedway and as we saw several teams paid dearly for it. I don’t like to see a lot of caution flags in a race, but the cautions help set up some exciting restarts and a wild finish of the race that made it one of the most entertaining races from start to finish all season long.

Martin Truex Jr. has now matched teammate Kyle Busch with three wins this season. Both are title threats, but which driver do you expect to have a more successful regular season leading up to the playoffs?

Jim: At the moment, it appears Truex has all the momentum, as he's won three of the past five points races in the Cup series. Clearly, he and Pearn have figured out what they need to be successful with this aero package and have been able to take full advantage. On the opposite side of the spectrum, while he seemed unstoppable early in the year, Kyle Busch seems to have lost something in recent weeks. The No. 18 team really appears to be struggling to get the handling right on their car, which seems a little out of character after such a strong start.

Nick: It appears the Truex/Pearn duo are back to their old ways and have quickly caught up with teammate Kyle Busch. If they can keep this up, then the No. 19 will likely be the team to beat as they were during  their 2017 title run with Furniture Row. Kyle has more stage points at the moment, but Truex has all the momentum.

Tim: If I would have been asked this question a month ago I would have said Kyle Busch hands down. After Charlotte though and listening to both drivers on the scanner during the weekend, I would have to say Martin Truex Jr. would have the advantage for more wins as of today. I though Kyle Busch was on the way to 10 wins this season and I wrote that in an earlier Roundtable, but after hearing him and the team struggle trying to figure their car out during the 600, I’m not so sure.

How do you think the racing will be at Pocono Raceway with the new rules package?

Jim: One word: Crazy. If you can have three- and four-wide racing at Charlotte Motor Speedway, then I can't even imagine what is possible at Pocono, which features the longest straightaway in the series. Restarts have been on the wild side at Pocono in recent years regardless and this package should push the boundaries even further. I predict a game of chicken entering Turn 1 on who will lift.

Tim: If the Charlotte race was any indication (four-side racing and a pass for the eventual race win) I can’t imagine what Pocono will look like. The front stretch action at Pocono should be entertaining. The package and how drivers are able to go where it seems they never have been able to go before should only make Pocono one of the ‘must-see’ races of the regular season.