“It feels great,” said Kenseth. “We even went overtime a little bit since we didn’t quite go the whole distance the first time we won it. We had a really fast car all day and overcame a lot of adversity and problems with the car that we figured out. We had a great pit stop at the end that put us into position. It feels great. I wasn’t expecting to win when I woke up this morning so it feels good to be sitting here.”

It is very fitting that Matt won the 300th victory that we have had since we started in 1988...

Kenseth and Biffle combined to lead 83 of 200 laps in the race, with Kenseth taking the lead for the final time with 37 laps remaining and holding the point until the race’s conclusion with a green-white-checkered finish. With the victory, Roush Fenway becomes the first team in NASCAR history to win 300 races.

“This is a special night,” said team co-owner Jack Roush. “It feels great. It is very fitting that Matt won the 300th victory that we have had since we started in 1988 and (crew chief) Jimmy Fennig has been with us for most of the time and Matt has been here most of the time as well. It is great to celebrate our 300th win here with the 54th Daytona 500. This is Matt’s second 500 win and that makes it special as well.”

The victory concludes a dominating performance by the Roush Fenway Fords at Daytona Speedweeks that saw the team lead several practice sessions, sweep the front row on pole day and win the second Gatorade Duel qualifying race on Thursday with Kenseth. Kenseth became the first driver to win both a duel race and the 500 since 2004. It is Kenseth’s second Daytona 500 win in the last four seasons. 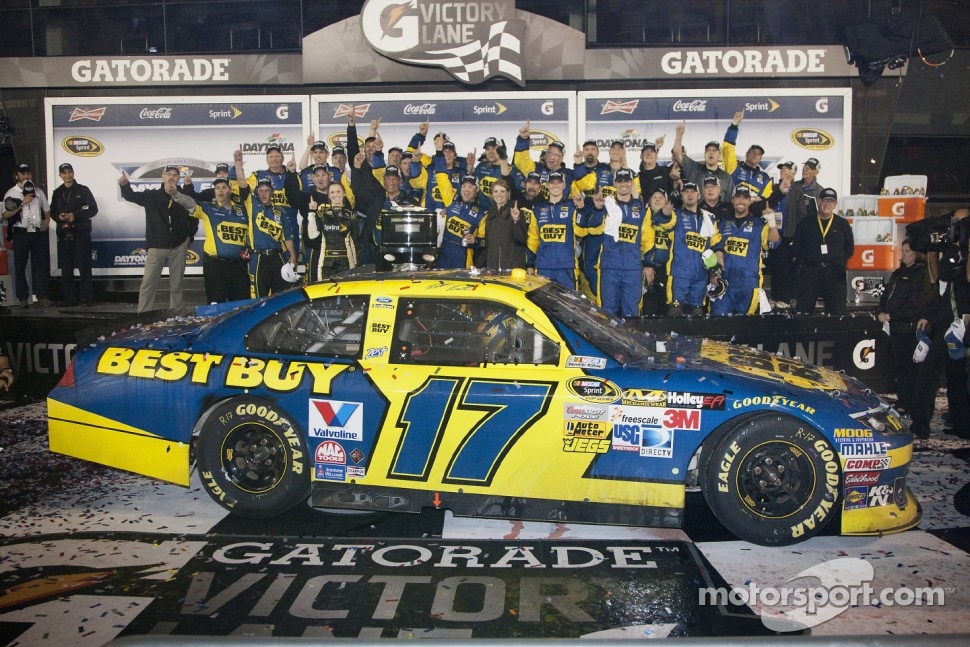 Chase Elliott after runner-up finish at Vegas: ‘Not quite close enough’

Royal flush for Denny Hamlin at Vegas; advances to Round of 8 with win

Recap: Denny Hamlin with the winning hand at Las Vegas