Kyle Busch on Turn 1 pile-up: "I guess all of us are just stupid" 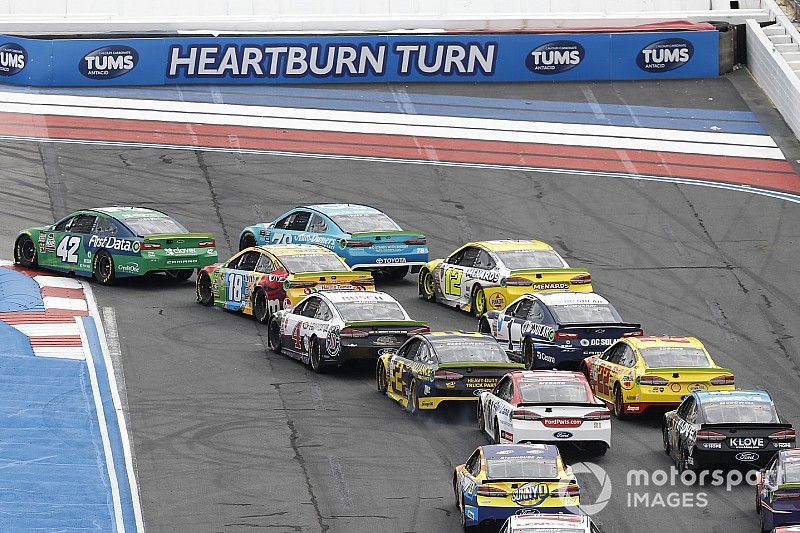 On a restart with just six laps to go at the Charlotte Motor Speedway, chaos ensued as the field filed down into Turn 1.

The corner, appropriately nicknamed the 'Heartburn Turn', caught out several drivers as they overdrove the left-hander.

Race leader Brad Keselowski was the first to blow the entry, locking up his brakes and skidding directly into the tire barrier ahead. As Joey Logano's crew chief Todd Gordon put it, "Brad led the army off the cliff."

Kyle Larson, Kyle Busch, Paul Menard and William Byron all followed him into the barrier, destroying their race cars. Ryan Blaney, who went on to win the race in a thrilling finish, narrowly avoided the same fate as he overcooked the corner as well, but squeezed through the carnage mostly unscathed.

Busch, Keselowski, Menard, Byron, Bayne and Wallace were all unable to continue as the race was red-flagged for cleanup. Larson soldiered on and escaped elimination in spectacular fashion, but with a heavily damaged race car.

“We’d just been there the longest we had been on tires and I guess all of us are just stupid and don’t know where to brake for the corner considering what our tires look like and so we just all drove off into a 90-degree wall for something to do because we had nothing else better to do," Busch said after emerging from the infield care center.

"That kind of sucked, but guess it’s a good thing it didn’t matter for us.”

Per Busch's assessment, it was a perfect storm with a old tires on a late-race restart barreling into a 90-degree corner trying to get everything they could.

"We’re just all restarting in a restart zone trying to build as much speed as we can to go off into a corner that’s a 90-degree corner that’s really slick already and try to race through there two-wide on 20-lap old tires.”

Keselowski, who like Busch was already locked into the next round of the playoffs, seemed baffled by the incident.

"I don’t know. I was just asking Ricky (Stenhouse Jr., who also crashed in Turn 1 just before that incident). I don’t know.  The whole field went down into turn one it looked like and we all went straight. I don’t know. Maybe we all overdrove it.  Maybe the track had something on it. I don’t know.

"I got in the corner. I didn’t feel like I got in it, I got in hard, but not like ridiculously hard and it just locked up.  I couldn’t get the tire to unlock, so I felt really, really dumb when I hit the wall and then I got back in the care center and saw the replay and saw everybody kind of did the same thing.  I don’t know.  It’s frustrating, but I really have to give a lot of credit to Paul Wolfe and the team on this Truck Alliance Parts Ford. This car was a rocket. I wrecked the car in practice and we unloaded this car just for the race and it was screaming fast. I thought we were gonna win today. It just didn’t come together.”

SMI's Marcus Smith on Roval: "I feel like this is unique to Charlotte"