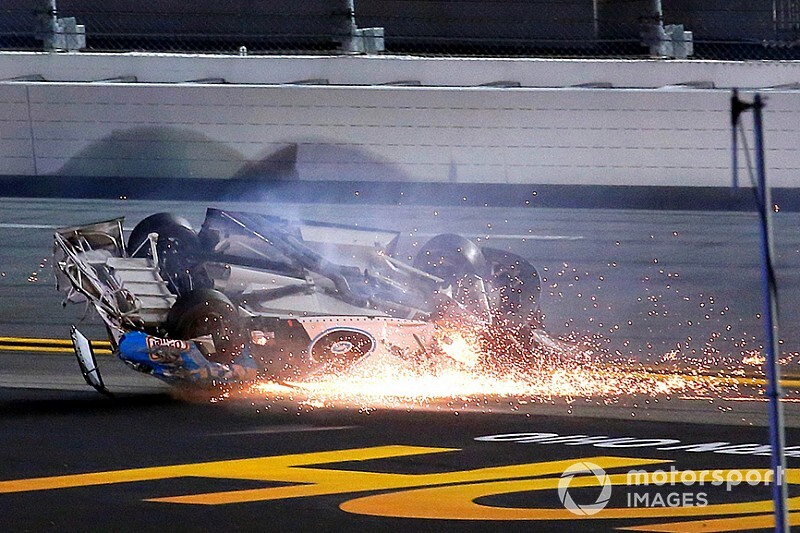 Shortly after 10 p.m. ET, Steve O’Donnell, NASCAR’s executive vice president and chief racing development officer, said Newman, 42, had been transported to Halifax Medical Center in Daytona Beach, Fla., and was in serious but stable condition. His injuries were described as “non-life-threatening.”

On the final lap of the second two-lap overtime, Ryan Blaney had pushed Newman into the lead past Denny Hamlin. Hamlin then dropped in behind Blaney and tried to get around him.

While battling Hamlin, Blaney’s No. 12 darted to the left and Newman moved in front of him to block his advance. The two made contact and Newman’s No. 6 Ford cut sharply to the right into the wall and then went airborne.

As his car dropped back to the track surface, it was hit in the driver’s side door by the oncoming car of Corey LaJoie, which sent Newman’s car skidding on its roof until coming to a stop near the exit of pit stop with flames coming from its underbelly. Safety crews immediately descended on the car to extinguish the fire.

Crews then worked to turn the car upright but before extracting Newman from the car, they erected black tarps around it and media members were asked to leave pit road. Newman was then transported by ambulance to a local hospital.

Hamlin and Blaney drag-raced to the finish line for the win, with Hamlin edging out Blaney for his third Daytona 500 win and second consecutive.

The crowd seemed eerily muted as Hamlin did a celebratory burnout while safety crews were still attending to Newman’s car. When Hamlin emerged from his No. 11 Toyota on the frontstretch, he received a chorus of boos.

“We didn’t know until Victory Lane,”' Gibbs said. “I know that for a lot of us, participating in sports and being in things where there are some risks, in a way, that’s what they get excited about.

“Racing, we know what can happen, we just dream it doesn’t happen. We are all just praying now for the outcome on this.”

As a NASCAR driver, Newman has been a frequent critic of the racing at the superspeedways of Daytona and Talladega and just last June had vented his frustration again when Kyle Larson’s car got airborne during an incident earlier in the season at Talladega.

Newman has had one of most diverse racing backgrounds among NASCAR drivers.

He made his racing debut in 1993 in the United Midget Auto Racing Association and the All-American Midget Series, winning both the rookie of the year title and the championship. His 100 feature wins and two titles have him in the Quarter Midget Hall of Fame.

Moving to USAC in 1995, he won rookie honors again in both the Midget Series and the Silver Crown in 1996. In 1999, he was the first driver to win in all three divisions while being the Silver Bullet Series champion. He made his first stock car start in 1997 at age 19 in the ARCA series.