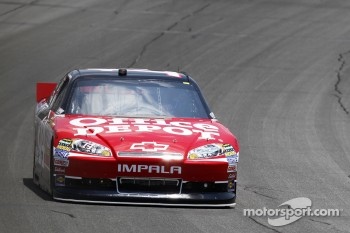 “The car felt really good,” Newman said. “It wasn’t a perfect, perfect lap, but the car has a lot of speed.”

Newman came into the weekend already the all-time pole winner at NHMS. His lap on Friday handed him his fifth-career pole at the track.

Brad Keselowski, in the No. 2 Penske Racing Dodge, was the first driver of the afternoon to top the old track qualifying record, which just happened to be his own. Keselowski’s lap time of 28.392 seconds put him on the provisional pole for a time.

Even though he sat on the provisional pole for a while, Reutimann didn’t think his car felt all that great during his qualifying laps.

“It didn’t feel that good at all,” Reutimann said. “It ended up being okay there.”

Both Keselowski and Reutimann were shuffled down the starting grid slightly near the end of the qualifying session. Reutimann will start third on Sunday, while Keselowski will start from the third row in the fifth position.

Newman’s Stewart-Haas Racing teammate and car owner, Tony Stewart, in the No. 14 Chevrolet, posted a qualifying lap at 28.200 seconds to claim the other front row starting spot.

“We have a great group of guys at SHR,” Stewart said of his organization claiming both front row starting spots. “We’ve got great engines and great chassis from Hendrick, and I’m just really proud of our organization.” 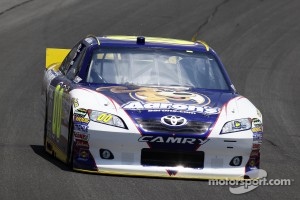 Keselowski’s Penske Racing teammate, Kurt Busch in the No. 22 Dodge, turned a lap at 28.352 seconds to claim the fourth starting spot.

Chevrolet, Dodge and Toyota shut Ford out of the top-10 spots on the starting grid. The highest-qualifying Ford was the No. 99 Roush Fenway Racing entry of Carl Edwards. Edwards will start 15th on Sunday after posting a lap time of 28.550 seconds.

Forty-six cars made qualifying attempts, hoping to claim one of the 43 starting spots. Failing to make the race were Tony Raines in the No. 37 Front Row Motorsports Ford, Scott Riggs in the No. 81 Whitney’sCollision.com Chevrolet and Dennis Setzer in the No. 92 K Automotive Chevrolet.

Scott Wimmer, qualifying the No. 7 Robby Gordon Motorsports Dodge, actually turned in the slowest qualifying time of 29.694 seconds, but the No. 7 car will start on Sunday by virtue of owner points. Car owner, Robby Gordon, is expected to drive the car in the race.