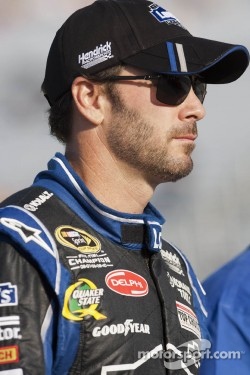 “Chicagoland Speedway is a great place to start the Chase. Our Chevrolet teams have been successful at this track. A win would be a great way to start the Chase and build some momentum for the next nine races.

“There are always exciting finishes at this track, which is unique with its own set of challenges. This tri-oval configuration has a lot of downforce and is quite similar to other 1.5-mile tracks with the exception of the back straightaway, which isn’t straight. It has a curve in it. It's a fast, wide-open track, which requires a lot more throttle and can be hard on engines.

“The Chase will be challenging for all the teams with an assortment of short tracks, intermediate tracks, and a superspeedway, but that's what makes it interesting and fun. Like the song, ‘Let's Get This Party Started’; we are ready!”

TEAM CHEVY FROM THE DRIVER’S SEAT:

JIMMIE JOHNSON, NO. 48 LOWE’S/KOBALT TOOLS CHEVROLET – 2nd IN STANDINGS: “I always like going to Chicago. I think the city is great and I know there are a lot of race fans in the area. We’ve never won there, which is kind of frustrating especially because we’ve been close so many times. It’s also Chad’s home track. We really want to give him a win there. We’ve won in California several times and it’s time he gets to experience winning at home. I feel like we owe him one and we’re going to do everything we can to give him that opportunity this weekend.”

TONY STEWART, NO. 14 OFFICE DEPOT/MOBIL 1 CHEVROLET – 3rd IN STANDINGS: “I think I’ve always been good there. You look at the past and we’ve had some weird events. On Fridays, I’ve had two events where I’ve crashed in practice. The first time (2004) Hermie Sadler blew a motor and, before the caution came out, I crashed in his oil and went to the hospital and I missed the rest of the day. And then, the very next year, I blew a tire in practice and J.J. Yeley had to qualify for me. It’s one of those places where, as long as I get through Friday, I feel like we’ve got a shot at it. But I don’t watch the stats very much. You just take it week to week. Technology in this sport changes so fast. What was good the last time you were there doesn’t mean it’s going to be good the second time around. You constantly have to work. You’ve got to keep pushing the envelope. It’s a place I like. This place is really getting racy as far as finally being able to move around and change lines and run anywhere from the bottom to the top. It’s a fun track because of that.”

DALE EARNHARDT, JR., NO. 88 AMP ENERGY/7-ELEVEN/NATIONAL GUARD CHEVROLET – 7th IN STANDINGS: “I feel we've got a good shot at it. We've been consistent all year long, and I think our chances are as good as they have ever been for me. I had a pretty good shot at it back in '04, but I think this year is a better opportunity. We've got the team, and we’re poised to make a run at it. You've got to put the guys that have won the championship at the top of the list as the favorites but we are in the conversation, and we're going to work hard to still be in that conversation at Homestead (Fla.)."

KEVIN HARVICK, NO. 29 BUDWEISER DESIGNATE A DRIVER CHEVROLET – 9th IN STANDINGS: “Well I feel like even though the year hasn’t gone the way we wanted it to, at the beginning we ran decent. We ran well at Dover (International Speedway) and decent at Loudon (New Hampshire Motor Speedway) and Charlotte (Motor Speedway). There are a lot of tracks in the Chase that we have a pretty good notebook for. Hopefully when we apply some of the things that we feel like we needed to do different over the last few weeks, everything will keep clicking and we’ll keep moving forward. Everybody’s confidence is up right now and we know that things are getting back to the way they need to be.”

KASEY KAHNE, NO. 5 FARMERS INSURANCE CHEVROLET – 11th IN STANDINGS: “I enjoy going to Chicago. We haven’t always run our best there, but we’ve surprised ourselves with good finishes at some other tracks this year. It’s going to be important to come out of the gate strong in the first Chase race. We’re starting without bonus points, so we want to make up some ground this weekend.”

JEFF GORDON, NO. 24 DUPONT CHEVROLET – 12th IN STANDINGS: "It was a great fight we had at Richmond and I am so pumped heading into Chicago and the rest of the Chase. There were a number of times this year when we had strong performances but didn't have the results to go with it. We now have 10 races to pair good runs with good results.

“At Richmond, the determination that (crew chief) Alan Gustafson and this team showed was incredible. Anything is possible from this group, including a championship. We finally started putting together some results, but it still seemed like every time we had a great finish, something would happen that would break our momentum. We have three top-three finishes in a row that we're hoping to build on in Chicago.

"You want to come out of the gate strong and get the best possible result you can. If that's a win, great, if that's fifth, great. A lot can happen during the Chase. To me, 10 weeks is a lot of racing. More than a lot of people think."

RYAN NEWMAN, NO. 39 HAAS AUTOMATION CHEVROLET – 16th IN STANDINGS: “Even though it’s a ‘cookie cutter’ racetrack, I look forward to it because of the 18-degree banking and the fact that it is kind of unique. Chicago is really a big circle. It’s always a track that has been rewarding if you are good in the corners because even the back straightaway has a kink in it. You have to carry a lot of momentum there. I always say I’m a fan of the banked racetracks and this is another track I have enjoyed racing, and it’s a track that has gotten better each year we’ve gone there. I’ve been fortunate enough to win there and, the past few years, we’ve had some solid top-10 runs there. This weekend, we need to have another one of those top-10 runs there. It’s really important for me and the team that we have a good run this weekend at Chicago so we can continue our momentum from a good run at Richmond and keep trying to make our way up in points so that we can finish 13th in the final standings.”

PAUL MENARD, NO. 27 MENARDS/LIBMAN CHEVROLET – 17th IN STANDINGS: “The groove at Chicagoland (Speedway) is a little wider right now than it has been in years past. It seems like it keeps getting wider. Kansas Speedway was recently repaved, so we don’t know how that will race now. The old Kansas and Chicagoland were very similar. There’s a little more banking and it’s a little faster at Chicagoland. The backstretch there is slightly curved, but it doesn’t affect the car a lot. You’re turning left, but you’re not turning left much. It’s still a straightaway.”

JEFF BURTON, NO. 31 CATERPILLAR CHEVROLET – 19th IN STANDINGS: “Chicagoland Speedway is an up and down track for us. We’ve run well there, but never great. We’ve struggled at 1.5-mile tracks throughout the season, but have made gains and had a good run at Atlanta (Motor Speedway). We are definitely headed in the right direction. While it isn’t our best track, we need to go in this weekend and work on improving our 1.5-mile program.”

JAMIE MCMURRAY, NO. 1 MCDONALD’S CHEVROLET – 20th IN STANDINGS: “Chicago is a big weekend for us. We get to do a lot with McDonald’s this weekend with this event being in their backyard. We have had good cars at Chicagoland Speedway in the past, so I hope we can continue that this weekend for all the McDonald’s folks that we will have at the track. We sat on the pole and had a top-five finish there in 2010. Last year we had a good car, but lost a motor with about 100 laps to go and didn’t make it to the finish. Hopefully we can build some momentum in these last ten races as we inch closer to the end of the 2012 season.”

JUAN PABLO MONTOYA, NO. 42 TARGET CHEVROLET – 21st IN STANDINGS: “Chicago is interesting because you can run the top, you can run the bottom. There are a lot of grooves and things you can work on. Which is good because you can find a groove that works for the handling of the car. It’s a cool place to go. The Target team should run pretty well there to be honest. We’ve done quite a bit of testing and I feel we’re making progress.”

REGAN SMITH, NO. 78 FURNITURE ROW/FARM AMERICAN CHEVROLET – 23rd IN STANDINGS: "I'm just as excited about heading to Chicagoland Speedway as are the 12 Chase drivers. The reason for the optimism is that we're taking the same Furniture Row/Farm American Chevrolet that we tested with in Kansas a few weeks ago and we were really fast in Kansas, which is also a 1.5-mile track like Chicagoland. When we're competing in the race, I really don't give much thought who the Chase drivers are. They're going to fight for every position and I will do the same. They have to be just as careful out on the track as the non-Chase drivers."

KURT BUSCH, NO. 51 HENDRICKCARS.COM CHEVROLET – 25th IN STANDINGS: “Chicago is a fast, mile-and-a-half track I have always enjoyed racing since I started racing there in my rookie season. The track isn’t as smooth as it used to be – it has some bumps in it – but it’s a place I like. It is another one of those tracks, though, where I just haven’t had the best of luck. An example is the 2002 race. We had a really fast car for that race but, for some reason after the last pit stop, the car just wasn’t handling the same as it had been. We were just way too tight and really couldn’t figure out why. When we got back to the shop and started going over the car, we realized that the radiator pan had come off and that’s like 100 pounds of front downforce. We were going so fast that the car bottomed out and dragged the radiator pan out. It’s just weird stuff like that.”

DAVE BLANEY, NO. 36 TOMMY BALDWIN RACING CHEVROLET – 33rd IN STANDINGS: “I’m looking forward to this weekend. We are running a new chassis we just bought from RCR; so hopefully, we can make a stride forward with that. The Chase starts this weekend too. I like watching to see how it unfolds. I really like the format. The first few weeks each team has a chance to put themselves in the hunt for the title. So, it should be a good weekend.”

DANICA PATRICK, NO. 10 GODADDY.COM CHEVROLET: “To be honest, I feel like the grip levels are sort of similar. At Chicago, you can definitely hustle around there, but it’s a slippery track. I feel like it will translate. Some of the tougher ones are the slippery ones for me, but that was the point. We didn’t pick places like Texas or Vegas where I enjoy hustling around those tracks, we picked the ones that are hard that have day to night transitions and things like that.”