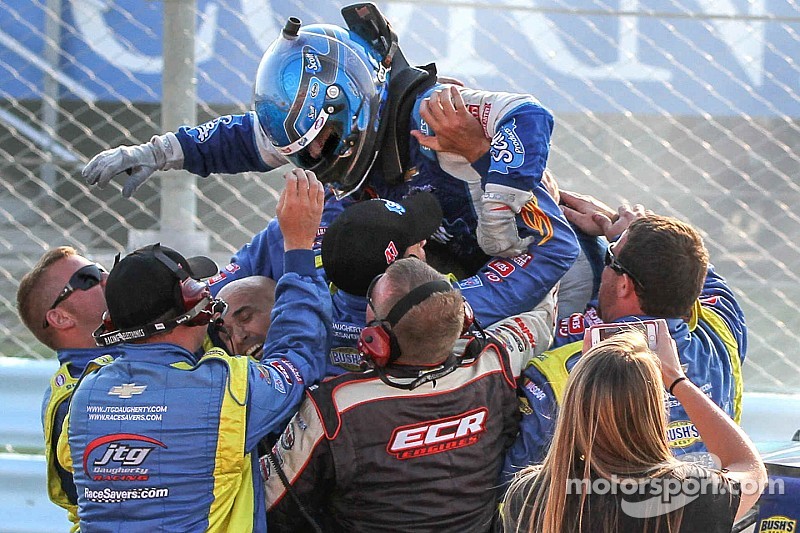 With the exception of AJ Allmendinger finally securing his first win, I’m glad to put Watkins Glen in the rearview mirror.

Just a side note, first: Our innkeeper Bob could not wait to sing Allmendinger’s praises on Monday morning. In this case, he’s a little late to the party.

Bob is an avid Jeff Gordon fan. He was convinced that the No. 24 Chevy would be back in Victory Lane by the end of the race. Had it not been for an electrical issue, Bob might have been right.

But this long-time racing enthusiast – and a Watkins Glen local – brought up two valid points. Marcos Ambrose is one of the greatest talents that NASCAR has ever seen, particularly on a road course. On Sunday, however, Allmendinger was just that much better.

Those of you that have followed my work for some time know I have a fondness for the Dinger. It’s difficult not to be drawn in by his affable demeanor. His father, a hobby racer, named him after A.J. Foyt. Growing up in Los Gatos, Calif., his mother made him decide between new shoes or another set of tires.

Did he really have a choice?

Once he arrived on the NASCAR scene, the party followed. So did the reality of racing at this level. As competitive as open wheel can be, a 38-race schedule can be daunting. Still, Allmendinger hung in there despite poor management and sub-standard equipment at the newly formed Red Bull Racing. What convinced me of his staying power was a test at Phoenix. This was early in 2008. Mike Skinner was subbing in the car. AJ could have easily blown off the test and stayed in Las Vegas, but he was committed to turning his deal around.

No, the Red Bull ride didn’t work out. But each year, Allmendinger gradually improved. He persevered through the Gillett Evernham Motorsports mess, accepted the uncertainty at Richard Petty Motorsports and finally broke through with Team Penske.

Despite Allmendinger’s misstep under Roger Penske’s watch, arguably, AJ doesn’t have a stronger ally in motorsports than The Captain. But whether it’s “the committee”, James Finch, Michael Shank, Tad Geschickter or anyone else that believed in The Dinger, sometimes it’s just the act of believing in a kid that allows him to start believing in himself. Some of us never stopped.

Bob’s second point – and yes, I have advocated this for some time – NASCAR needs to add more road courses to the Sprint Cup schedule. It’s by far the best racing on the tour but the sanctioning body keeps insisting on returning to some of its old stale venues. Bob asked why NASCAR doesn’t run additional races at Watkins Glen? While that is not feasible, there are other circuits that could stage an equally entertaining show. (Think Canada - the fans will support it.)

Although I don’t anticipate any new tracks – at least on the Sprint Cup schedule – there might be a few surprises after all. I just wish one of the changes included a road course in the Chase. Bob agrees.

On-track gesturing a thing of the past? Local tracks take action