Ricky Stenhouse Jr. "bummed" not to "finish off" Talladega win

Ricky Stenhouse Jr. knew he had a good shot at a win at Talladega (Ala.) Superspeedway and he came oh-so-close. 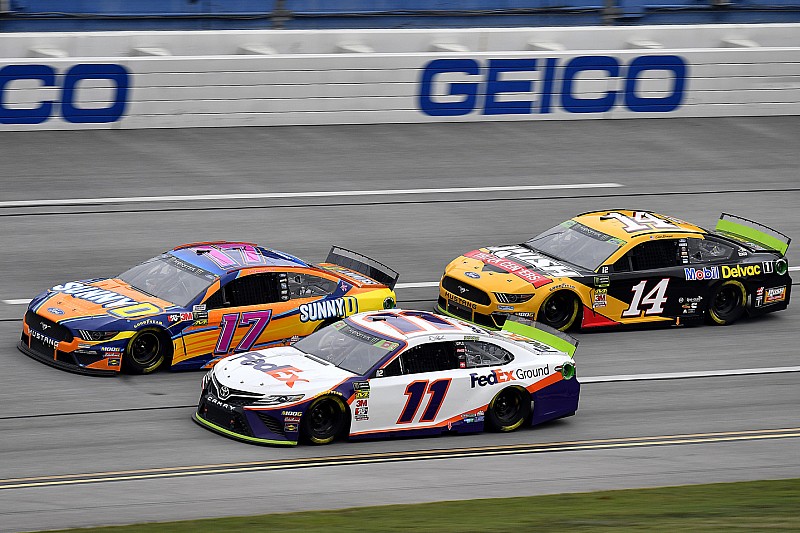 Stenhouse led 32 laps in Monday’s rain-delayed race and all in the final 53 laps of the 188-lap event. And he was pacing the field as late as Lap 180 until Kurt Busch got a push by him on Lap 181.

Two laps later, however, he got collected in an 11-car wreck on the backstretch. His Roush-Fenway Racing team was able to repair the damage enough where he was still in contention when the race returned to green on Lap 187. He restarted 14th and managed a ninth-place finish.

“It’s nice being that close. We put ourselves in the right positions, got to control the race for a little while,” said Stenhouse, who is leaving the Roush organization at the end of the season. “I felt like my spotter and I did a really good job blocking the right lines at the right time and just trying to learn for the end of that race.

“All in all, we had a really fast car. I’m bummed we couldn’t finish it off. There at the end I felt like we were still plenty fast enough to get the job done, but I just ran out of laps to get back up there.”

In an interview Friday, Stenhouse said his team had put a lot of emphasis on preparing for this race.

Stenhouse, 32, said he remains focused on trying to close the 2019 season and his tenure with Roush with the best possible finishes he can.

“I let my team off the track, agent-wise, kind of handle everything beyond that and what we’re going to do for next year and the options and just try and figure that out,” he said. “It’s not a quick process by any means.

“We’ve talked to different teams and just trying to wait and kind of see what direction we go, but, for me, obviously since the week of Charlotte it’s just trying to put solid weekends together.”

Stenhouse hopes for another one next weekend at Kansas. He finished 11th there in the spring and led 11 laps, including three late in the race.

“Earlier this year, being able to battle with (Chase Elliott and Alex Bowman), take the lead there, it gives us some confidence that the package that we had was good, but it was still fresh in the season.

“I feel like the package, team to team, has evolved a lot and what you need in your race car to be fast at Kansas will be different than what we had there in the spring. We didn’t really manage the end of that race very well and gave up definitely a top-five finish, but, all in all, we’re excited to get back there for sure.”