TONY STEWART, NO. 14 OFFICE DEPOT/MOBIL 1 CHEVROLET, met with members of the media at Atlanta Motor Speedway and discussed the first practice session, the importance of bonus points in the Chase and other topics. 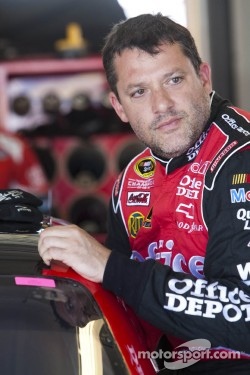 THIRD ON THE BOARD FOR PRACTICE ARE YOU GUYS HAPPY WITH THE CAR SO FAR? “Yeah, I’m pretty excited especially when that was in race trim. It wasn’t a qualifying run; our qualifying run was slower than that. I’m pretty happy with the way it’s taking off.”

YOU AND MATT (KENSETH) TALKED THIS MORNING IS EVERYTHING GOOD BETWEEN YOU TWO THEN? “Yeah, we are fine. It’s like we mentioned earlier in the week, we have too much to do the last 10 weeks to be worrying about each other. It’s just like we always said there are 43 people out there and they are not always going to agree on the track at the same time. The big thing is getting it done and over with now.”

THIS SPORT WAS BASICALLY THRUST INTO THE MAINSTREAM IN 1979 WHEN CALE (YARBOROUGH) AND DONNIE (ALLISON) WENT AFTER IT IN A FIGHT. THE FANS APPRECIATION FOR THAT RAW EMOTION HASN’T CHANGED ANY OVER THE YEARS. WHY DO YOU THINK THAT RESONATES SO MUCH WITH THE FANS? “I don’t know it still makes me wonder why NASCAR won’t let that moment be relived fully. People like emotion every other sport gets a cool off period, every other sport you get time to calm down where our deal it’s a little bit different we don’t have that. It’s not like one play is a bad play and you go to another play the bad deal for us is we are done for the day. That is where it’s different.”

ON YOUR USAC (UNITED STATES AUTO CLUB) SIDE LEVI (JONES) IS GOING TO BE OUT OF THE CAR NOW FOR A SEASON ENDING SURGERY TALK ABOUT HOW DISAPPOINTING THAT IS AND ABOUT CHRIS (WINDOM) THAT IS GETTING IN THE CAR FOR HIM: “We are sad that he is going to be out but the good news is the injury that he has in his neck, doing it now and getting him out of the car and getting him operated on Tuesday is going to get him back to 100 percent. For us that is a lot more important than it is trying to finish out these last 12 weeks with him. We are fortunate to have Chris Windom come in, step in, and help us out these last 12 weeks. We are still going to go out and do the best we can to get caught up in the points now and see what we can get out of it.”

TALKING ABOUT POINTS ON THE NASCAR SIDE LAST YEAR YOU WENT INTO THE CHASE WITH NO BONUS POINTS, HOW BIG WOULD IT BE FOR YOU GUYS TO GET IN TO THE CHASE WITH THOSE BONUS POINTS? “We didn’t have to have any last year to get it done. This year is a different year. You never know until you get in there what it’s going to mean. If you have the option to get nine points or not having nine points I think everybody is going to take it.”

IF YOU GET THAT HELMET BACK WHAT ARE YOU GOING TO DO WITH IT? “Charity auction if I get it back. For some reason it’s MIA (Missing in action).”

Jeff Gordon on Atlanta: You just go out there and do your job