Talladega, a race of opportunity for the underdogs of NASCAR 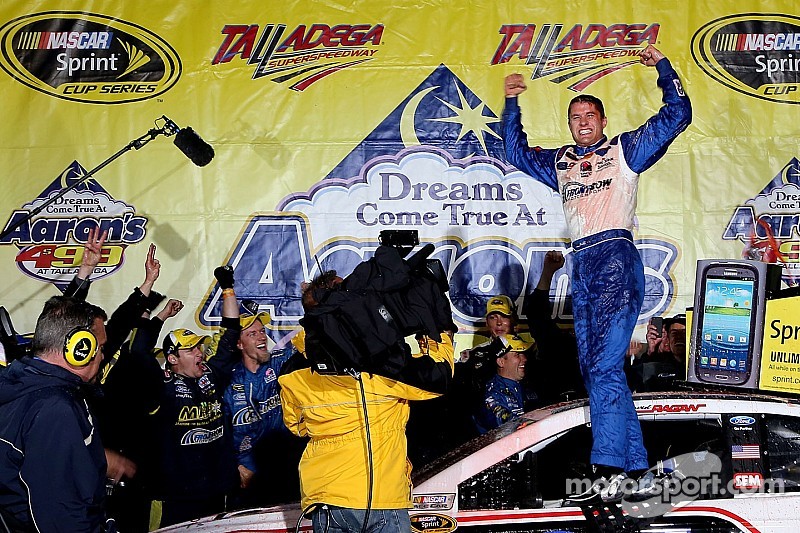 Will today belong to the underdogs of stock car racing, or will the usual suspects end up in Victory Lane?

When those within the NASCAR community think of Talladega Superspeedway, they see photo finishes, the notorious and almost inevitable 'Big One,' and a race any one of the 43 starters could potentially win.

With the new 'win and you're in' championship format, the stakes are higher than they've ever been at the wildcard plate races, a fact not lost on the underdogs of the sport. A win would be season-making but a Chase berth? It could launch a struggling race team to heights they could once only dream of attaining.

Trevor Bayne's 2011 Daytona 500 triumph with the Wood Brothers and Front Row Motorsports' 1-2 finish in the Spring Talladega race back in 2013 are recent examples of David defeating Goliath in these unique and always enthralling events.

Just yesterday in Saturday's Xfinity race, JJ Yeley and Joey Gase busted into the top five, making headlines in the secondary level of NASCAR's national touring divisions. Both their team owner's had never placed so high in well over a decade of NXS participation.

With Talladega being 'the' place for the underdogs of the sport to rise up and shine, here's a list we've compiled of the five most likely 'underdog' canidates to steal a victory today.

Although he doesn't have much Cup experience at the plate tracks, Allgaier does have two things going for him this weekend. The first is momentum with two solid weekends at Bristol and Richmond directly behind him. Secondly is the the fact that a Hendrick motor is underneath the hood of his car. This team and this driver know how to get the most out of their equipment and if they can dance with chaos without tripping today, No. 51 might just steal the show.

Cassill is another driver who has proven his worth on the plate tracks on more than one occasion. Four of his top five best finishes in 160 Sprint Cup starts have come in restrictor plate races and his drafting prowess goes beyond Cup, taking underdog teams to the front in both Xfinity and Truck races in past years. Just last fall, he finished fourth in the NSCS race.

Three of his four career top fives, five of his eight career top tens, and all three of his Sprint Cup poles have come at Daytona and Talladega. Needless to say, he likes this kind of racing. For Front Row, he has finished as high as second, pushing teammate David Ragan to that shocking victory back in 2013. Gilliland is a veteran with over 300 starts and really, an underrated drafting ace.

The son of the 'Buckeye Bullet' has just five previous starts at the Cup level (and only one at Talladega), but my reasoning for placing him second on this list has nothing to do with his lack of experience at the pinnacle of NASCAR racing. Blaney is a proven winner and a smart racer who has a gold No. 21 on the side of his car, which has carried some of the sports greatest to victory over the past few decades. The Wood Brothers Ford is a force to be reckoned with any time we go plate racing and Blaney has already shown that, splitting the Hendrick Motorsports quartet in single-car qualifying.

This is the underdog story just waiting to be written. This team and driver have made tremendous gains as an organization in the past few years. They are a solid group now with the backing from GEICO and the ability in both the garage and behind the wheel to make their NASCAR dream a reality. Mears hasn't won since 2007, Germain Racing is 0 for 217 at the Cup level and the duo have four top ten finishes in their last five plate races. They've had the luck, the speed, and the talent to win ... Now they just need to bust through that glass ceiling and actually do it.

This HM goes to three drivers, who would make some serious noise if they could emerge victorious, but it would be nothing new for the teams they currently compete with. That would be RCR's Brian Scott, who finished second in yesterday's Xfinity race and started from pole in this event, one year ago. David Ragan's impressive resume as an underdog would have put him at the top of this list, had he not been subbing for Kyle Busch in the No. 18 JGR Toyota. Watch out for the soon to be MWR pilot, who has won at both Daytona and Talladega in the past.

Lastly, we have Danica Patrick. The polarizing driver is at her strongest in plate races, possibly because the close, non-stop action every lap is similar to what she dealt with on ovals during her IndyCar tenure. Danica has something to prove as well with long-time sponsor GoDaddy pulling the plug at the end of this year, leaving a massive void on that car. She also has a contract with SHR that she would like to renew...