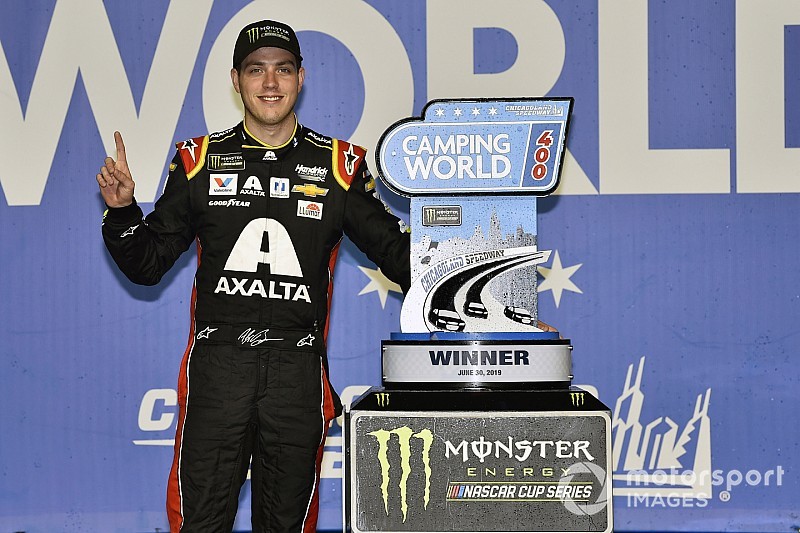 After winning my first NASCAR Cup Series race Sunday at Chicagoland Speedway I said that was all I ever wanted. After some time to let that sink in this week, I was asked, ‘Was it everything I hoped it would be?’ That’s a good question. My answer is probably yes and no. I think that it has been really cool and very special to share with my friends and family and with my race team, but at the same time it was short-lived. We head to Daytona Thursday and try to go get another win. It just makes me want to get a bunch more of them. It’s definitely very special but hopefully it’s not the last of them. I was at a point a couple of years ago that I think it might never happen. To be able to come back from the situations and the cards that I’ve been dealt and then to have the opportunity to drive for Hendrick Motorsports and winning a race for them, it’s really special. Sometimes it’s just hard to put into words what it all means.

I think our intermediate track program has been so strong all year that we knew we were going to be really strong going to Chicagoland. We started the race solidly off of where we expected to be, so we had to make some big changes rather quickly. We were able to make the right decisions on the changes and it worked out really well. I think once we got the lead, I knew we had a good shot at the win. It was really fun to race Kyle (Larson) there for the win. We’ve come a long way in a short period of time I think. I mean, the beginning of this year was rough. I feel like people question me a lot, and if I deserve to be here or not. Just based on the fact that I don’t have a big resume to fall back on. I’ve had a lot of great opportunities throughout my career, but when we went stock car racing, those opportunities got pretty slim. Just getting a Cup win is something that kind of relaxes me in the sense that I feel like I can finally say I deserve to be here.

Taking a leadership role on our team has been something that I’ve struggled with. I’m probably not a very natural leader and my crew chief, Greg Ives, is kind of a different guy as well so we probably both struggled with that more than others. I’ve been working really hard at it and trying to do a better job, trying to stay positive all the time. Sometimes I do a better job of it than others. I feel like I’m not super hard on those around me. I’m just really hard on myself, which is probably something I need to work on at times. It’s one of those things where nothing has been given to me and I feel like – like Dale (Earnhardt Jr.) says, I have a chip on my shoulder that I need to drop. I probably still haven’t dropped it. I just feel responsible for how we run on the weekends, and this is really all I have. I have a great group of friends and family, but it’s not a job to me, it’s my life, and how I run on Sundays kind of dictates my whole week more than it should probably. And Greg and I have had this conversation, it probably does for both of us. We just care a lot.

The win really changes our perspective on the season so much. Our points situation (to make the playoffs) was looking decent but it’s never guaranteed. I think I learned a lot from our (three consecutive) second-place finishes, including things I could have done differently at Dover and Kansas. I feel like I learned a lot from those races and growing as a driver from those experiences will really help moving forward. I feel like we can just be more aggressive, take more chances. I can be more aggressive on things like on green flag pit stops and just little things like that that sometimes if you overstep, it completely ruins your day and costs you a ton of points. We don’t have to worry as much about that and I can work on getting 10 tenths (of a second) out of it so when the playoffs come, I know how hard I can push or can’t push.

Now that all the celebrating is over, it’s time to get back to work. The Hendrick Motorsports organization as a whole has had a lot of success at Daytona as of late. There really couldn’t be a better track to be going to after our first win. This is probably the least stressed I’ll ever be for a superspeedway race, just knowing we have a win. We can just try to go out there and get another one and we don’t have to worry getting caught up in somebody else’s mess if that happens. We’re going to do everything we can to have a great day and end up in Victory Lane again. I think it’s going to be a lot of fun. Our superspeedway cars are always so good that it makes things much more fun than it was previously for me.