The other side of Alex Bowman - Part 9

The last two or three weeks have been some of the most intense I’ve experienced as a Cup Series driver. I guess I like to make things hard on myself at times. You know we kind of put ourselves in a hole at Richmond that we had to go to the Charlotte Roval to overcome and I made that absolutely as hard on myself that I possibly could. I was really glad to go to Dover and have a relatively uneventful and solid day. I think it’s expected that we run really well, especially at the road courses. Our road course program is really strong. I think if we had started that race up front (he started from the rear of the field in a backup car) we could have ended up one spot better at the end. But having to go to a backup car and being able to overcome that and everything else in the race was definitely good.

I was really happy obviously to advance to the next round of the playoffs after the Roval but at that moment I just wanted to get out of the race car and feel better. But it was great to advance and I think we have a legitimate shot to make the Round of 8. That’s been a big goal for us and we really need to make that happen. Obviously, I cut it a little closer in the Round of 12 than I would have liked. Last weekend at Dover went really well for us. I don’t think we were quite as good there as we were in the spring. I just think we had a couple things that I felt like our car did better in the spring that allowed us to pass easier. Still, it was a solid day. 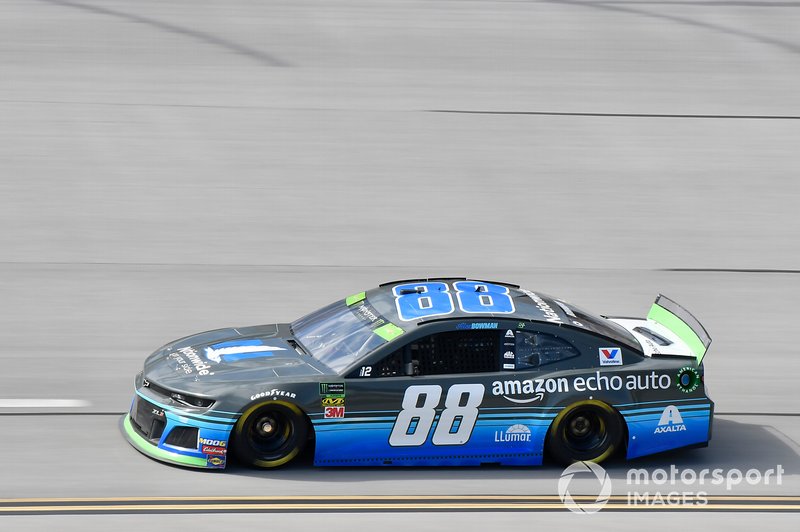 We roll into Talladega this weekend with a lot of positives. Our superspeedway program at Hendrick Motorsports has been really good. We ran well here in the spring (started ninth, finished second). Even though we’re in the playoffs now I don’t think you can really change anything as far as how you approach this race or trying to do things different. I feel like when you do that you open yourself up to making mistakes. We’ll probably be business as usual. Stage points will be pretty crucial – they may even be more important than finishing position right now. We need to go out and get good stage points and then tackle being there at the end of the race and try to get a win.

I think for the most part Sunday will be a normal superspeedway race. You’ll have different groups of guys working together and it will be who can out-strategize and out-race car the other guys. I feel like manufacturer teamwork aspect we’ve seen of late is changing every race and kind of evolving every race. It’s too much of an advantage not to do it.

I’ll have another new look on my No. 88 Nationwide Camaro ZL1 in the race Sunday. I think it looks really cool. Besides the color change, we have Amazon Echo Auto on the car. I didn’t really know about it or hear anything about it until I walked in (the shop) and saw it when I went to film a commercial with Dale Earnhardt Jr. two or three weeks ago.

This is another cool thing that Nationwide is doing. They are giving away 1 million Echo Auto devices to new and existing auto insurance policyholders (in states where it’s permitted). As part of the deal, Nationwide is introducing three new features to its skill for Alexa – a new driver checklist, roadside assistance and road conditions. Those are all things people can use. If anyone is interested, feel free to visit Nationwide.com/echoauto.

I’ve been having a lot of fun lately driving my new truck, which you may have seen on social media. I have never been one to buy someone else’s project – I really hate doing that – but I bought someone else’s project. The guy that built it is from Texas. He’s a super-cool guy and been very helpful. It’s a 1956 Chevy T-10. It’s black like everything else I own. It’s on air-rides, it’s on the ground. It cruises really nice.

So Kyle Larson and I work out together on Tuesdays and this week he showed up in his 1969 Chevy C-10, which is fairly stock, frame-off restoration that is super-nice. He had Miles the Monster in his passenger seat (from winning at Dover last weekend) and I was a little jealous so I had to get back at him a little bit on social media and let him know his truck didn’t look good enough.

William Byron holds off Logano for Stage 1 win at Talladega