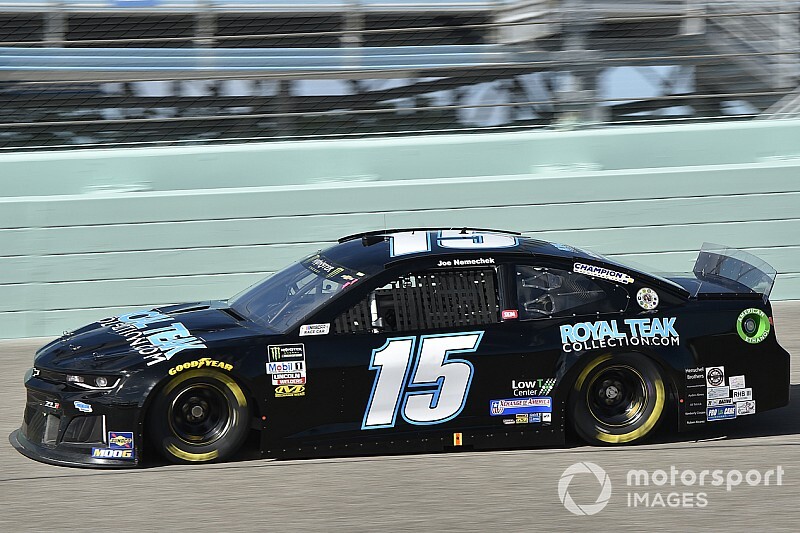 The three teams worked to ensure the No. 27 car would place higher in the owner standings than the No. 96 Gaunt Brothers Racing entry, making them the highest placing non-charterered team. There is a significant amount of money on the line for the top Open team at season's end.

In the closing laps of the race, the No. 15 of Joe Nemechek, the No. 77 Reed Sorenson and the No. 52 of Josh Bilicki all exited the race with mechanical issues, promoting the No. 27 of Ross Chastain to 35th in the running, enough to place the car ahead of the No. 96 in the final standings.

There was also suspicious radio chatter from Premium Motorsports' Competition Director Scott Eggleston, who has been fined $25,000 indefinitely suspended from NASCAR.

“Following a thorough review of race data and driver/team communication from the season finale at Homestead-Miami Speedway, as well as interviews with several competitors, NASCAR has determined that the Nos. 15, 27, 52 and 77 teams have violated Sections 12.8.g and 12.8.1 of the NASCAR rule book, which addresses manipulating the outcome of a race. As a result, those teams in violation of the rule book have been penalized as listed in the penalty report," NASCAR Senior Vice President of Competition Scott Miller said in a statement.

Additionally, all three teams have been fined $50,000 and lost 50 owner points each. Along with Eggleston, the competition director (Kenneth Evans) of Rick Ware Racing has been fined $25,000 and indefinitely suspended from NASCAR.

The Gaunt Brothers Racing car is now credited as the top non-chartered team.

Spire Motorsports, the winners of the July Daytona race with Justin Haley, have a released a statement following NASCAR's decision:

“Following the season finale at Homestead Miami Speedway, NASCAR assessed a penalty against Spire Motorsports for the actions of an individual who made a judgment call on behalf of our team. While the ultimate outcome of that decision can be interpreted from different perspectives, we regret any appearance of operating outside the spirit of the rule book. We accept the penalty and will not appeal. We’re proud of all we accomplished with this team in our first season and look forward to getting back to the business of racing at Daytona in February.”