Ron Fellows to Run No. 36 Golden Corral Chevrolet at The Glen; Blaney in the No. 35 Chevrolet

Fellows, a three-time American Le Mans Series GT Drivers Champion, spent most of his career driving for the Corvette Racing team. He made his first NASCAR Sprint Cup Series (NSCS) start in 1995 at Watkins Glen International. Since his NASCAR debut, the Canadian native made 56 starts in NASCAR’s top-three series, including 22 starts in the NSCS, and talliedfour NASCAR Nationwide Series and two NASCAR Camping World Truck Series wins. Fellows collected two second-place finishes and five top-10 finishes in his 22 NSCS starts. 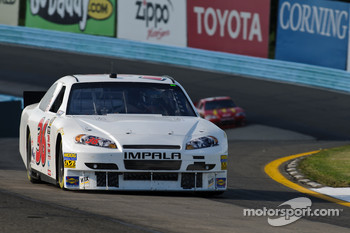 The Toronto native’s most recent NSCS start was with TBR at Watkins Glen International last summer. Fellows was poised for a good finish when a broken suspension ended the team’s day early. Fellows will also reunite with Crew Chief Philippe Lopez. The pair worked together in 2007 for Hall of Fame Racing. A late-race pit road speeding penalty turned a shot at a win into a fourth-place finish during the pair’s only race at Watkins Glen International.

“I am excited to pick up where we left off last year,” commented Fellows. “It is always great to be a part of the Sprint Cup race at Watkins Glen. We had a decent qualifying run last year at the Glen, but then didn’t finish the race after we were running inside the top-15. Although it is a year later, we are just looking to build on that.”

“We had pretty good success last year until we were wrecked halfway through the race,” explained TBR owner Tommy Baldwin. “We want to finish what we started last year. It’s always good to have a road course ringer, and Ron is the best of them. Dave has done a great job for us this season, so we are excited to field the 35 car for him as well.”

Fellows and Blaney will take to the 2.45-mile road course Friday for practice. Blaney will work to qualify the No. 35 Chevrolet on Saturday for Sunday’s 90-lap event.

Road course 'ringers' in Cup: A thing of the past?

Tommy Baldwin to enter Daytona 500 with Sadler driving No. 7 entry

The other Pocono upset: Regan Smith snags third for TBR